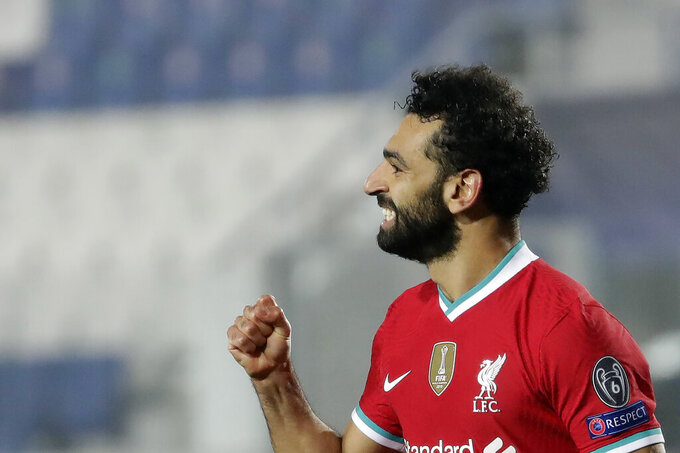 FILE - Liverpool's Mohamed Salah celebrates his goal against Atalanta during the Champions League, group D soccer match between Atalanta and Liverpool, at the Gewiss Stadium in Bergamo, Italy, Tuesday, Nov. 3, 2020. Salah has tested positive for the coronavirus. The announcement was made by the Egyptian soccer association on Twitter, Friday, Nov. 13, ahead of Saturday’s game against Togo. (AP Photo/Luca Bruno)

CAIRO (AP) — Egyptian soccer star and Liverpool striker Mohamed Salah has tested positive for the coronavirus, the Egyptian soccer association said on Twitter on Friday, on the eve of the game against Togo.

Salah, who has so far shown no symptoms of COVID-19, the illness caused by the novel coronavirus, was immediately isolated in his hotel room, Egypt's national team said.

The Premier League Golden Boot recipient had recently arrived in his home country to join the national soccer team, the country's beloved Pharaohs, in the two upcoming games of the latest round of the 2021 Africa Cup of Nations qualifiers. Egypt is set to face Togo in Cairo on Saturday, and in Togo’s capital, Lome, on Tuesday.

All those who were exposed to him have also been quarantined, added the Egyptian team’s statement. The statement did not name any of the players. It was also unclear if any other players would miss out on the games with Togo.

Later, a statement tweeted by the Egyptian Football Association said another round of tests will be taken by three players from the Egyptian and the Togo teams who had tested positive in the first round.

Photographs and videos of Salah — in some of the images, without a face mask to protect against the virus — dancing among dozens of people at his brother’s wedding, held earlier this week in Cairo, have gone viral on the social media over the past days.

Salah was the first Egyptian player to become a Premier League champion — global stardom gained on the strength of a single brilliant season with Liverpool, which he joined in 2018 from Roma — and is beloved among fellow Egyptians who see him as a sign of hope for a third-world country battered by poverty and years of political turmoil. His international success has also been hailed by the country’s authoritative government.

The 2021 Africa Cup of Nations qualifiers resumed on Wednesday after almost an eight-month suspension due to the global pandemic.