Lock fires back at dance critic, will keep busting moves 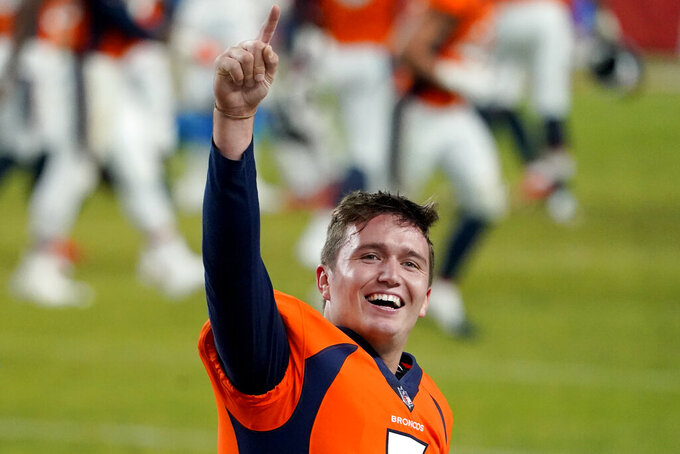 ENGLEWOOD, Colo. (AP) — Drew Lock insists he won’t let his guard down now that he has a signature comeback on his resume. What he promises to keep doing is letting his hair down.

The Broncos quarterback who’s known to start spittin’ lyrics on the sideline busted out some dance moves after capping Denver’s 21-point comeback against the Chargers with a 1-yard TD toss to KJ Hamler as time expired.

That prompted Fox Sports Radio host Colin Cowherd, once one of Lock’s biggest fans, to lump him in with some famous QB busts who were also demonstrative.

Lock, who is 6-3 in games he starts and finishes, laughed off the criticism Thursday when the Broncos practiced for the first time since Sunday’s furious fourth-quarter rally.

“That person just might not be able to dance as well as I do,” Lock deadpanned. “No, I would be sour that way, too. We’ll see, hopefully, my dance moves get better in the public eye because I promise they’re probably not going to stop.”

Lock said he doesn’t choreograph his celebrations, and he’s surprised national media are still talking about his dance moves because they started way back at Missouri.

“And quite honestly, it brings the offense together. We all have a lot of fun doing it,” Lock said. “It brings a fun joy to talk about it, even go back afterward and watch it and be like, ‘What were you doing right there?’ It’s just a fun thing we all like to do.

“I’m part of a younger generation of football that might have a little more fun as far as dancing goes,” Lock added. “I’ve been a music guy my whole life and that’s kind of who I am.”

Lock wasn’t breaking out too many moves before Sunday. After throwing a touchdown pass on the Broncos’ second drive in the opener against the Titans two months ago, he sprained his right rotator cuff in Week 2 and missed several weeks.

He returned at New England last month and became the youngest quarterback — he turns 24 next week — ever to win at Gillette Stadium despite all six of Denver’s scoring drives ending in field goals.

His streak without a touchdown throw reached 45 drives Sunday before he threw a 9-yard TD pass to fellow Missouri alum Albert Okwuegbunam, followed by a 40-yard touchdown toss to DaeSean Hamilton before his 1-yard strike to Hamler.

Lock said that outburst doesn’t mean anyone’s exhaling as the Broncos (3-4) prepare to visit the Atlanta Falcons (2-6) on Sunday.

“We can definitely build off of it,” Lock said. “I don’t know if it takes any load off anybody’s shoulders. Because if it does, then I guess you’re probably not made out for this job. If you let your guard down, come in a little relaxed one week, you’re going to come in and probably not fare too well this week.”

The common denominator in the three TD drives was going up-tempo after falling behind 24-3. Asked if he’d go no-huddle earlier in the game to help Lock get into a groove, offensive coordinator Pat Shurmur said, “It’s a good question. There’s probably times when it would make sense. Then there’s also other times where you’ve just got to do things better earlier in the game not to be put in that situation.”

Lock, for one, loves to floor it.

“You’re talking to a pretty biased quarterback here that went up-tempo for I think three of my four years in college,” Lock said. “So, I would definitely say I do enjoy that. But at the same time in the NFL game there is a time to do it, and I feel like we do balance it pretty well.”

Coach Vic Fangio gave the Broncos Monday off and all NFL teams had Tuesday off for Election Day. A couple more COVID-19 cases forced the Broncos to cancel Wednesday’s practice. They also canceled a practice last week when guard Graham Glasgow was infected with the coronavirus.

“It’s upsetting because you want to come in and see the guys, especially after a win,” Lock said. “You know, it’s always fun the next day in the locker room after a game. We all know what happened but everyone’s got their own story they like to tell from the game and hang out. But with back-to-back weeks with us having to be home, it sort of feels like the normal.

“And we’ll have to make it the normal if it comes down to that.”