A look at NFL training camps in a most unusual preseason 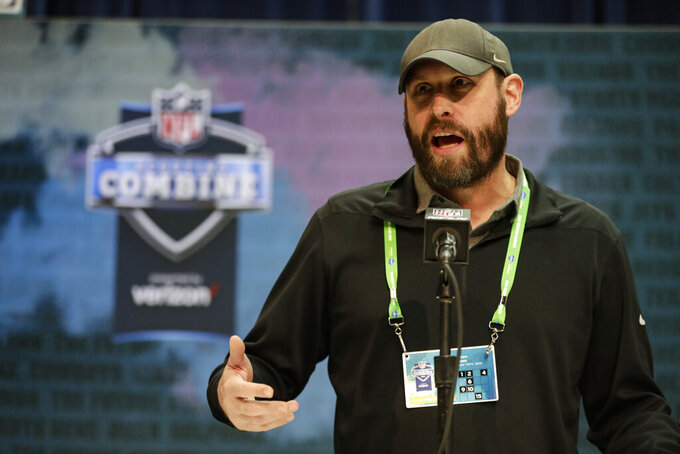 FILE - In this Feb. 25, 2020, file photo, New York Jets head coach Adam Gase speaks during a news conference at the NFL football scouting combine in Indianapolis. Now that more NFL players have opted out of the 2020 season than did men in MLB, the NHL and NBA combined, what about coaches? Gase, a member of the coaching kiddie corps at age 42, has addressed the situation of coaches getting sick. (AP Photo/Michael Conroy, File)

Now that more NFL players have opted out of the 2020 season than did men in MLB, the NHL and NBA combined, what about coaches?

People in their 60s, for example, are considered more susceptible to the coronavirus than the general public. Seattle's Pete Carroll is the NFL's oldest head coach — impossible to tell from his boundless enthusiasm and youthful look. Carroll will be 69 next month.

New England's Bill Belichick is 68, Kansas City's Andy Reid is 62 and Denver's Vic Fangio will turn 62 in two weeks. There are dozens of assistant coaches 60 or older.

The Jets' Adam Gase, a member of the coaching kiddie corps at age 42, has addressed the situation of coaches getting sick.

“That’s something that we actually started talking about in April," Gase says. "I’ve looked at it as we almost have a depth chart for myself, the coordinator spots. We talked about position coaches, kind of where that would go. So, a depth chart was really created.

“I think the biggest concern at the time when we first started talking about it was special teams and making sure that we have guys in the meeting room learning what (special teams coach Brant) Boyer’s teaching. And helping out in that aspect because normally you’ve got your two special teams guys and everybody else is worried about their own deal.

“So, now it’s the whole staff. We all have to be on the same page. Guys have to understand, hey, you don’t know, you might be the next play caller, whether it be offense, defense or special teams, so everybody’s got to prepare like that. And it’s just like the players."

Fangio doesn't believe age is a major factor — nor should be — in being careful during the pandemic.

“I don’t think it matters where you are in your coaching career experience-wise," he says. "This is new for everybody. No one has experience in this. I always like to say, ‘The great ones can INA,’ which means improvise and adjust. We want to be a bunch of great ones here and excel at improvising and adjusting. There’s no wiggle room.

"The protocols are what they are. We’ve got to abide by them and move past it.”

Tennessee Titans players have been praising one of their own, offensive lineman Dennis Kelly, for his leadership during the pandemic. He is the team's player rep, and he takes the role seriously.

“I think Dennis would be an unbelievable dictator in any country, as the way he’s been handling the mask thing,” Titans tackle Taylor Lewan says. “And so, although it’s been very annoying, he’s doing a good job, and I hate even saying that out loud. Dennis is a really good friend of mine, so I hate doing the 'boy compliments.' But Dennis and I actually got into it about me, and my mask was below my nose. So he made sure and told me the protocols of what to do. And so, he’s been doing a good job. He’s definitely not worried about being annoying in that sense, which is good.”

Safety Kevin Byard says Dennis Kelly, the team’s player rep, has been a stickler for details when it comes to the new procedures.

“We’re all getting used to these new rules, and protocols, and wearing a mask, and stuff like that. I think it’s good,” Byard said.

The Pro Football Hall of Fame has introduced a stand-alone entity to assist in the delivery of medical care called Hall of Fame Benefits. The new venture is a partnership between Hall of Fame Health and Key Benefit Administrators, the nation’s largest independent third-party benefits administrator, based in Indianapolis.

Hall of Fame Benefits is launching a platform to assist former players and all others associated with the game in procuring comprehensive health insurance as well as other concierge-level assistance and services. It not only includes assistance with insurance coverage, but also ensures access to care; navigation of providers; making sense of bills; and helping patients in need secure financial assistance.

“Hall of Fame Benefits has been our primary focus from Day 1, as it’s hard to imagine a more impactful program for former players and their families,” says Jeremy Hogue, president and CEO of Sovereign Healthcare, the hall’s partner in Hall of Fame Health. “Getting insurance coverage, and having experts assist with making sure it’s the right coverage, and then providing unparalleled support throughout the year — it’s going to make a big difference in the lives of a lot of people. And our hope is that this is just the beginning, as we have plans to greatly expand our options for former players in the years to come.”