Louisiana session ends in flurry of tax and financial votes 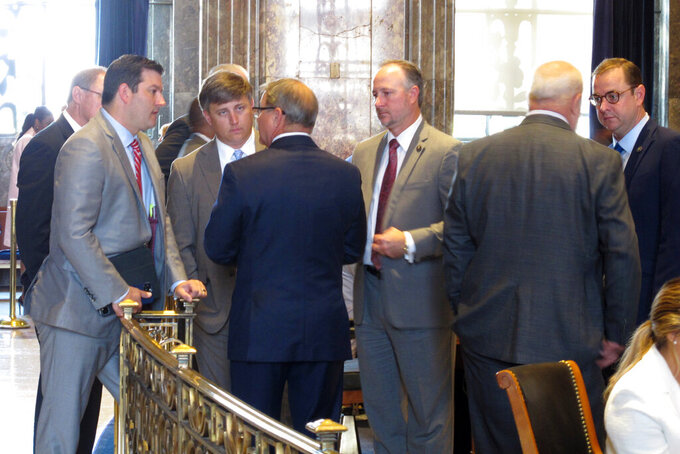 Years of cash crunches and financial worries gave way to a budget largesse, with federal pandemic assistance pouring into Louisiana along with an unexpected boom in state tax collections. The majority-Republican Legislature used the new cash to give pay raises to teachers, boost spending on public colleges and student aid programs and steer tens of millions to pet projects back home.

Federal dollars will pay for road and bridge work, water system improvements, tourism marketing, hurricane recovery and grant programs to businesses. Some of the aid will help shore up the state's nearly-bankrupt unemployment trust fund.

The House and Senate brokered a bipartisan deal in the dwindling hours of session on a complicated set of tax swaps they hope to persuade voters to pass in the fall election, arguing the measures will bring more sustainability to the state’s tax structure by disentangling it from federal tax payments.

“This is a monumental moment and a monumental session for this Legislature,” said Republican House Speaker Clay Schexnayder.

Shortly before they wrapped up, lawmakers agreed to shift about $300 million a year in the sales taxes charged on purchases of cars and trucks to road and bridge work, and away from the state general fund where it helps to pay for health care, education and other government operations. The shift would be phased in over two years starting in 2023, with some provisions for lessening the size of the transfer if the state faces budget gaps.

Gov. John Bel Edwards described the session as “all in all a very good effort” from lawmakers, and said he expects to sign the tax swap bills tied to voter approval. But the Democratic governor was iffier on the vehicle sales tax shift for infrastructure. He worried about the impact on other services by reshuffling the money.

“There's a lot of question marks out there,” Edwards said.

The House and Senate also agreed to exempt purchases of diapers and feminine hygiene products from state sales taxes, starting next year, and to continue an expanded tax break that helps the working poor, called the Earned Income Tax Credit, through 2030.

Across the session, lawmakers crafted the regulations for sports betting to start as early as this fall. They agreed to expand Louisiana's medical marijuana program and eliminate jail time for possession of small amounts of pot for recreational use. And they enacted tougher regulations for how colleges must respond to allegations of sexual assault, harassment and other misconduct — legislation that grew out of a recent scandal at Louisiana State University.

Edwards was expected to veto measures sent to his desk to ban transgender athletes from competing on girls' sports teams in schools and to do away with the permitting requirements to carry a concealed handgun. The governor on Thursday issued line-item vetoes to state budget bills, striking a few legislative pet projects and language that would have given lawmakers more oversight of agencies' financial decisions.

The governor, an avid backer of the coronavirus vaccine, also seemed likely to reject a bill passed Thursday to prohibit government agencies from refusing to issue licenses, permits and degrees or barring access to public facilities to someone who isn’t vaccinated against COVID-19. The ban would remain in place until the vaccination has full authorization from the U.S. Federal Drug Administration, rather than an emergency use regulation.

Edwards had a light agenda and largely negotiated financial and other deals with lawmakers behind the scenes rather than taking a high profile for the session.

Fights over social issues — such as how to address police misconduct and how to teach issues of race in schools — provoked racial tensions in the House mid-session that threatened to derail the tax restructuring priorities of Schexnayder and Republican Senate President Page Cortez. But Schexnayder, who was elected with the help of Black lawmakers, managed to steer the chamber through the feuds, at least enough to broker the tax deals.

If approved by voters statewide, the main tax proposal would get rid of personal income tax and corporate tax deductions for federal income taxes paid in exchange for lowering the state's income tax rates. Louisiana also would permanently eliminate the corporate franchise tax for small businesses and lower the tax rate for others.

The tax package is more generous to corporations than individual taxpayers.

Complaints that Louisiana's tax structure is riddled with loopholes that make the system less fair went unaddressed this session, amid opposition from special interest groups and business lobbyists.