Louisiana shopped the globe for protective gear in pandemic 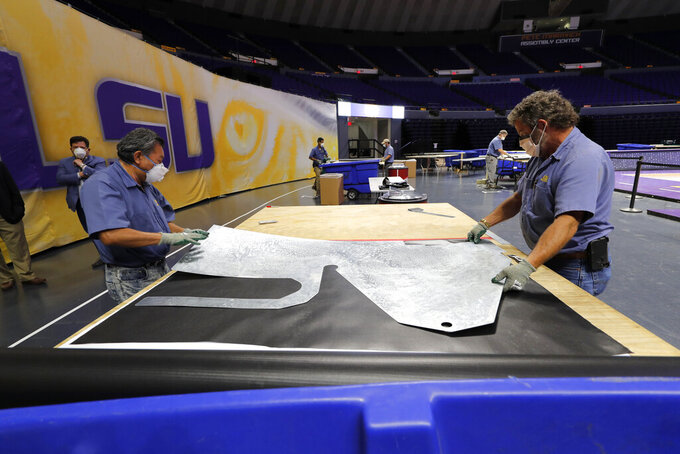 Workers lay a stencil onto material as they manufacture personal protection equipment for hospitals, on the Louisiana State University campus, in response to the coronavirus pandemic, in Baton Rouge, La., Friday, April 17, 2020. (AP Photo/Gerald Herbert)

BATON ROUGE, La. (AP) — Louisiana sent tens of millions of dollars to companies around the country and as far away as China for masks, gloves and ventilators in the early months of the coronavirus pandemic, with $87 million steered toward face coverings alone.

The state, competing against more populous ones that have greater purchasing power, scrambled to equip hospitals, nursing homes, first responders, chemical plants and others with protective gear and medical devices as its first coronavirus outbreak began in the New Orleans area and then crept across the state.

“We zero out the warehouse every day,” Gov. John Bel Edwards said in late March, describing a crushing need for inventory. “To say that demand is outpacing supply would be a gross understatement.”

Amid the rush for supplies, Louisiana found itself paying well above states' average on certain items, an Associated Press review of data across states shows. One company that consistently sold Louisiana items at higher prices than other vendors, Garner Environmental Services, has ties to former Louisiana State Police superintendent Mike Edmonson.

Louisiana's homeland security office — which was tasked with scouring the globe for limited equipment — bought coveralls, gowns, masks, gloves, thermometers and ventilators from businesses across 26 states, the District of Columbia, Canada and China, according to records documenting nearly $150 million in purchases from March 13 through June 25.

Nationally, the AP found that states spent more than $7 billion this spring for personal protective equipment and high-demand medical devices such as ventilators and infrared thermometers. The data, obtained through public records requests, covers the period from the emergence of COVID-19 in the U.S. in early 2020 to the start of summer.

Amid the scramble, Louisiana sometimes found itself paying prices that were well above the averages of what other states were charged.

“At the beginning of this pandemic, (the homeland security office) worked very hard to source critical supplies anywhere we could. While price was certainly a consideration, the most important consideration was availability and delivery timeframe,” Mike Steele, spokesman for the Louisiana Governor's Office of Homeland Security and Emergency Preparedness, said in a statement.

Prices set by Texas-based Garner Environmental Services, a disaster response and recovery company that also sold protective gear to Florida, often were out of step with the average prices charged for equipment across states. Louisiana bought $3.4 million in items from the company in March, the first month of the state's outbreak.

The company charged Louisiana $105.40 for each thermometer it sold the state in the data obtained by The AP, above the $79 average found across states. It charged $22.94 for each of 10,000 face shields, well above the $4 average. And Louisiana paid the firm $10.29 for each of 20,000 protective gowns, while the average per item spent by states for that equipment was $6. Garner also exceeded the average across states on N95 masks.

Garner directed questions to its parent company, K-Solv Group. Calls and an email to a company spokesperson weren't returned. Edmonson, who retired from his state police position in 2017 amid a series of controversies, is a consultant for K-Solv.

Steele, the spokesperson for Louisiana's homeland security office, said the agency knew of Edmonson's representation of Garner “in some capacity,” but he denied any preferential treatment for the company.

“The decision-making was driven by availability of the resource. If it was available and could be shipped quickly, the demand in our state required we obtain as much as we could as quickly as possible,” he said.

He said supply chains stabilized in later months, "and we were able to adjust our strategy to focus less on delivery timeframes and more on price.”

Since March, Louisiana has spent $234 million on protective equipment and devices, according to the homeland security department — 64% of it in those early months reviewed in detail by the AP. The state also spent at least $200 million to outfit the New Orleans convention center as a temporary hospital, which ended up little-used as the feared overruns of hospital capacity in the city never materialized.

Louisiana expects reimbursement from the Federal Emergency Management Agency for much of the spending.