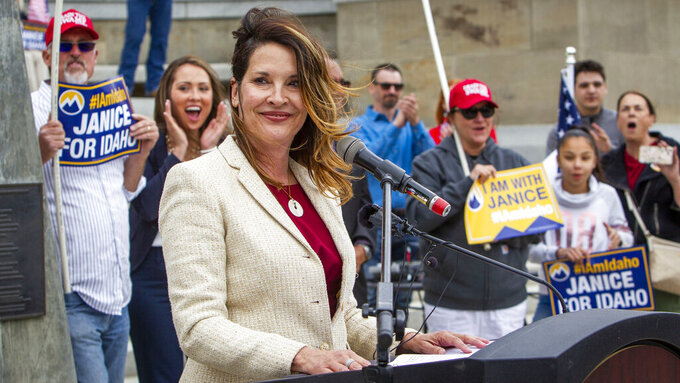 Lt. Gov. Janice McGeachin announces her candidacy to become governor of Idaho at a rally on the Statehouse steps, Wednesday, May 19, 2021, in Boise, Idaho. (Darin Oswald/Idaho Statesman via AP)

BOISE, Idaho (AP) — Lt. Gov. Janice McGeachin announced Wednesday that she is running for governor, aligning her campaign with an emphasis on individual liberty, state sovereignty and traditional conservative values sure to play well in the deeply conservative state.

“My proven experience shows that I will always defend these principles,” the 58-year-old Republican said in a speech in Idaho Falls where she and her family own several businesses.

McGeachin, who served in the Idaho House of Representatives from 2002 to 2012, planned additional speeches in Boise and Coeur d'Alene later in the day.

McGeachin made her announcement and frequently attacked coronavirus restriction decisions following about 50 minutes of speeches by several other speakers and was followed by a Republican state representative who gave his endorsement.

“You will certainly not be required to wear a mask” in the governor's office if she wins, she said. “Simply put, the status quo has got to go. Idahoans are tired of being ignored, shut out of the process, declared nonessential and discriminated against by the state.”

Little never issued a statewide mask mandate, but early last year he issued a stay-at-home order and declared some jobs nonessential as COVID-19 patients threatened to overwhelm the state's hospital system. The move was credited for bringing down the state's coronavirus caseload, but unemployment rose. Coronavirus infections then surged again in the summer after Little lifted the restrictions.

McGeachin during her speech frequently criticized pandemic restrictions as evidence of an out-of-control government. She did not mention the 190,000 Idaho residents who have been infected with the virus or the more than 2,000 that have died.

There are no statewide coronavirus restrictions currently in place and many local government entities have lifted mask mandates as more people get vaccinated. But Idaho has one of the lowest vaccination rates among U.S. states — 31%.

McGeachin said that Idaho officials should reject federal funding for a wide variety of programs to preserve state sovereignty, a position that aligns her with the far right of the Idaho Republican party.

The state receives billions of dollars annually from the federal government for everything from healthcare to education to roads. McGeachin did not provide details on how big cuts to state services that would lose the federal funding would be avoided or handled.

“We must do our part to get our fiscal house in order even if it means weening ourselves of the federal teat,” she said, without going into details.

She added: “We don't have a tax problem here in Idaho. We have a spending problem."

McGeachin also said she wants to eliminate the state's occupational licensing requirements covering jobs ranging from plumbers to medical professionals. The licensing rules are aimed at ensuring that workers can competently perform their jobs without risking the health of others.

“We can open more doors to success by removing occupational licenses and other regulations which stand in the way of personal and business achievements,” she said.

She said she would be a strong advocate of Second Amendment gun rights, an essential position for Republicans seeking office.

McGeachin drew criticism during the 2019 legislative session for posing with members of an antigovernment group in the Statehouse near her office and posting the images on social media.

Later, after fulfilling her role as lieutenant governor presiding over the Senate, she fled from reporters seeking comment and stayed locked in her office the rest of the day as reporters waited outside.

McGeachin last month formed the “Task Force to Examine Indoctrination in Idaho Education,” something hardline conservative Republicans focused on during the recently concluded legislative session. They claim students are being forced through critical race theory to adopt beliefs that make them hate their country.

Little is in his first term and has not announced whether he plans to seek a second term.

But on the same day as McGeachin’s announcement, he issued a statement promoting his conservative credentials that highlighted legislation he signed involving tax relief, infrastructure investments and conservative budgeting.

The GOP holds its gubernatorial primary in May 2022 and the winner moves on to November 2022 general election but is almost certain to beat whoever the Democrats nominate.