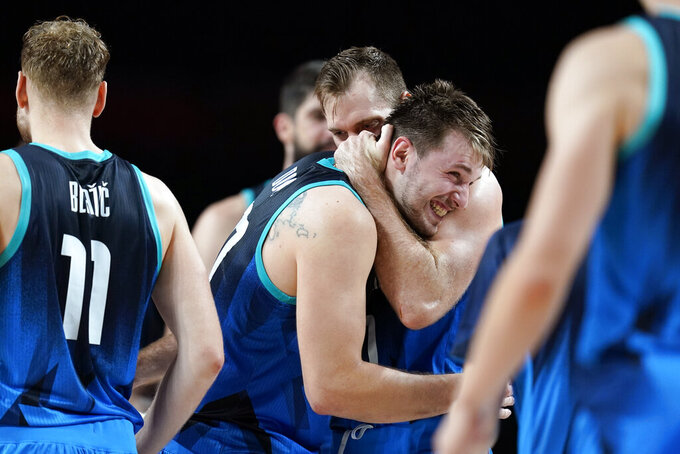 Slovenia's Luka Doncic celebrates with teammates at the end of a men's basketball preliminary round game against Spain at the 2020 Summer Olympics, Sunday, Aug. 1, 2021, in Saitama, Japan. (AP Photo/Charlie Neibergall) 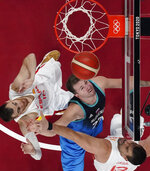 SAITAMA, Japan (AP) — Luka Doncic’s first Olympics have not been perfect, despite what the basketball standings say. He was defeated. Once. By the rules.

Doncic was looking for tickets to go watch men’s tennis when Novak Djokovic was playing in the men’s semifinals. Ordinarily, the world’s top athletes have no problem getting into other Olympic events when their schedules allow. But at the Tokyo Games, amid a pandemic, there are very strict policies about what athletes can do and where they can go. As such, Doncic’s plea for tickets went unfulfilled.

He settled for watching “everything on TV,” Doncic said.

Another marquee event is coming up Tuesday, that being the men’s basketball quarterfinals at the Tokyo Games. Doncic won’t have tickets to those, but won’t need them, either. He’ll be on the court when Slovenia takes on Germany for a berth in the medal round, a step that would put his basketball-crazed homeland even more on the sport’s map and potentially send his stock soaring even higher.

“We have, obviously, the best player in the world,” Slovenia coach Aleksander Sekulic said.

Doncic is certainly in the conversation about being the world’s best. As far as being the best player in the Tokyo Games, there’s no argument.

Through the group stage, Doncic led the Olympic men’s field in scoring at 28.3 points per game, 6.0 points ahead of Japan’s Rui Hachimura. He’s second in rebounding at 10.7 per game, behind only Slovenian teammate Mike Tobey’s 13 per contest. And he’s third in assists at 7.0 per game; Tomas Satoransky of the Czech Republic averaged 8.7, Spain’s Ricky Rubio is averaging 7.3.

No men's player has ever finished an Olympics averaging Doncic's current numbers. And nobody has averaged 28.3 points in an Olympics since Brazil's Oscar Schmidt — the Olympic standard for just about every men's scoring mark — averaged 42.3 per game at Seoul in 1988.

His impact is all over the court.

Nobody in this men's tournament has drawn more fouls, by a wide margin, than Doncic. He’s also tied for the Olympic lead in blocked shots, is shooting a ridiculous 75% on 2-pointers, is one of five players in the Olympics with at least 10 makes so far on 3-pointers. He had a 48-point Olympic debut, tying him for the second-highest scoring game in Olympic history, and was one assist shy on Sunday against Spain from posting what would have been the third triple-double ever at a games.

“He is the best player in the world, including the NBA,” Argentina coach Sergio Hernandez said. “If there was any doubt in my mind, it is there no more.”

For as good as Doncic is with the Dallas Mavericks, he’s been impossible to beat in his nation’s colors.

Slovenia’s senior team is 16-0 with Doncic in the lineup. He was a teenager on the team that captured the European championship in 2017 behind Goran Dragic’s MVP performance, a win that remains, for now anyway, the top achievement in Slovenia’s basketball history. Dragic insisted — not predicted — when that tournament was over that Doncic would be an NBA “superstar.”

“They could win this,” Dragic said earlier in these Olympics, watching from his Slovenia home.

Slovenia surrounded Doncic for these Olympics, and the six-team qualifier it had to win last month just to get to Tokyo, with plenty of shooters who space the floor for his game and a big man like Tobey — who played at Virginia — to provide the inside help needed. The formula has worked all summer; Slovenia is 7-0 with an average winning margin of 26.4 points per game.

A win over Germany on Tuesday, and they’re in the medal round in their debut Olympics.

The U.S. came to Tokyo with 12 NBA players, a past MVP and NBA Finals MVP in Kevin Durant, seven players who have played for an NBA title, five of them who have actually won championships. Top to bottom, the talent the Americans have overshadows every team, Slovenia included.

But Doncic grew up playing the international style, obviously. He knows how the game is called. He knows the nuances. He’s used to playing with a ball that differs from the feel and bounce of the NBA ball. For him, the transition between playing for Dallas and playing for his country has been seamless. Not every NBA standout in Tokyo can say the same.

“Luka Doncic is one of the best four or five players in the world right now,” Japan coach Julio Lamas said. “But he plays very comfortably in FIBA with the spacing and the rules. Some other NBA players feel uncomfortable sometimes in FIBA. He don’t. He is excellent in all the game situations.”

Doncic wants no part of the best-player conversation. He won’t even discuss an offseason of change with the Mavericks — Jason Kidd taking over for Rick Carlisle as coach, changes in the front office, changes to the roster — until the Olympics are over. He’s locked in solely on playing for gold, nothing else.

Besides, he doesn’t need to rave about his own play. Everyone else already is doing that for him.

“I’m happy that I can witness and play with him,” said Slovenia guard Zoran Dragic, Goran Dragic’s brother. “He’s such an awesome guy and it’s so easy to play with him, because he’s just an unbelievable person and basketball player. Yeah, we can be all happy that he’s Slovenian.”