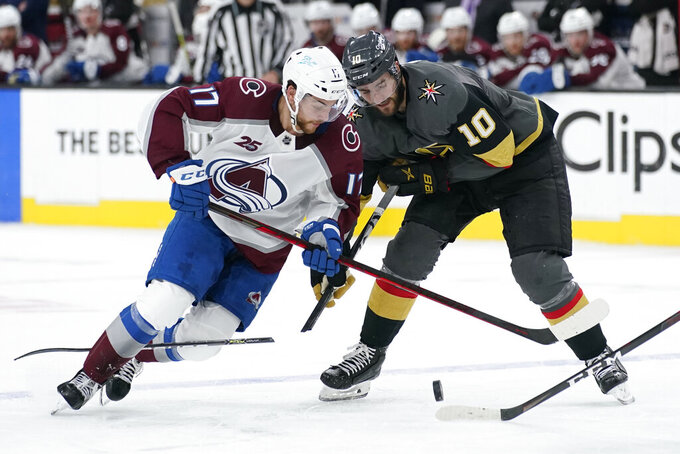 DENVER (AP) — Nathan MacKinnon didn't really want to hear about how the Colorado Avalanche remain squarely in a win-it-all sort of window and how there's always next year.

The speedy forward has grown tired of such talk.

This is the cold, hard reality: MacKinnon and the top-seeded Avs are done in the second round for a third season in a row.

The latest chapter was a 4-2 series loss to Vegas after winning the opening two games — and following a first-round sweep of the St. Louis Blues.

“There's always next year — it's all we talk about, I feel like. I’m going into my ninth year next year and haven’t won (expletive),” MacKinnon said after a 6-3 loss in Game 6 at Vegas. “This year, I thought we were the best team in the league. For whatever reason, couldn’t get it together.

"I’m sure in training camp next year we'll figure it out, dissect things and come back better.”

The regular season couldn't have gone much better for the Avalanche. They captured their third Presidents' Trophy since relocating to Denver (they actually tied with Vegas for the most points but earned the top spot — and home-ice advantage — on a tiebreaker). They also had three players up for major awards in MacKinnon (MVP), Cale Makar (top defenseman), Philipp Grubauer (top goaltender).

This team was rolling along.

Then, it all felt apart as Colorado lost four straight to Vegas, including a rare home loss in overtime during Game 5 after squandering a two-goal lead.

It was the first time all season the team dropped four in a row.

“I’m the leader of the hockey team. If people want to come at somebody, it’s me," said Bednar, whose team endured two virus-related stoppages during the regular season. “I live by a model of extreme ownership, and I’m the one that’s running the team. I take responsibility.”

Bednar fully believes he can lead this team built by general manager Joe Sakic, a team based around speed and more speed that ran into a more physical Vegas squad.

“I like the way our team operated this year," Bednar said.

Colorado has quite a few players set to become free agents, including captain Gabriel Landeskog and Grubauer. Makar also is a restricted free agent.

Despite no fans until late in the season, Colorado finished 22-4-2 at home. That was tied with Pittsburgh for the most home wins in the league. Their .821 home points percentage was the highest since the team relocated to Denver.

MacKinnon notched two assists in his 50th career playoff game Thursday. His 69 points (28 goals, 41 assists) are tied for the fifth-most by a player in his opening 50 career postseason games. He’s in good company with names like Wayne Gretzky (104 points), Mario Lemieux (101), Jari Kurri (71) and Sakic (70) just ahead of him.

The 25-year-old MacKinnon is up for the Hart Memorial Trophy, which goes to the “to the player adjudged to be the most valuable to his team."

Defenseman Erik Johnson (upper body) was among the numerous injuries Colorado dealt with during the season. Johnson was limited to four games.

In addition, the Avalanche went through two different virus-related stoppages during the season, along with losing 11 players to COVID-19 protocols.

They also had forward Nazem Kadri suspended for eight games following an illegal hit in Game 2 of the Blues series. He would have been eligible to return in Game 7 against Vegas.