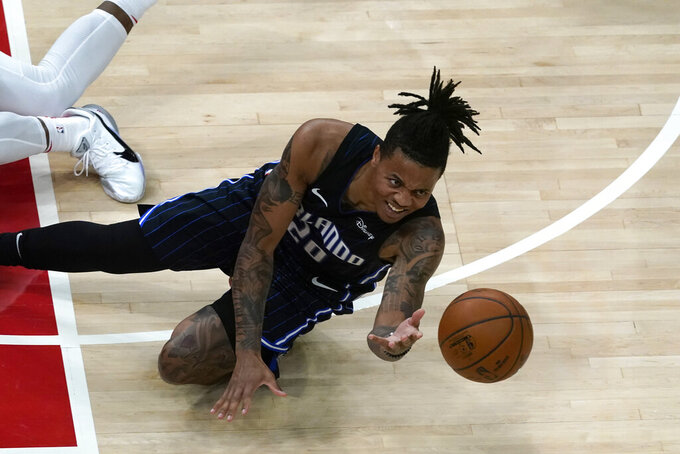 Orlando Magic guard Markelle Fultz (20) passes as he falls to the court during the second half of an NBA basketball game against the Atlanta Hawks, Sunday, Dec. 13, 2020, in Atlanta. (AP Photo/John Bazemore)

Steve Clifford is a veteran NBA coach, a brilliant tactician, someone probably who knows every nuance of every set that has ever been drawn up in league history.

Yet when he tries to determine where the Orlando Magic need to get better, it’s as easy as looking at the numbers.

“Balanced play wins in this league and if you look at last year, I think we ended up 23rd in offense and I think 12th in defense,” Clifford said. “We need to get back to being a top-10 defensive team and we’ve got to find ways to get to the top 15 on offense. And I think there are ways.”

He believes it starts with continuity.

The five players that the Magic had on the floor most last season — Evan Fournier, Aaron Gordon, Nikola Vucevic, Markelle Fultz and Terrence Ross — are all back. That’s a big key, Clifford said, because it means he’s got a core that knows what worked and what didn’t a year ago.

“To be honest, as you guys know we had stretches last year where we’re really good on defense and then we had stretches where we’re really good on offense — but what we didn’t do consistently was when we scored our defense wasn’t as good and when we defended we didn’t score as well,” Clifford said. “So, I think that getting to balanced play more consistently is the key for any NBA team.

There were additions. Clifford got reunited with Dwayne Bacon, a player who did well under him in Charlotte as a rookie. They drafted Cole Anthony, who the Magic were very high on during the evaluation process.

But the returnees will obviously have to lead.

“We have a lot of the same guys back,” Gordon said. “I think that continuity is going to be key for us, and it’s only going to get better.”

Some other things to know about the Magic going into the season:

The Magic were only 16-15 in their building last season (excluding the games played in the bubble), though could get a boost this season by perhaps having more fans at games than just about any other team in the league. Orlando has a plan to have as many as 4,000 socially distanced fans at home games; the Magic hope to be at that point by early January. Most teams are planning on going into the season without fans in their arenas because of the pandemic.

Only three teams — Minnesota, Golden State and Charlotte, teams that went a combined 57-137 last season — shot worse a year ago than the Magic. Orlando connected on just 44% of its shots from the field and 34% from 3-point range (that figure being 25th-best in the NBA). If this is going to be the year where the Magic make the leap and win a playoff series for the first time since going to the NBA Finals in 2010, they’ll have to shoot better than 44%. The way Clifford’s teams play defense, good shooting means wins; the Magic were 26-4 last season when outshooting opponents, 7-36 when not.

Vucevic remains Orlando’s best and most-important player. An All-Star two years ago, Vucevic’s numbers were stellar again last season — 19.6 points and 10.9 rebounds per game — and he continued making strides in his 3-point volume. He made 30 3’s in his first six seasons combined; he’s made 246 in the three seasons since, including a career-best 98 last season.

The Magic started 2-6 and 7-11 last season and were over the .500 mark only once — at 1-0. This year’s schedule doesn’t exactly seem easy to begin; Orlando plays 11 of its first 17 on the road and has Miami, Milwaukee and Philadelphia visiting for three of the six home games in that span. Getting off to a good start won’t be easy, but the Magic learned last season that trudging uphill in the standings only adds to the grind of a season.

Orlando had players miss a combined 180 games with illness and injury last season. This season isn’t off to the best start on those fronts; center Mo Bamba is out as he continues recovering from a bout with COVID-19 that started in the late spring, and Jonathan Isaac is expected to miss the entire season after surgery to rebuild his left knee after he got hurt in the bubble.