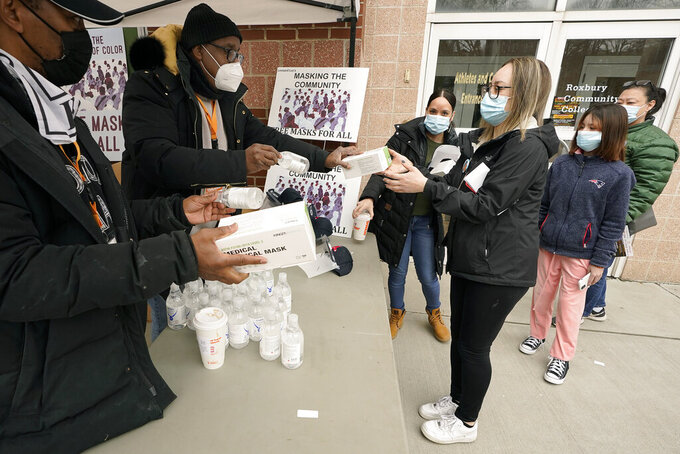 Volunteers Robert Lewis, left, and Leonard Lee, second from left, distribute masks and sanitizer to people who have received a COVID-19 inoculation at a vaccination site at the Reggie Lewis Center, in Boston, Sunday, Feb. 28, 2021. (AP Photo/Steven Senne)

PORTLAND, Maine (AP) — A congressman from Maine who cast one of two Democratic votes against the $1.9 trillion pandemic relief bill said the proposal contained too much unnecessary spending.

Rep. Jared Golden, who represents Maine's vast, mostly rural and politically mixed 2nd Congressional District, said he “won’t support trillions more in funding that is poorly targeted or in many cases not necessary at this moment in time.” The proposal, which had strong support from Democratic President Joe Biden, passed the U.S. House of Representatives on Saturday.

The only other Democrat to vote against the proposal was Rep. Kurt Schrader of Oregon. The proposal passed along party lines by a fairly thin margin.

Golden said he supported portions of the bill that focus on key recovery projects such as vaccine distribution and emergency federal unemployment assistance.

“This bill addresses urgent needs, and then buries them under a mountain of unnecessary or untimely spending,” Golden said.

The aid bill's next test is in the U.S. Senate.

Health officials in Connecticut are expecting an avalanche of requests for appointments as the state on Monday opens up COVID-19 vaccines to everyone 55 and over as well as school teachers and other school staff.

Acting Department of Public Health Commissioner Dr. Deidre Gifford said in a statement Sunday that though the state has increased capacity to accommodate online and telephone requests, delays are likely.

Connecticut has more than 500,000 people aged 55 and over and 160,000 educators and childcare workers. The state is getting about 130,000 vaccine doses per week from the federal government.

The latest average positivity rate in Connecticut is 3.38%. State health departments are calculating positivity rate differently across the country, but for Connecticut the AP calculates the rate by dividing new cases by test specimens using data from The COVID Tracking Project.

The seven-day rolling average of the positivity rate in Connecticut did not increase over the past two weeks, going from 3.46% on Feb. 13 to 3.38% on Feb. 27.

The number of cities and towns in Massachusetts that the state has designated as among the highest risk for COVID-19 transmission continues to fall.

The Massachusetts Department of Public Health said 28 municipalities were in the state's “red” category for COVID-19 risk as of late February. More than 100 communities were in the highest risk category two weeks ago.

The communities that remain at highest risk are scattered around the state. They include small towns such as Acushnet and Rutland and cities such as Chicopee and Fall River. Boston is listed in the “yellow,” or moderate, category.

“The public health risk reduction measures remain the same. Individuals must continue to wear masks or face coverings while out in public, maintain 6-foot social distancing, stay home when you are sick, and get tested if you have symptoms or are identified as a close contact,” the department said in a statement.

The Reggie Lewis Track and Athletic Center has been turned into a mass vaccination site with a hope of reaching communities of color in Boston.

The site, which is owned by Roxbury Community College, was slated to serve hundreds of people over the course of the weekend. College president Valerie Roberson said in a statement it's “crucial to have a mass vaccination center that is accessible via public transportation in a location that is familiar and comfortable.”

Another event canceled by the coronavirus pandemic is the annual Maple Open House Weekend in Vermont.

The event, in which maple syrup makers in the country’s top maple producing state open their sugar houses to the public, has been canceled for a second year in the row. A similar event in Maine was canceled last year but is slated to go forward in late March this time.

“It’s kind of a bummer, but probably the right decision,” Jenna Baird who runs the retail portion of Baird Farm told the Rutland Herald.

“We usually do it both days … and we estimated around 700 people in two days, so it’s grown to be quite the event on our farm,” Baird said. “Everyone does it a little bit differently, but we try to promote it a lot. We do free rosemary waffles, we do free tours all day — stuff like that.”

The decision to cancel the event for a second year came after talking to members who said they weren’t comfortable participating because of the pandemic, said Cory Ayotte, communications director for the Vermont Maple Sugar Makers Association.

Many producers reported an increase in online maple sales early in the pandemic, she said.

Democratic Rep. Annie Kuster said the authorization of a third COVID-19 vaccine has the potential to be a “game changer” for the state and the nation.

Kuster said the news came the same week as COVID-19 hospitalizations in New Hampshire fell below 100 for the first time since November.

“There is light at the end of the tunnel and by working together, relying on science, and following the guidance of public health officials we will have brighter days ahead,” Kuster said.

The Rhode Island Department of Health said the number of new cases in the state trended downward over the past week.

The health department also said more than 71,000 Rhode Islanders are now fully vaccinated against the virus.