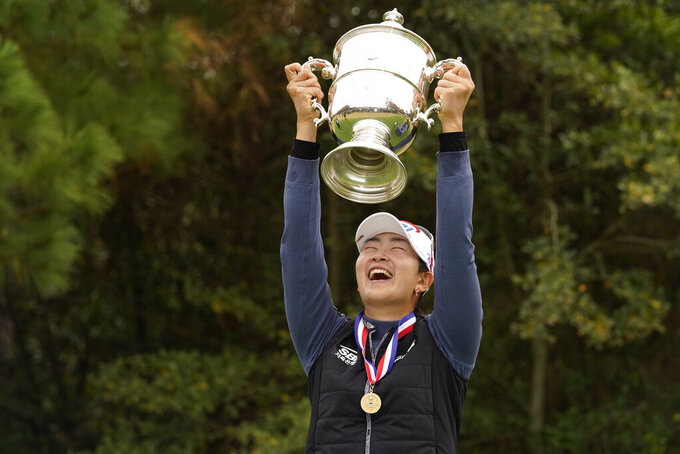 Sophia Popov not playing the ANA Inspiration after her Women’s British Open victory was understandable. The ANA Inspiration was postponed until September because of the pandemic and, just like the Masters, decided to leave the field as if it were played the first week in April.

More curious is Popov, one of the more celebrated stories in women’s golf this year, not playing this week in the CME Group Tour Championship.

By the book, she didn’t qualify. The LPGA Tour only awards Race to CME Globe points to members, and Popov wasn’t eligible to be a full member until after her victory at Royal Troon.

Because of the pandemic-shortened season, the LPGA increased the field from the top 60 to the top 70 in points, along with awarding CME two sponsor exemptions. Popov played in seven tournaments that counted after winning her first major and finished at No. 82.

The title sponsor decided to give the two free spots to Sarah Jane Kemp and Natalie Gulbis. Kemp, who is at No. 100 on the Race to CME Globe, has an endorsement deal with CME. Gulbis has made one cut in 33 events over the last five years.

Terry Duffy, the chairman and CEO of CME Group, told Golfweek he wanted the two exemptions for his corporate ambassadors, Kemp and Cheyenne Knight, who wound up getting into the field on her own. He said wanted Gulbis because he has known her since 2005 and she was instrumental in CME deciding to be an LPGA title sponsor.

Sponsor exemptions are the right of the company footing the bill — a big bill, in this case — though it's rare when a player left out is a reigning major champion.

Until Monday, the Tour Championship didn’t have the No. 1 player in the world. Jin Young Ko stayed in South Korea during the pandemic to be with her family, and the U.S. Women’s Open was her third event of the year. She tied for second to move into the top 70.

Popov will have to watch from home, which in this case is in Naples, Florida, where the Tour Championship is played.

“It was a great year for me,” Popov said on the eve of the Women’s Open. “And it’s something that I would have loved to play CME just because it’s Naples, it’s my hometown, and every year I’ve been there watching the girls and watching my friends. I felt like this year I definitely deserved to be there, and I’m still not in.”

CME is a strong supporter of the LPGA Tour, offering the biggest paycheck ($1.1 million) of the year. But this decision to leave out one of the four major champions is likely to raise eyebrows during what should be a week of celebration.

The new year brings a new morning program on Golf Channel with a new face and an old name.

“Golf Today” debuts on Jan. 4 as a live, daily program that effectively takes over for “Morning Drive” as the network moves to its new headquarters in Stamford, Connecticut.

Shane Bacon, who worked for Fox Sports when it had the USGA contract, is joining Golf Channel on the “Golf Today” show with fellow hosts Damon Hack, Jimmy Roberts and Anna Whiteley. Bacon also will be part of “Golf Central Live From” coverage and contribute play-by-play and reporting during certain tournaments.

The title of the new show takes Golf Channel to its earliest days. “Golf Today” was the name of the original pre-tournament show when the channel launched in 1995. As for “Morning Drive,” that starts to wind down this week after being a weekday show for the better part of a decade.

“At midday, we can lead the daily golf conversation with access to newsmakers in all time zones, tour players on the range preparing for upcoming tournaments and live press conferences,” Solomon said. “We’re also thrilled to welcome Shane Bacon as a co-host of ‘Golf Today.’ Shane has developed an avid fan base with his fresh and insightful approach across his work on golf broadcasts, social media and podcasts.”

“Golf Central” will continue to be shown in its evening time slot, along with pre- and post-tournament windows, with episodes re-airing on weekday mornings.

Tom Weiskopf has begun his battle with pancreatic cancer. The former British Open champion and esteemed golf course architect told Golfweek that he experienced sharp pain in his stomach while walking Troon Country Club in Arizona with members during a course re-opening.

He had his first round of chemotherapy last week.

“I’ve got a rough four to six months ahead of me” Weiskopf told Golfweek.

He said the diagnosis was “quite a blow” but that he remained in good spirits and has talked to a group of friends that includes Jack Nicklaus, Tony Jacklin, Andy North, Ed Sneed and Lanny Wadkins.

The European Tour announced a 2021 schedule of at least 42 events in 24 countries, with a reduction in Rolex Series events. Those that remain in the lucrative series will have increased prize money.

Some tournaments have not been confirmed, others have been moved around and the tour is keeping part of a “UK Swing” that was effective in creating a bubble environment during the restart from the COVID-19 pandemic.

The Rolex Series events will be the Abu Dhabi HSBC Championship (Justin Thomas is among those playing), the Aberdeen Standard Investments Scottish Open, the BMW PGA Championship and the season-ending DP World Tour Championship in Dubai. Prize money will increase by $1 million to $8 million, with Dubai going to $9 million.

Also key to the schedule are 18 events returning in 2021 that were either canceled or postponed this year.

Among the new events are the Tenerife Open and Gran Canaria Open right after the Masters. They will be followed by the Portugal Masters to create an Iberian Swing.

Tim Rosaforte will receive the 2021 Memorial Golf Journalism Award next year at Muirfield Village for his more than four decades as a writer and broadcaster. Rosaforte retired last year with health issues and recently was diagnosed with early onset of Alzheimer’s disease.

Rosaforte will be honored June 2 at Muirfield Village with Jim Nantz of CBS, the 2020 honoree. There was no ceremony this year because of the pandemic. Tournament host Jack Nicklaus called Rosaforte with the news.

“Tim has been a great friend for some 40 years,” Nicklaus said. “Tim is also one of this generation’s great golf journalists. He has developed relationships and trust from so many in the game, and you always knew that if there was an important story to be told in golf, Tim was going to be the first call you received and usually the first one to report it.”

Rosaforte received the PGA of America Lifetime Achievement Award in Journalism in 2014 and recently became the first journalist awarded honorary membership in the PGA.

HSBC has renewed golf partnerships to continue with the HSBC Champions, a World Golf Championships event in Shanghai, and the HSBC Women's World Championship in Singapore on the LPGA Tour. Both events were canceled this year because of the pandemic. ... Sami Valimaki is the first player from Finaland to win the Sir Henry Cotton Award as the European Tour's rookie of the year. ... Inbee Park's 68 in the final round at Champions Golf Club was her 24th subpar round in the U.S. Women's Open, tying Beth Daniel and Betsy King for the career record. ... For the first time since 2009, the LPGA produced first-time winners in all the majors.

A Lim Kim is the third woman since 2014 to win in her major championship debut, joining Hyo Joo Kim in the 2014 Evian Championship and Hinako Shibuno in the 2019 Women's British Open.

“The motivation's never changed, really. I get to get up each day and do the job I love. I've always wanted to be a golfer, and I don't want it to end.” — Lee Westwood after becoming No. 1 on the European Tour for the third time.