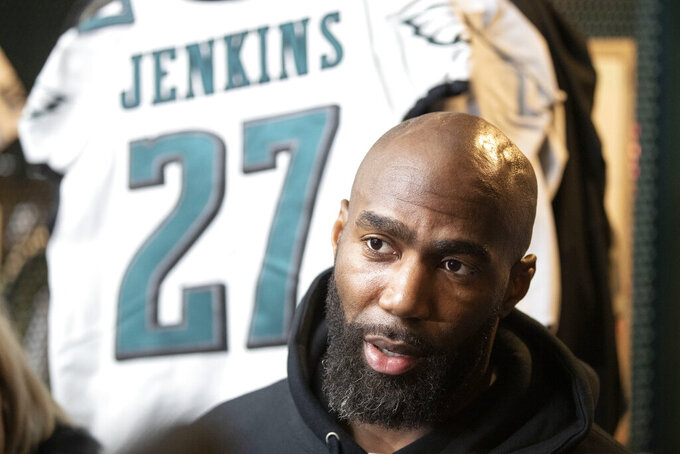 FILE - In this Jan. 6, 2020, file photo, Philadelphia Eagles strong safety Malcolm Jenkins speaks with members of the media at the NFL football team's practice facility in Philadelphia. The three-time Pro Bowl safety and two-time Super Bowl champion has been on the front lines fighting for social justice and racial equality for years. The latest plans are for the Malcolm Jenkins Foundation to expand its free digital curriculum, Power Pathway Academy. (AP Photo/Matt Rourke, File)

Malcolm Jenkins is determined to walk his talk.

The three-time Pro Bowl safety and two-time Super Bowl champion has been on the front lines fighting for social justice and racial equality for years. He backs it up with action.

The latest plans are for the Malcolm Jenkins Foundation to expand its free digital curriculum, Power Pathway Academy. The e-curriculum program offers students exposure to a wide variety of potential careers for both college-bound and non-college bound students such as filmmaking, design, digital marketing, coding, advertising, music, apparel and more through an innovative micro-learning platform designed to engage youth on their devices through culturally relevant learning experiences.

“How do we effectuate change for more kids? How do we get more exposure and more people into our programs?” Jenkins said Wednesday in a wide-ranging interview with The Associated Press. “One of the ways that we wanted to do that was expand our programming onto a digital platform, a virtual experience that we could share with kids from anywhere, and not just the kids that were physically in our programs.”

Jenkins said he didn’t feel many schools adequately equip students, particularly those in underserved communities, with the knowledge or employability skills required for navigating toward high-demand jobs in a competitive and digital work force.

The coronavirus pandemic made the problem “exponentially worse” so Jenkins’ foundation is fast-tracking implementation of the program.

“We’re creating a curriculum that will teach kids how to become proficient in these digital tools, whether they’re going to college or whether they’re just going right into the work force, but also being able to tell stories of different people who’ve taken different career paths and made it work for themselves in this context and even myself,” Jenkins said. “I started a clothing company. I never went to fashion school, never went to business school. And so teaching kids that they can become entrepreneurs, they can find lanes for themselves outside of the traditional norms, because now nothing’s traditional in this new kind of COVID normal.

"We still need support, corporate sponsors to really help us provide opportunities not only for the kids in Philly, which is where this started off, but we really want to scale it on a national level. ”

Jenkins, the co-founder of the Players Coalition, has been working to do more than protest against police brutality and racism. He’s involved in various initiatives that impact systemic, social and civic change in the areas of police and community relations, criminal justice reform and education and economic advancement in low-income communities.

Jenkins and others players have enlisted the NFL’s help in providing funding to help their causes. More players are following his lead.

“If you’re an athlete anywhere on any level from youth leagues all the way to professional (sports), I think you can look around and see plenty of examples that will show you how much impact athletes can have when it comes to social change and bringing up social dialogue,” Jenkins said. “For a long time, I felt like one of the few who kind of tried to lift up this mantle. But now I’m very, very encouraged because you see this groundswell of athletes across different sports, across different disciplines, really stepping up to the table, organizing and really using their platforms in ways that I don’t think we’ve ever seen in this country, at least on this scale. And so it’s very, very motivating to know that there there is so much energy around guys educating themselves about what’s happening, but also pushing that education into forms of action.”

Jenkins has plenty on his plate as an activist, a businessman and one of the best football players at his position. He also joined CNN this summer as a contributor focusing on racial and social justice and his Listen Up Media company is producing a documentary series on the history of Black wealth in America. Jenkins became the first African-American professional athlete to be named a visiting fellow at Harvard University’s Weatherhead Initiative on Global History.

Football remains his passion, even at age 32 and entering his 12th season in the league.

“I love giving back to the community and all of these other things,” he said. “But football is still a game that I love. And it’s really where I find my peace.”

Jenkins is back with the New Orleans Saints, the team that drafted him in 2009, after spending the past six seasons with the Philadelphia Eagles. He became a team leader and fan favorite in Philadelphia, helping the Eagles win the franchise’s first Super Bowl following the 2017 season.

His departure paves the way for Carson Wentz to assume the primary leadership role on the team.

“He’s starting to come into his voice and I think with the exodus of leaders like myself and a couple other guys, it’s going to be interesting to see him now take that bigger role,” Jenkins said. “I think it’s going to be his time to really make it his team and he’s still surrounded by other good leaders as well, Rodney McLeod being one of them who I know will kind of step up to that mantle. But, it’s no doubt about it this is Carson Wentz's team, and I think he’s ready, poised because he’s been able to really sit back and watch for (four) years now.”

Jenkins is hopeful the NFL will play its season despite concerns amid the coronavirus pandemic.

“It’s definitely not going to be 100% safe," he said, “but I think we’ve done our best to really put in as many protocols and listen to the health and safety experts as we’ve tried to roll out our plan.”