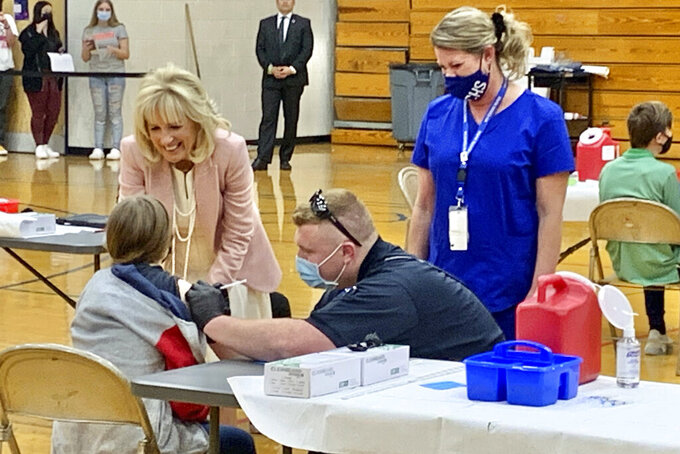 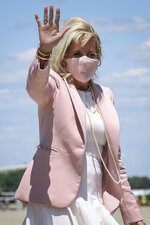 Manchin, with newfound clout in a Democratic Senate majority, is considered a crucial vote on the president’s families and jobs proposals. That includes massive infrastructure investment, as well as Democrats’ sweeping election and voter-access legislation.

Manchin said his Monday meeting with the president at the White House on the infrastructure proposal was productive, but he has expressed concerns about the $2.3 trillion price tag.

“The president and I had a very, very good meeting,” Manchin said Thursday. “We’re going to find a bipartisan pathway forward. We have to.”

Manchin has said measures to help coal miners in West Virginia and other rural states must be part of the package.

The first lady opened her brief remarks at a coronavirus vaccination clinic by saying Manchin’s “integrity and commitment to this state is steadfast.”

Jill Biden and Manchin were joined at the clinic at a Charleston high school by actress Jennifer Garner, a native of that city. They watched residents get their shots in a state that started strong in December and January but has since lagged behind other parts of the country.

This week, Pfizer’s vaccine won authorization for 12- to 15-year-olds, in a move that could make it easier to reopen the nation’s schools. And Thursday, the federal Centers for Disease Control and Prevention eased indoor mask-wearing guidance for fully vaccinated people, allowing them to stop wearing masks outdoors in crowds and inside in most situations.

Jill Biden said she found out about the CDC’s no-mask announcement as she was getting off the plane in West Virginia.

“And here I was going to buy one that was coordinated with my outfit,” she said, smiling.

Manchin, a former governor, chairs the Senate committee on energy and natural resources. He is also a member of committees on appropriations, armed services and veterans’ affairs.

Jill Biden is a longtime teacher. Manchin’s wife of 54 years, Gayle, is a former president of the West Virginia Board of Education and former state Secretary for Education and the Arts.

Last month the U.S. Senate confirmed Gayle Manchin to be the co-chair of the Appalachian Regional Commission. She was nominated by President Biden to the post in the federal-state partnership that promotes economic development across West Virginia and parts of 12 other states in Appalachia.