With ‘Mank’ and ‘The Crown,’ Netflix dominates Globes noms 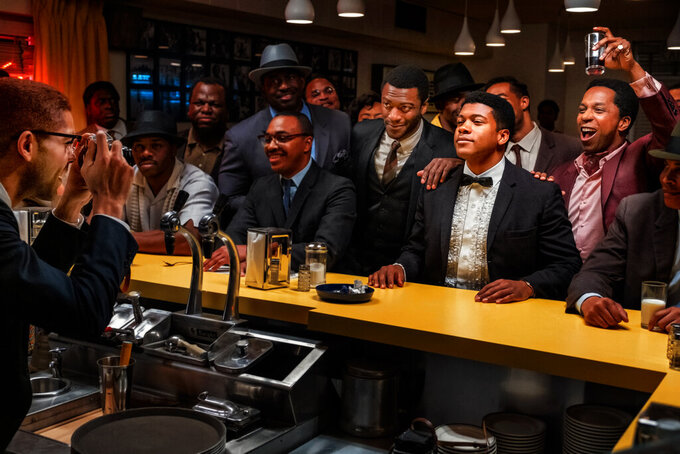 This image released by Amazon Studios shows, from right, Leslie Odom Jr., Eli Goree and Aldis Hodge in a scene from "One Night in Miami." (Patti Perret/Amazon Studios via AP)

The Globes, delayed about two months due to the coronavirus, tried to muster some of the awards' usual buzz on Wednesday in a largely virtual awards season bereft the kind of red-carpet glamour the Globes annually feast on. And perhaps to account for the otherwise lack of it, the Hollywood Foreign Press Association heaped nominations on two lavish period pieces rich in royalty — both the Hollywood variety (the black-and-white "Mank" dramatizes the making of “Citizen Kane”) and the British kind.

“Sometimes you just have to think, what does it mean in the whole big scheme of things with this worldwide, global thing going on," Oldman said from London. “But you know, we want to kind of get back to some kind of normalcy. Life goes on."

Netflix, which topped all studios at the Globes last year, too, led with a commanding 42 nominations, with 22 coming in film categories and 20 in television. No other studio was close.

The day belonged to the streaming services. Disney+ (“The Mandalorian”) and HBO Max (“The Flight Attendant”) both notched their first Golden Globe nominations. Amazon, with Regina King's “One Night in Miami,” about a meeting of four Black icons in 1964, and Steve McQueen's film anthology “Small Axe,” landed 10 total nominations — a total matched by the Disney-owned Hulu, including nods for the Catherine the Great series "The Great," with Elle Fanning, and the Andy Samberg time-warp comedy “Palm Springs.” Apple TV+, too, scored several nods including the Jason Sudeikis series “Ted Lasso,” the Irish animated film “Wolfwalkers” and Bill Murray's performance in Sophia Coppola's father-daughter comedy “On the Rocks.”

“The Crown” landed six nominations including best series, drama, and acting nods for Olivia Colman and Josh O’Connor. The final season of “Schitt’s Creek” trailed with five nominations, while Netflix’s “Ozark” (four nods) and “The Queen’s Gambit” (two nods) also added to the streamer’s totals. ("Queens Gambit" star Anya Taylor-Joy was nominated for both the hit show and for the Jane Austen adaptation “Emma.”)

Aaron Sorkin’s “The Trial of the Chicago 7” — also a Netflix release, about the countercultural clash and subsequent trial following the 1968 Democratic National Convention — came in second among movies with five nominations, including nods for best film, drama; best director and best screenplay for Sorkin; supporting actor for Sacha Baron Cohen; and best song.

“On the one hand, it is strange to be celebrating when so many people are suffering but on the other hand, at least for movie lovers, the Golden Globes are a fun thing,” said Sorkin by phone. “It’ll be a weird ceremony this year. ... Who knows what it’s going to look like.”

Netflix doesn't report box office figures and both “Nomadland” and “The Father” are yet to open beyond a qualifying run in theaters. So the category's total box office — a historic low of about $265,000 — is due entirely to “Promising Young Woman," Fennell's acclaimed #MeToo revenge drama.

“It’s an opportunity to shine a light on some smaller movies,” said Riz Ahmed, nominated for his performance as a heavy metal drummer losing his hearing in “Sound of Metal.” “You can always find the opportunity in the obstacle.”

“I'm very proud and I love their movies,” said Zhao by Zoom on Wednesday, referring to King and Fennell's films. “It's a really exciting time.”

By splitting up films between drama and comedy or musical, the Globes gave a boost to an awards season wildcard, “Borat Subsequent Moviefilm.” Baron Cohen's “Borat” sequel — one of the few nominees partially shot during the pandemic — was nominated for best picture, comedy or musical, best actor in a comedy for Baron Cohen and best supporting actress for Maria Bakalova.

Celebrating the nominations for both “Borat” and “The Trial of the Chicago 7,” Baron Cohen said in a statement: “These two films are different, but they share a common theme—sometimes we have to protest injustice with our own farce.”

Should neither win, he said, “I promise to hire Rudy Giuliani to contest the results.”

Also nominated for best picture in the comedy or musical category were: “Palm Springs,” “The Prom," “Music” and “Hamilton.” The film version of Lin-Manuel Miranda's Broadway musical isn't eligible for the Academy Awards but was for the Globes, which also nominated Miranda's performance.

Gauging the awards prospects of most films has been difficult this winter, with none of the usual screenings and events happening in-person, and a number of the films once expected to be lead contenders postponed. But there were still plenty of choices by the press association — an always unpredictable group of 89 voting members — that nevertheless surprised observers Wednesday.

Spike Lee, whose daughter Satchel and son Jackson are Globes ambassadors this year, saw his Vietnam veteran drama “Da 5 Bloods” unexpectedly shut out. Nominations for Jared Leto's performance as a serial killer in the just-released “The Little Things” and for the Sia-directed musical “Music" were so far out of left field that they seemed likely to rank among previous wayward Globes nominees like “The Tourist."

The press association also drew much criticism for an earlier decision to consider Lee Isaac Chung’s lauded immigrant drama “Minari," about a Korean-American family in Arkansas in which the characters largely speak Korean, ineligible for its top award. The group instead nominated “Minari” for best foreign language film.

The nominations announcement was also scaled down due to the pandemic. Presenters Sarah Jessica Parker and Taraji P. Henson read nominees not from a teleprompter but holding print-outs and streaming live from what appeared to be their homes.

The Globes are typically the first major show of Hollywood’s awards season, which ends with the crowning of the best picture winner at the Oscars. They’ll retain that distinction, despite being delayed nearly two months and opting for a bi-coastal ceremony to be hosted by Tina Fey from New York and Amy Poehler from Beverly Hills, Calif. The Oscars are set for April 25.