Many African, Asian families marry off daughters amid virus 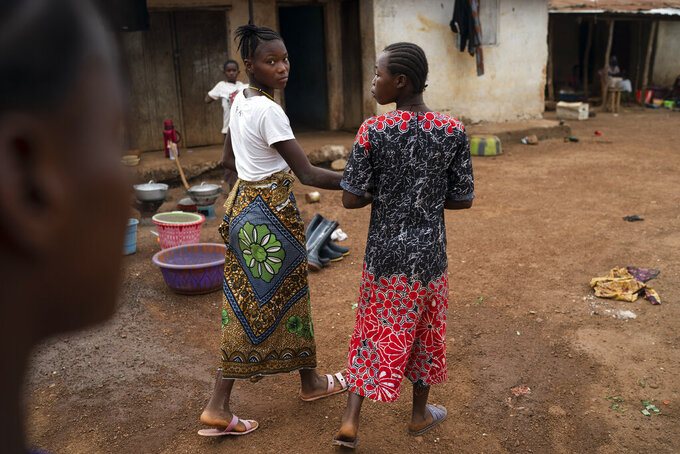 Marie walks with a friend on a street in Komao village, on the outskirts of Koidu, district of Kono, Sierra Leone, Sunday, Nov. 22, 2020. A man, in his mid-20s, first caught a glimpse of Marie as she ran with her friends past his house near the village primary school. Soon after, he proposed to the fifth-grader. “I’m going to school now. I don’t want to get married and stay in the house,” she told him. But the pressures of a global pandemic on this remote corner of Sierra Leone were greater than the wishes of a schoolgirl. (AP Photo/Leo Correa)

KOIDU, Sierra Leone (AP) — The man first caught a glimpse of Marie Kamara as she ran with her friends past his house near the village primary school. Soon after, he proposed to the fifth-grader.

“I’m going to school now. I don’t want to get married and stay in the house,” she told him.

But the pressures of a pandemic on this remote corner of Sierra Leone were greater than the wishes of a schoolgirl. Nearby mining operations had slowed with the global economy. Business fell off at her stepfather’s tailoring shop. The family needed money.

Her suitor was a poor miner in his mid-20s, but his parents could provide rice for Marie’s four sisters and access to a watering hole. They could pay cash.

Before long, Marie was seated on a floor mat in a new dress as his family presented hers with 500,000 leones ($50) inside a calabash bowl along with the traditional kola nut.

“The day they paid for me was on a Friday and then I went to his house to stay,” she says flatly, adding that at least now she will eat twice a day.

Many countries had made progress against traditional and transactional marriages of girls in recent decades, but COVID-19’s economic havoc has caused significant backsliding: The United Nations estimates that hardships resulting from COVID-19 will drive 13 million more girls to marry before the age of 18.

Though most such marriages take place in secret, Save the Children estimates that this year alone, nearly half a million more girls under 18 are at risk of being married off worldwide, most in Africa and Asia. One aid organization said staffers in a remote corner of Sierra Leone overheard a relative offering up a girl as young as 8 for marriage earlier this year. When chastised, the grandmother later denied doing so.

In most cases, needy parents receive a dowry for their daughter, such as a bit of land or livestock that can provide income, or cash and a promise to take over financial responsibility for the young bride. The girl, in turn, takes on the household chores of her husband’s family and often farm work.

This story was produced with the support of the Pulitzer Center on Crisis Reporting.

As the coronavirus spread quickly around the world, so too did financial hardship. India’s harsh lockdown to contain the virus in late March caused millions of impoverished migrants to lose their jobs. With schools closed and pressure on household finances mounting, marrying off young girls has become a more viable option for reducing expenses.

The ChildLine India counted 5,214 marriages in just four months of lockdown between March and June 2020 across India. This is a vast undercount, the organization says, as the majority of cases are not reported.

Intervention is only sometimes effective at preventing the marriages, even where they are illegal. Child protection authorities in Bangladesh said they received an 8:30 p.m. call back in June warning that a child marriage was to take place within the hour.

As soon as the officials arrived the groom and his family ran away. The family said they were desperate because the father was out of work due to the COVID-19 crisis, but promised not to go ahead with the wedding.

Then they simply waited for officials to leave and held the ceremony at two in the morning.

Since the pandemic started, though, most marriages don't even include a ceremony at the local mosque or church: Parents simply accept suitors’ proposals and then deliver their daughters to the groom’s home, traditional leaders say.

The willingness to sacrifice a daughter underscores the hard lives many young girls have in this part of Africa. They are largely seen as household help as children, sent out to gather firewood or water at sunrise, and often the last to eat at mealtime, until they are sent to join their husbands to perform the same chores and more.

Kadiatu Mansaray, now 15, can’t be sure just how much money was offered as a bride price to her widowed mother: She was crying too hard at the ceremony to see straight.

“I was not ready to get married. I wanted to learn something first,” she says.

The divorce came as swiftly as the marriage. A month after leaving her husband, Kadiatu’s left eye is still blackened from his last beating. Her offense, he said, was sharing their limited food with others.

On rare occasions, some teenagers manage to escape early marriage with the help of supportive relatives but that assistance is often temporary.

Naomi Mondeh was just 15 and had only finished the fifth grade when her parents said that they could no longer afford her schooling. A man from neighboring Liberia working in the timber trade offered the cash-strapped family a 50-kilogram bag of rice for her.

“They said: ‘Naomi, you know our situation now. We do not have anything. And there is a man who wants to marry you and help you,’” she recalled. “They told me that if I reject him, they would not take care of me anymore.”

Naomi didn’t know his age, or the fact he already had one wife. After marrying, her husband often would leave her alone with no money for food.

In November she managed to escape by motorcycle taxi to Koidu, the largest nearby town, where an aunt was willing to take her in. Her parents said she can stay for now while they try to work things out. Naomi is resolute, though, that she is done with her husband.

“There is nothing that will make me to return to him again because there will be more suffering for me," she said. "I will stand firm to not go back.”