Marathon man: Swimmer Mellouli looks ahead to Paris at 40 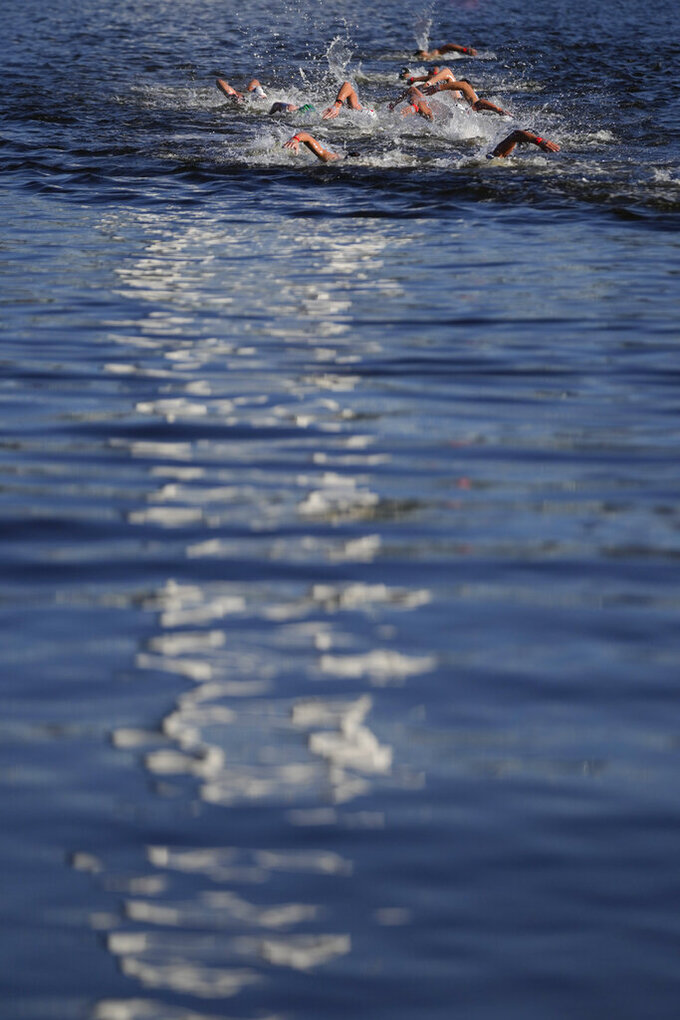 The Rainbow Bridge is reflected in the water as swimmers compete during the men's marathon swimming event at the 2020 Summer Olympics, Thursday, Aug. 5, 2021, in Tokyo, Japan. (AP Photo/Jae C. Hong)

TOKYO (AP) — After a rough run-up to his sixth Olympics, Ous Mellouli is already looking ahead.

Still fit and motivated at 37, the Tunisian swimmer would be 40 at the 2024 Paris Games.

Can he imagine competing against athletes half his age?

“I honestly hope so,” he said, still wet after finishing 20th in the men's 10-kilometer marathon swimming on Thursday.

Mellouli, the 10K Olympic champion in 2012, had his training muddled by a legal fight with the Tunisian swimming federation in the weeks leading up to Tokyo. Officials in his country have promised to resolve the dispute after the Games.

“A lot of extra stuff has been happening in my preparation that did not permit me to be in top form for the conditions,” he said. “I was hoping the situation would have been better.”

Mellouli was 12th in the early stages of the seven-lap race on a hot and humid morning in Tokyo Bay. But he dropped to 18th after Lap 4 and couldn't make up ground against a fast pace set by gold-medalist Florian Wellbrock of Germany.

Wellbrock won by 25.3 seconds, finishing in 1 hour, 48 minutes, 33.7 seconds. In three previous men’s marathon races, the largest margin of victory was 3.4 seconds by Mellouli at the 2012 London Games.

“A bit disappointing,'' he said. ”I thought I could have been more in the fight."

Mellouli began transitioning from pool swimming to open water competition after 2009. He earned a bronze medal in the 800-meter freestyle to go with his marathon gold in 2012. Four years later in Rio de Janeiro, he finished 12th in the 10K, his only event. He first competed in the 2000 Sydney Olympics at age 16. He lives in Los Angeles, where he graduated from the University of Southern California.

Mellouli leaves Tokyo with feelings of pride for 18-year-old teammate Ahmed Hafnaoui, who earned gold with a stunning victory in the 400-meter freestyle in the pool.

He joined Mellouli as the only Tunisians to win a gold in swimming. Mellouli won the 1,500 free at the 2008 Beijing Games, one of his three career Olympic medals.

“That was great for Tunisian swimming, for Arab swimming, for African swimming. I'm very proud of the kid,” Mellouli said. “The 400 free is a very tough event, I think my best finish was fifth. He's a very mature athlete at a young age.”