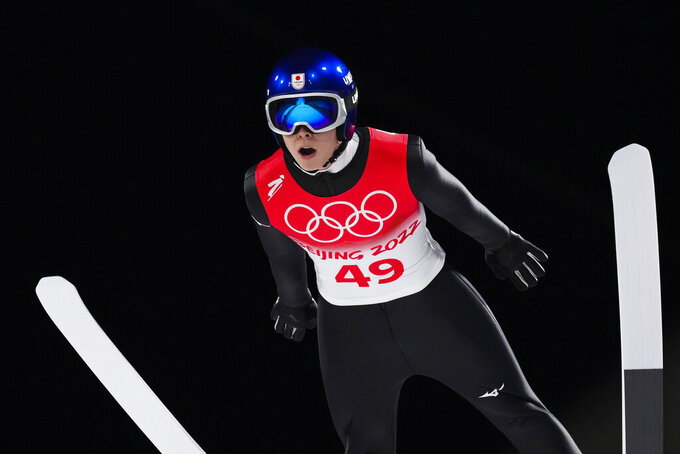 Ryoyu Kobayashi, of Japan, soars through the air during a men's large hill individual trial round for competition at the 2022 Winter Olympics, Saturday, Feb. 12, 2022, in Zhangjiakou, China. (AP Photo/Matthias Schrader)

“Kobayashi is really strong when he’s in the first position after the first round, so I just had to go for it," Lindvik said.

Lindvik did just that, jumping 140 meters (459 feet) on his final jump and earning 296.1 points overall to become the first Norwegian to win the event since Toralf Engan in 1964.

Kobayashi, who won gold on the normal hill on Sunday, earned silver after coming up short on the final jump.

“I was tense," Kobayashi said through an interpreter.

He wasn't the only one.

“It was a nervous moment when I had to watch Kobayaski," Lindvik said.

Kobayashi went into the final round with the lead after jumping 142 meters (466 feet) and earning 147 points. Lindvik trailed by only 2.2 points, then flew past him with nearly flawless style.

Karl Geiger of Germany, who is No. 1 in the World Cup rankings, finished third. The result pleasantly surprised Geiger after he finished 15th on the normal hill and said he struggled a lot in training on the large hill.

“It's really unbelievable what happened that I can achieve the bronze medal," he said. “Two days ago, I was I was hopeless in my mind."

Two-time defending champion Kamil Stoch of Poland was fourth, coming up short on his shot to become the first to win three straight Olympic titles on the large hill. The disappointment left him in tears.

“I'm really sad," Stoch said. “This is not exactly disappointment because I did everything I could. I had a feeling that I did really good, but obviously it was not enough."

Stoch was one of four previous medalists in the competition, along with 40-year-old Simon Ammann of Switzerland, Peter Prevc of Slovenia and Robert Johansson of Norway.

Prevc finished 10th and Ammann was 25th. Johansson, who won bronze on the normal and large hill at the 2018 Olympics, failed to advance to the 30-jumper final round and finished 32nd.

Like a lot sports at the Beijing Games, some of the best are unable to participate.

Men have been ski jumping at the Winter Olympics since the first edition in 1924 while women did not have access to the sport at the Olympics until 2014.

The men will be back on the large hill on Monday for a team competition. Norway, Germany and Austria have won the last three Olympic team events. The trio of traditional powers will likely contend for medals again, trying to hold off Slovenia and Japan.

Slovenia won gold on Monday in the first Olympic ski jumping mixed team competition, an event marred by five women being disqualified for having jumpsuits that were too large.

American jumpers Decker Dean, Casey Larson and Kevin Bickner advanced to the qualification round and Patrick Gasienica missed the cut Friday, a result he seemed to see coming as he slammed his skis into the snow walking away from the hill.

Bickner (39th), Larson (43rd) and Dean (45th) finished toward the bottom of the 50-jumper, first-round field Saturday, representing a country that has historically struggled in the sport.

“It’s not the most popular sport in America,” said Bickner, who grew up ski jumping in suburban Chicago at the Norge Ski Club. “I will say, though, that over the past few years we’ve seen some steady growth, which is really cool. I’m hopeful for the future of ski jumping in America.”