The Masters in November gives golf a big sendoff 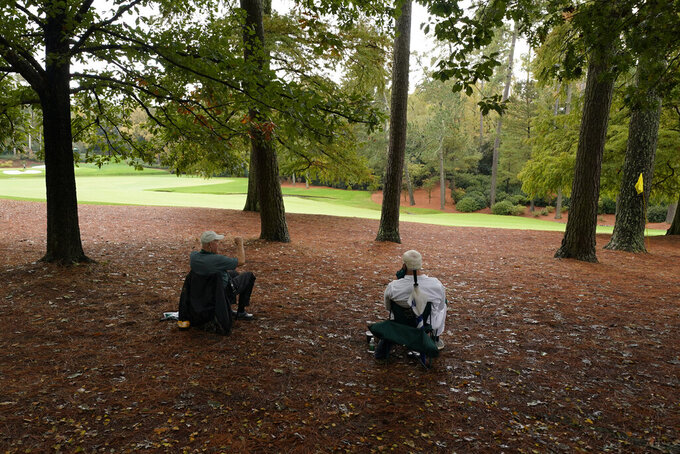 Course marshalls wait for golfers on the 13th hole during a practice round for the Masters golf tournament Wednesday, Nov. 11, 2020, in Augusta, Ga. (AP Photo/Charlie Riedel)

AUGUSTA, Ga. (AP) — Any optimism that the next Masters will be restored to its full glory of spring blooms and the endless chorus of cheers was dampened only by the reality of the calendar and the recent spikes in coronavirus cases.

It has been eight months since Augusta National said it was postponing the Masters because of the COVID-19 pandemic, and seven months since the club targeted two weeks before Thanksgiving as the most practical time to play this year.

“I'm hopeful that we will see improved conditions regarding this virus, but April is less than five months away, so there's no assurance of that," Masters Chairman Fred Ridley said. “But we do have hopes that the tournament in April will be closer to normal than it is right now.”

There is very little normal about the 84th Masters, starting with the opening tee shots from both the first and the 10th tees. That has never happened on a Thursday morning.

Abraham Ancer of Mexico, one of 26 newcomers to the Masters, was playing his final practice round on Wednesday at about the time he would have been taking part in the Par 3 Contest, which was canceled. The Par 3 is entertainment for the patrons, and there are no patrons this year.

On Tuesday, Jon Rahm skipped a tee shot across the pond, onto the 16th green, and watched it roll the length of the green, down the slope and into the cup. He raised his arms in celebration. There was video. And that was about it.

“Just imagine the roars that would have created in a normal year," Rory McIlroy said. “It's a different look. It's November, and I think everybody just has to embrace that we're here and we're playing and that's a great thing."

In some respects, this Masters is a celebration of what golf has done and a sendoff the sport has never had.

Except for World War II and the one time in 1971 when the PGA Championship moved to February in Florida, the Masters always has been the first major of the year. That rite of spring was about more than azaleas, dogwoods and the pursuit of a green jacket. For many, it signaled the start of golf season, whether that meant playing or watching.

“All the Masters I've watched over the years in Ireland, the golfing season started normally the weekend of the Masters,” British Open champion Shane Lowry said. “That's when everyone gets the clubs out of the garage and dusts off the cobwebs and gets out and starts playing. That's when the weather starts to go from 6 degrees to about 12 (low 40s to low 50s Fahrenheit). And it only rains a little bit rather than loads.”

The Masters already is the most popular of the majors because it's held on the same course each year and there's a magic about Augusta National that creates so much drama.

Is there a better way to end the year?

Sure, there are two more official PGA Tour events after the Masters. That's not unusual considering no other sport has a longer season than golf. But having a Masters in November reads like the final chapter.

McIlroy, Lowry and Tiger Woods are among the many players who will put their clubs back in the garage.

Golf, like so many other sports, needs a feel-good finish. The sport was shut down for three months on March 13. One of the majors, the British Open, was canceled. Golf resumed in June with a hectic schedule of only one week off — Thanksgiving — and no assurances of safe health for anyone in the traveling circus.

“I think when The Open Championship was canceled, I had serious doubts we'd play a Masters this year in 2020,” McIlroy said. “I think the R&A were in a tough situation, the fact that if they pushed it back, the daylight in the U.K. just isn't there to hold a field of 156. One of the nice things about the Masters is its limited field.”

Fifteen players on the PGA Tour have tested positive for the coronavirus, including Dustin Johnson, the No. 1 player in the world. One player had to miss the PGA Championship in August, two withdrew from the U.S. Open in September and two more — including former Masters champion Sergio Garcia — tested positive ahead of the Masters.

But golf played on. And now it's at the finish line with no gallery. Imagine the final turn onto Boylston Street in the Boston Marathon with no one lining the streets to cheer runners on.

The bigger issue might be the starting line. The final day of practice was halted midafternoon because of dangerous storms approaching and more rain expected for the opening round. The course already is slightly softer this time of the year, anyway, and it figures to play longer.

But they're playing. The anticipation is building. The course looks like it always does, except for the color of the leaves down at Amen Corner and the lack of blazing colors of flowers everywhere.

“They've done a great job of giving us a golf course that's similar to what we're used to, but obviously a few months earlier than when we normally are here," Webb Simpson said.

Earlier than next April. Later than last April. Whatever. It's the Masters, and it's here. And after Jack Nicklaus and Gary Player hit the honorary tee shots, starters on the first and 10th tee will introduce each player with that familiar phrase.