Masters plans for a limited number of spectators in April 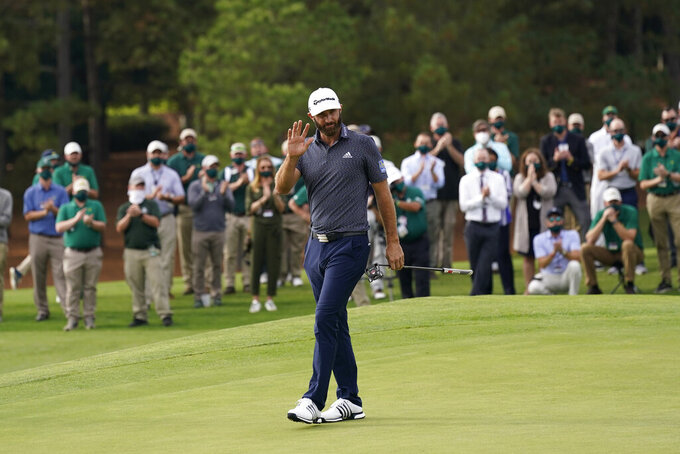 FILE - Dustin Johnson waves after winning the Masters golf tournament in Augusta, Ga., in a Sunday, Nov. 15, 2020, file photo. Some volume is returning to the Masters, just maybe not the head-turning roars. Augusta National Chairman Fred Ridley said Tuesday, Jan. 12, 2021, the club intends to allow a limited number of spectators for the Masters on April 8-11, provided it can be done safely, given the coronavirus pandemic. (AP Photo/David J. Phillip, File)

Some volume is returning to the Masters, just maybe not the head-turning roars.

Augusta National Chairman Fred Ridley said Tuesday the club intends to allow a limited number of spectators for the Masters on April 8-11, provided it can be done safely amid the COVID-19 pandemic.

In other areas, the Masters in April will be a lot like the last one in November. Ridley said it will be conducted with similar health and safety standards. Those standards included mandatory testing for the coronavirus and masks being worn to prevent its spread.

Ridley said holding the Masters with only essential personnel made the club confident in its ability to stage a major championship with limited fans.

“Nothing is, or will be, more important than the well-being of all involved,” Ridley said. “While we are disappointed that we will be unable to accommodate a full complement of patrons this year, we will continue our efforts to ensure that all who purchased tickets from Augusta National will have access in 2022, provided conditions improve.”

The Masters was played Nov. 12-15 — the first time in the autumn since it began in 1934 — because of the pandemic that forced golf to reconfigure its major championship season and led to the cancellation of the British Open.

Ridley did not indicate how many spectators will be allowed. The Masters does not publicize how many tickets it sells or how many people typically are on the grounds. It has been estimated at roughly 40,000, though it's far easier to judge the attendance in volume decibels.

The roars are a big part of what makes the Masters, and they were missing in November when Dustin Johnson set the scoring record at 20-under 268 to win by five shots for his first green jacket.

“From playing it in November with no fans — not that I didn't know this — but I didn't give enough credit to how much the fans and the whole atmosphere builds and makes the Masters,” Augusta native Charles Howell III said. “With that said, any fans we get brings us closer back to the Masters. And so I was really excited to hear that.”

The club is so confident that Ridley also said the Augusta National Women's Amateur, which was canceled last year after its debut in 2019, and the Drive, Chip and Putt National Finals, will be held with a small number of spectators.

Golf has been without a full house since the Arnold Palmer Invitational in Orlando, Florida, in March. The Players Championship the following week cut off attendance by midday of the opening round, and then the PGA Tour shut down for the next three months and returned without fans.

The Houston Open sold 2,000 tickets a day in November. The Sentry Tournament of Champions had about 200 people in an area near the 18th green.

But no tournament is more defined by noise than the Masters. Fans and players alike have said they can tell what's happening by the nature of the cheer, mainly because everyone knows the course so well.

Cameron Smith was runner-up to Johnson and played in the group ahead of him in the final round.

“I feel as though the atmosphere around there was obviously down this year,” said Smith, who has played the Masters four times. “It's such a unique place in that you can hear everything that's going on throughout the whole course. I think if we get a few out there, it will definitely make a difference.”

The Masters also is planning for limited media attendance to allow for proper distancing. Club members were allowed to attend with their spouses, though they were not required to wear their green jackets unless they were on a committee.

For the Augusta National Women's Amateur and the Drive, Chip and Putt Finals, limited patrons would be allowed, most likely family members.

“It’s a step in the right direction and I do think it is a positive,” Howell said. “And if the Masters feels like they can host fans, and host them safely, then they clearly think that we’re making progress on this.”