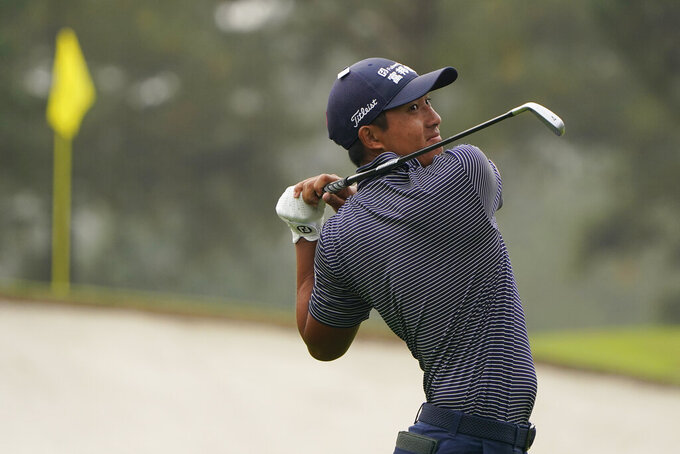 C.T. Pan, of Taipei, tees off on the third hole during the final round of the Masters golf tournament Sunday, Nov. 15, 2020, in Augusta, Ga. (AP Photo/Chris Carlson)

AUGUSTA, Ga. (AP) — Amateur Andy Ogletree was getting ready to tee off in the Masters for the first time when his playing partner, a fellow U.S. Amateur champion, came up to introduce himself.

Guy by the name of Tiger Woods.

“Before I teed off, he kind of came up and embraced me and said, ‘Let’s go do this thing,’” Ogletree said Sunday after shooting an even-par 72 tie for 34th and join Woods on the list of low amateurs at the Masters. “I think that’s one thing I’ll never forget.

“I was pretty nervous on the first hole. I didn’t really know what I was going to say to him,” Ogletree said. “He just came up -- smiling, laughing, whatever -- and that just kind of settled me down.”

A Mississippi native who played at Georgia Tech, about two hours away, Ogletree earned his invitation to Augusta National with a victory in the U.S. Amateur at Pinehurst in August, 2019. He had to wait an extra seven months when the coronavirus pandemic delayed the tournament from April to November, but it was worth the wait: For the first 36 holes he was paired with Woods, who won the Amateur three times and went to win 15 majors and 82 tournaments overall as a professional.

“Every player my age wants to play with Tiger and see what it’s all about,” said Ogletree, who won a silver bowl. “Obviously, he’s not as dominant as he used to be, but he’s still one of the greatest to ever play. And he still hits some shots that you’re like, ‘Wow, I get it now.’ So, it was awesome.”

John Augenstein was the only other amateur to make the cut. He qualified by finishing second to Ogletree at the U.S. Amateur, losing in the championship at Pinehurst 2 and 1. Augenstein opened with a 69 and was the low amateur after 36 holes at 3 under before shooting a pair of 75s over the weekend and dropping to 55th overall, tied with Phil Mickelson.

If they gave out an award for the best-finishing player from the PGA Tour Champions, 63-year-old Bernhard Langer would have collected the prize.

The two-time Masters winner from Germany shot a 1-under 71 in the final round to finish at 3-under 285 — the best score among three 50-and-older players who made the cut. Mike Weir (290) and Phil Mickelson (291) are 13 years younger and only became eligible for the PGA Tour Champions this year.

Langer also finished one stroke ahead of U.S. Open champion Bryson DeChambeau, who was the longest hitter in the tournament with an average of 324 yards per drive. Langer was last of the 60 who made the cut, averaging 260 yards.

“I felt right in the middle of it, in the thick of it,” said Langer, who played with DeChambeau in the final round. “I got to experience the longest guys in the world right now, and it’s quite amazing. Different game.”

Langer’s game is holding up just fine. He became the oldest player in Masters history to make the cut, beating the record set two decades ago by Tommy Aaron.

Langer might set another record or two before he’s done.

“You never know,” he said. “I know how to play this golf course and just have to play my angles and rely on my short game. With me it’s really all the putter. If I can make a few putts, I know I can shoot somewhere around par or even under, and that’s usually good enough to hang in there.”

SEE YOU NEXT YEAR

C.T. Pan will be back for more sandwiches next year.

The Masters rookie, who turned 29 on Thursday, earned an invitation back for 2021 by finishing at 10 under and in a tie for seventh. Pan thanked Augusta National for having him and had a special shoutout for the food.

“My wife and I, we just love all the dinners, all the sandwiches out here,” he said.

Asked which sandwich was his favorite, Pan said: “After long debates with my wife, I want to say egg salad sandwich. I’ve tried the pimento cheese, egg salad, the burger, the grouper sandwich, the fried chicken sandwich, all the sandwiches I could get. I tried them all.”

Fifty players in the field had already qualified for the next Masters, but everyone in the top 12 gets to return. That means Dylan Frittelli (-11, tied for fifth) and Corey Conners (-9, T10) can also come back in April -- if the pandemic allows.

“This is where you want to be every year,” said Conners, who was competing in his third Masters . “If you’re here, you’ve done a lot of really good things.”

Fritelli, who was appearing in his second Masters, had never finished in the top 10 of a major before.

“Obviously it’s a big step for me,” he said. “It’s my first time and first time making the cut here, as well. So lots of first time events that I’m proud of and something that I can build on now heading into next year.”

McIlroy finished in a tie for fifth with an 11-under 277 on Sunday — nine strokes behind winner Dustin Johnson, but still a nice recovery after opening opening with a 75. McIlroy went to the final round trailing Johnson by eight shots and shot 69.

“I guess I need to take the positives,” McIlroy said. “I played the last 54 really well and only made two bogeys in that 54-hole stretch, which is probably the best run of golf I’ve played here.”

It was McIlroy’s sixth top-10 finish in 12 appearances at the Masters, which remains the only major to elude him.

Back in 2011, he seemed poised to win his first major title at Augusta National, leading after each of the first three rounds before collapsing on the final day with an 80. Since then, he’s won the U.S. Open, the British Open, and the PGA Championship twice.

The closest McIlroy on Sunday was when a birdie at the eighth brought him within four strokes of Johnson.

“I thought, maybe there’s a chance,” McIlroy said. “But then the wind sort of got up as we hit the turn, and it just was hard to make birdies.”