Match Play field set with possibilities that remain for more 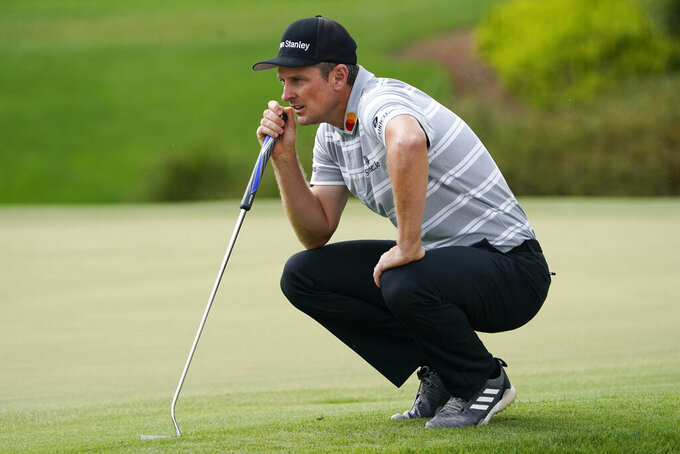 Justin Rose, of England, lines up a putt on the second green during the third round of the Arnold Palmer Invitational golf tournament Saturday, March 6, 2021, in Orlando, Fla. (AP Photo/John Raoux)

PONTE VEDRA BEACH, Fla. (AP) — The most recent world ranking determines the 64-man field for the Dell Technologies Match Play next week in Texas, and there remains much to be determined.

Three players made big moves on both sides of the Atlantic. First, Antoine Rozner made a 60-foot birdie putt on the final hole to win the Qatar Masters, moving the Frenchman from No. 99 to No. 63. Then, Brian Harman shot 69 to tie for third at The Players Championship and went from No. 95 to No. 58 in the world, while Talor Gooch closed with a 67 to tie for fifth, moving him from No. 82 to No. 64.

But it won’t stop there. The field at Austin Country Club is for the top 64 available from the world ranking. Tiger Woods is out with serious leg injuries from his car crash in Los Angeles. Adam Scott said he will not be playing. That means Ian Poulter (No. 65) and Eric van Rooyen (No. 66) are in.

Justin Rose withdrew from the third round at Bay Hill with a bad back and he withdrew last week. It was unclear whether he would enter the Match Play, which he chose to skip in 2017 and 2018. Brooks Koepka had a strain in his right leg that forced him out of The Players and this week’s Honda Classic. His status has not been determined.

Most curious is the case of Gary Woodland, the former U.S. Open champion and a Match Play finalist in 2015. Woodland tested positive for the coronavirus and had to withdraw from the Honda Classic. Under the PGA Tour guidelines, he has to self-isolate for 10 days.

That likely would take him to Wednesday, which ordinarily would be enough time to play the following week. But in this case, the Match Play starts on Wednesday.

Woodland has not decided what he will do. Still to be determined is whether he could concede his match on Wednesday and play the next two days to try to win his group and advance to the knockout portion of the weekend.

Dustin Johnson only looks to have no pulse. He says he gets nervous just like everyone else, and he went into a little detail about how nervous he was Sunday at the Masters.

“I was feeling it from kind of the time when I woke up,” Johnson said in a conference call. “I couldn’t eat any breakfast, really. Took a couple of bites, but it was hard to get down for some reason, which I’ve never had that problem before.”

Johnson says he recalls trying to eat an almond butter and jelly sandwich while on the course. That didn’t go well, either.

“Had to wash it down with water,” he said. “And that was the only way I could get it down.”

With his hands on the club, there was no issue. He won the Masters by five shots.

The Masters is back in April and it will have spectators, which is not to suggest a return to normal.

Tickets will be limited in number (the club doesn't reveal numbers, whether that's tickets or how fast the greens are running on the Stimpmeter). But they won't be limited to the point the club feels the Par 3 Contest can be held safely. The Par 3 course is where everyone flocks on Wednesday afternoon, and there's not a lot of space for social distancing.

Augusta National says it has been canceled for the second straight year, which was not a surprise.

The main golf shop will be open for those on the grounds (everything was online in November). And for a few fortunate media members, there will be a lottery to play the course on the Monday after the Masters.

It didn’t take Collin Morikawa long to learn how to win on the PGA Tour. His first victory came in his sixth start as a pro. A year later, he won a playoff over Justin Thomas at Muirfield Village and a major at the PGA Championship. Now he has a World Golf Championship title.

Now it’s a matter of playing well after winning.

Morikawa didn’t hit his stride at The Players Championship until a 66 in the final round, moving up to a tie for 41st. And it extended a curious trend, although nothing to get alarmed over considering the small sample size.

“I need to grind a little more after a win,” he said.

Morikawa prefers a week off after winning, such as the PGA Championship and his World Golf Championship title, and he found that while he was still fine-tuning, he was not trying to find something in his game.

“Coming into this week was just ho-hum, like everything felt really good,” he said. “I tweaked a couple things here and there, but I’ve just got grind a little more. And I look forward to that.”

Adam Scott had a chance to join Paul Azinger (1987) and Kyle Stanley (2017) as the only players to make birdie all four rounds on the island-green 17th at the TPC Sawgrass.

His shot was estimated at 4 feet below the surface of the water. He came up short and made double bogey.

NBC says The Players Championship averaged 4.6 million viewers for the final round, the most for a PGA Tour event since Tiger Woods won the 2018 Tour Championship and the most watched sports event of the weekend. ... Victor Perez has been nothing if not resilient the last two weeks. He made an 11 on the sixth hole at Bay Hill in the third round and bounced back with a birdie 2 on the next hole. At The Players Championship, he had to make a 25-foot birdie putt on the 18th hole to make the cut, and then shot 69-67 to tie for ninth. ... With his tie for 17th at The Players, Charley Hoffman became the 43rd player to surpass $30 million in career earnings on the PGA Tour. He has four career victories, most recently at the Texas Open five years ago. ... The Honda Classic is naming its media room the Tim Rosaforte Media Center to honor the longtime golf writer who retired after four decades at newspapers, magazines and television. ... Lee Westwood left The Players and headed to Augusta National to play with his son, Sam, who will caddie for him at the Masters next month.

Justin Thomas ($42.9 million) went ahead of Jordan Spieth ($42.7 million) in career PGA Tour earnings for the first time by winning The Players Championship.

“It wouldn't bother me if I only had it for a day.” — Dustin Johnson, on having the Masters green jacket for just five months.