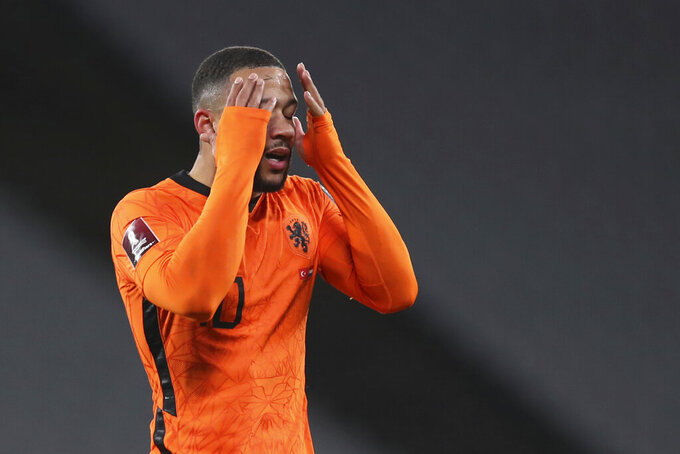 A look at what’s happening in 2022 World Cup qualifying in Europe on Saturday:

Cristiano Ronaldo’s Portugal visits Serbia seeking a second straight victory to start qualification. Coach Fernando Santos will be hoping for some improved finishing from his Portugal in Belgrade after it needed an own goal by an Azerbaijan defender to eke out a 1-0 win in their opening qualifying match. Ronaldo will be eager to pursue his next milestone. He is seven goals from Iran striker Ali Daei’s record of 109 goals scored for a national team. Serbia also got off to a good start this week when Aleksandar Mitrovic came off the bench to score two goals in a 3-2 comeback victory over Ireland. Ireland will be looking to get its first win in its 10th match under coach Stephen Kenny when it hosts Luxembourg.

Top-ranked Belgium travels to Czech Republic without several players due to COVID-19 restrictions. After Borussia Dortmund's Thomas Meunier and Thorgan Hazard were not authorized to make the trip to Prague under current rules imposed by Germany, the Belgian federation announced Friday that Thomas Vermaelen was also ruled out “due to quarantine rules" and returned to Japan. Yannick Carrasco also stayed in Belgium to nurse an ankle and get fit for Tuesday’s game against Belarus. Hazard scored from Meunier's assist midweek in Belgium's opening 3-1 win against Wales. Looking to book a spot at the World Cup for the first time since 2006, the Czech Republic will also try to secure back to back wins after starting its campaign with an emphatic 6-2 victory at Estonia, which is up against Belarus in the group's other game.

The Netherlands looks to get its campaign back on track against Latvia after slumping to a 4-2 defeat to Turkey in its first Group G match. “We want to see a better Netherlands team,” said coach Frank de Boer. “We’ll see tomorrow if there are changes.” Despite a nationwide lockdown, the Netherlands will be cheered on by 5,000 fans at the Johan Cruyff Arena in Amsterdam as part of a government-approved experiment to evaluate how to safely reopen public venues amid the coronavirus pandemic. Norway hosts Turkey in a match between the top two in the group after the first match, while Montenegro hosts Gibraltar in an afternoon match in Podgorica.

The early front runners meet as Russia hosts Slovenia in front of potentially more than 10,000 fans who are permitted into the stadium in Sochi. It is the first meeting between the teams since Slovenia beat Russia in the playoffs to qualify for the 2010 World Cup. And Slovenia is off to strong start in qualifying for Qatar after beating 2018 runner-up Croatia in the opening round when Russia won at Malta. Croatia next plays Cyprus, which was held 0-0 by Slovakia.