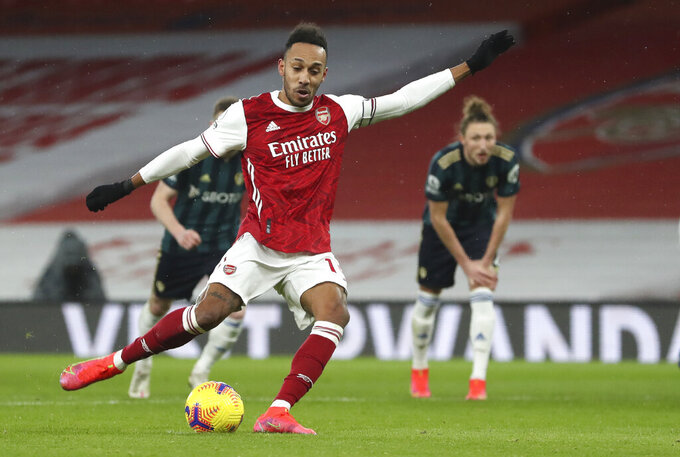 Arsenal's Pierre-Emerick Aubameyang shoots to score from the penalty spot during the English Premier League soccer match between Arsenal and Leeds United at the Emirates stadium in London, England, Sunday, Feb. 14, 2021. (Catherine Ivill/Pool via AP)

A look at what’s happening in the Europa League ahead of the first-leg matches in the last 32 on Thursday:

United is back in the Europa League for the third time in five seasons, a sign of the times for a club once regarded as one of the continental heavyweights. Ole Gunnar Solskjaer's team is regarded as the competition favorite heading into the knockout stage but, despite being top of the Premier League just last month, is coming into the match against Sociedad out of form after winning just two of its last seven league games. Like United, Sociedad — energized by the arrival of offseason signing David Silva from United's rival, Man City — had a spell in first place in its domestic league this season but is now outside the top four in La Liga. Sociedad winger Adnan Januzaj plays against the team who sold him in 2017 after being part of the United academy and good friends with Paul Pogba. The first leg takes place in Turin, Italy, because of coronavirus-related travel restrictions on arrivals to Spain from Britain during the pandemic.

Another match relocated — this time to Rome — because of travel restrictions, it features clubs who have reached five UEFA Cup/Europa League finals without winning one, although the Gunners did win the Inter Cities Fairs Cup forerunner in 1970. Benfica dropped into the Europa League after losing in Champions League qualifying and has yet to lose in 26 home matches in the competition, a record. Midfielder Pizzi is the top scorer in this season's competition with six goals. Arsenal's best chance of qualifying for next season's Champions League looks to be by winning the Europa League because Mikel Arteta's team is only 10th in the Premier League. Arsenal defender David Luiz is set to face his former club.

Zlatan Ibrahimovic is in the knockout stages of a European competition for the first time since Manchester United’s run to the Europa League title in 2017 as Milan heads to Serbia. The game pits together two former European champions as 1991 European Cup winner Red Star hosts the seven-time continental champion from Italy. Milan may rest players ahead of Sunday’s game against rival Inter Milan. Red Star’s coach is former Inter player Dejan Stankovic. His team has plenty of experience of fighting its way through Champions League and Europa League qualifiers but has only reached the knockout rounds on one other occasion in the last decade. Red Star’s passionate fans usually make their stadium an intimidating place to visit with chants, flares and elaborate organized displays of support. This time the stadium will be empty because of the pandemic.

Sébastien Haller was key to Ajax’s hopes of a European trophy -- at least until the Dutch club forgot to register him for the Europa League. The box next to the name of the Ivorian striker, Ajax’s record signing, wasn’t ticked when the club sent its squad list to UEFA. Worse followed when goalkeeper André Onana was banned for a year over a failed drug test. Ajax will have to hope Lille is more focused on its bid to dethrone Paris Saint-Germain in the French league, where the hosts lead PSG by a single point. Ajax will bid to become the first team to score against Lille in more than a month. Lille has not conceded any goals in its last six league and cup games.

Wolfsberg is set to play the biggest home game in its 90-year history but has to do it in Hungary, not its native Austria, because of travel restrictions affecting Tottenham. Wolfsberg has been on the rise in recent years, first reaching the Austrian top division in 2012 and the Europa League group stage in 2019. This will be its first time in the knockout stages of a European competition. Tottenham manager Jose Mourinho suggested he might rest key players after a busy period of games domestically, most recently a 3-0 loss in the Premier League to Manchester City which came less than three days after an extra-time loss to Everton in the FA Cup. Goalkeeper Hugo Lloris was at fault for perhaps two of the goals against City but Mourinho said the France international had “all my trust and confidence.”