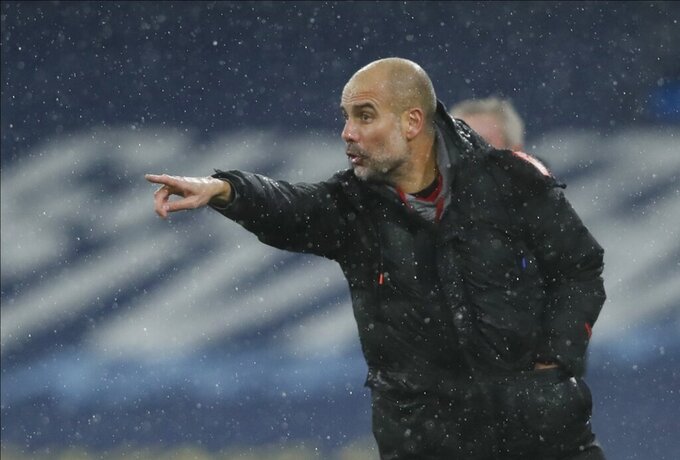 Manchester City is without five players at Chelsea due to coronavirus infections, with only goalkeeper Ederson, striker Gabriel Jesus and defender Kyle Walker identified as among the five. City is unusually low in eighth place in the Premier League, behind Chelsea in sixth on goal difference. After only collecting four points from its last five matches, Chelsea has lost ground in the title race. One of the reasons behind Chelsea’s dip in form is Timo Werner’s struggles in front of goal with the summer signing from Leipzig not scoring in two months. Fourth-place Leicester, which is three points ahead of Chelsea, is at Newcastle on Sunday. Newcastle has struggled for goals this season and netted only 17 times in 15 league games, but held leader Liverpool 0-0 on Wednesday. Fulham’s match against Burnley has been postponed on Sunday due to a coronavirus outbreak at the west London club.

Atlético Madrid visits Alavés seeking a fourth consecutive win at a Mendizorroza stadium that could see snowfall according to weather forecasts. Atlético enters the match in second place at one point behind Real Madrid, but Diego Simeone’s side has played three games fewer. Atlético has not lost at Alavés in eight visits under Simeone. Barcelona will have Lionel Messi back in its lineup for a trip to Huesca after a right-ankle problem sidelined him for last round’s draw with Eibar. Barcelona is in sixth place and coach Ronald Koeman has admitted its chances of challenging for the title are fading. Third-place Real Sociedad welcomes a struggling Osasuna. Sociedad finally broke a long winless streak last round and will seek another three points to strengthen its hold on a Champions League spot. Elche visits Athletic Bilbao after getting a boost by holding Madrid to a draw last round, while Granada is at Eibar hoping to remain in competition for a Europa League berth.

Serie A leader AC Milan will be met by a familiar face when it travels to midtable Benevento in its first match back after the winter break. Benevento is led by former Milan star player and coach Filippo Inzaghi. Milan, which will still be without injured forward Zlatan Ibrahimović, is the only unbeaten team across Europe’s top five leagues. Inter Milan is second, a point behind its city rival, and can take a two-point lead at the top for a few hours at least if it beats relegation-threatened Crotone in the first match of the day. Nine-time defending champion Juventus hosts Udinese in the final match of the round. All the Serie A teams are playing on the same day. Fourth-place Sassuolo faces a tricky trip to Atalanta, which is only four points below its opponent. Third-place Roma hosts Sampdoria. At the other end of the table, Torino is bottom and visits Parma, which is only two points above the relegation zone. The other team in the drop zone, Genoa, hosts Lazio. Also Sunday, it's: Cagliari vs. Napoli; Fiorentina vs. Bologna; and Spezia vs. Hellas Verona.

Bayern Munich aims to reclaim the Bundesliga lead with a win at home over lowly Mainz, which is still in turmoil amid boardroom changes. Rouven Schröder quit as sporting director when he heard the club was talking to his predecessor Christian Heidel about a return. Heidel has since returned to the board of directors, while former Mainz coach Martin Schmidt has returned to take the vacant sporting director position. The club also fired Jan-Moritz Lichte as coach and appointed former youth coach Jan Siewert on an interim basis. Mainz has only one win from its opening 13 league games, while Bayern has only one loss. Borussia Dortmund hosts Wolfsburg in Sunday's other game.