Maui Musings: Finding the right schedule in a long year 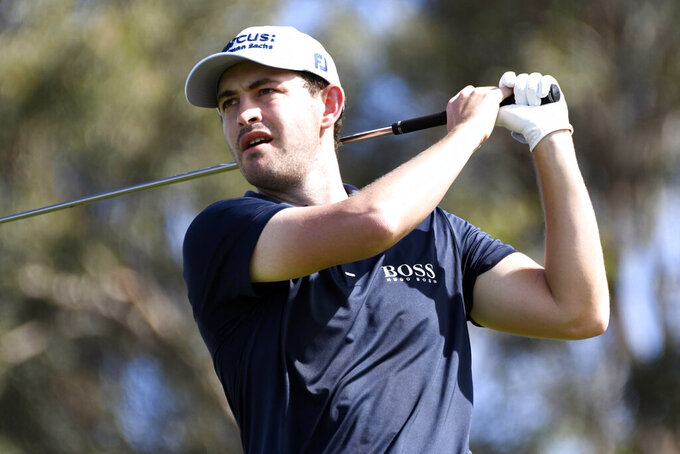 Patrick Cantlay hits from the first tee during the second round of the Tournament of Champions golf event, Friday, Jan. 8, 2021, at Kapalua Plantation Course in Kapalua, Hawaii. (Matthew Thayer/The Maui News via AP)

KAPALUA, Hawaii (AP) — There are 32 players in the Sentry Tournament of Champions who will take the 30-minute flight to Oahu next week for the Sony Open, the second leg of the Hawaii Swing.

That might be a record number any other year. Just not this one.

The winners-only start to the year at Kapalua is now bloated with players who reached the Tour Championship because of the COVID-19 pandemic that cost the PGA Tour three months of play. That added 16 players to Maui for a 42-man field.

Ten players are not playing next week, which is typical. For the Sony Open, it doesn't help that six of those players are among the top 10 in the world, starting with Dustin Johnson, Jon Rahm and Justin Thomas.

Johnson has a busy West Coast once he gets back from Saudi Arabia. Rahm has played The American Express every year since he turned pro and is a past champion. Thomas is headed for an overseas vacation before playing in Abu Dhabi.

They all can't be everywhere, though it seems most everyone wants to be at Kapalua — a strong field with no cut, stunning views, short days, good vibes.

The elite, no matter how long they've been around, try to gear their games for the biggest weeks.

Xander Schauffele grew up in San Diego and prefers the West Coast, which is where he will spend most of the next two weeks “and then kind of wiggle out to Florida when I have to.”

Patrick Cantlay is another Californian who now has set up camp in Jupiter, Florida, like so many other players who spent enough time in school to understand how taxes work. He is more concerned with how he plays than where he plays, especially as it relates to preparing for the majors.

“Playing well is the best place to get ready for the places that I'm headed, and for me that's playing places I like,” he said. “So I'm going to play a decent amount, like the California swing, and play some of my favorite events. And other than that, it's just prepping really well for the majors.”

Tiger Woods was the master at building a schedule for the majors and his own game. Even when healthy during his peak years, he averaged just short of 22 starts a year worldwide. He usually faced the strongest fields. He was always fresh.

Cantlay seems to favor that approach. He might have been guilty of not playing more last year, and it was particularly tough for him when he missed the Tour Championship by what amounted to one shot. Just don't expect him to turn into Patrick Reed or Sungjae Im, who never seem to take a break.

“I feel like quality over quantity's big for me,” Cantlay said. “So I would rather show up to every week feeling like I'm totally ready to go than ever feel like I'm on the road and wishing I was home.”

PGA Tour players were not immune to the spike in COVID-19 cases over the holiday season.

Jim Herman had to withdraw from the Tournament of Champions when he tested positive. Herman is in the field next week at the Sony Open.

Schauffele and Webb Simpson nearly joined him in missing out on Maui.

Schauffele tested positive on Dec. 18, and after his self-isolation, he was able to make it to Kapalua. He felt a little rust from having to go 10 days without practice, and his shins were hurting Friday from walking the hills on the Plantation Course. But he can't complain about being 11-under par over two days, starting the weekend three shots out of the lead.

One of his five children had a cold right before Christmas, and Simpson figured he picked up whatever was ailing his daughter. But as he got worse, Simpson went for a COVID test and the result came back positive on Dec. 28, right about the time he was losing his sense of taste.

That meant no practice at Quail Hollow Club in Charlotte, North Carolina, and only a few times sneaking into the yard to swing a club. He finished his self-isolation in time to fly from North Carolina to the middle of the Pacific, arriving on Wednesday afternoon. Two days later, he was five shots out of the lead.

“Thankfully it worked out, the timing of it, where I was able to play this week,” he said. “Happy to be here.”

He still can't taste anything. That's apparently not affecting his game.

FAREWELL TO AN OLD FRIEND

Scottie Scheffler was in high school when he picked up a Nike VR Pro 3-wood in about 2011. He used it throughout high school in Dallas, put it on the bench for a few years in college at Texas, and has used it since turning pro.

So imagine how he felt a week ago Saturday at Royal Oaks in Dallas when he was getting ready for the new year and the club cracked.

“I had my wife pick up about 10 3-woods from the house that were all backups, and she brought them to the range,” he said. “We found something that could work for the week.”

He has gone to a Callaway for now and he'll figure it out from there. But this was like losing a friend. Scheffler said his old 3-wood didn't have a lot of loft so he could flight it down, and it was softer than the newer clubs.

“When I wanted to hit it far, I just teed it up a little higher, hit it higher on the face,” he said. “I got to know the club really well and for me, I knew exactly what I needed to do with it each time.”