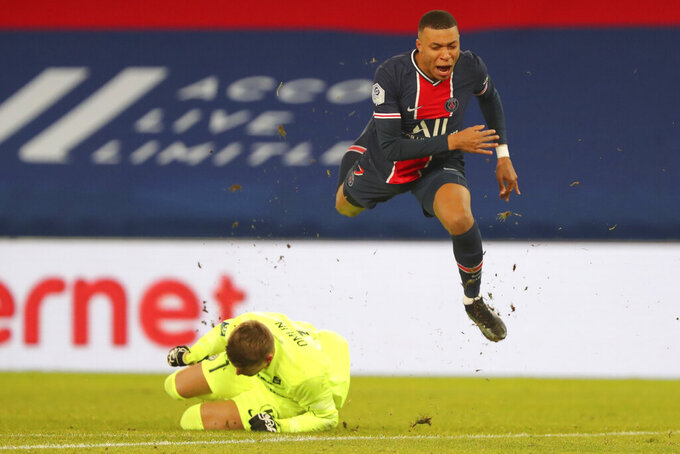 PSG moved three points clear of second-place Lille, which can move level on points by winning at fifth-place Rennes on Sunday but has a vastly inferior goal difference.

In an unexpected sight at Parc des Princes stadium, Pochettino returned to coach PSG just one week after testing positive for the coronavirus.

“I feel better,” Pochettino told broadcaster Telefoot before kickoff. “I’m allowed to be here tonight as long as I keep my distance.”

The game became one-sided after Montpellier goalkeeper Jonas Omlin was sent off in the 19th minute for clattering into Mbappe just outside the penalty area. Omlin was replaced by Dimitry Bertaud.

Mbappe put PSG ahead in the 34th when he collected a pass from Angel Di Maria and lifted the ball over Bertaud. But the goal came with Montpellier midfielder Florent Mollet out of action after limping off with an ankle injury.

A flurry of action saw Mbappe set up Neymar in the 59th, before Icardi turned in right back Alessandro Florenzi's cross one minute later. Icardi then unselfishly set up Mbappe for an easy goal in the 62nd.

Mbappe's brace took him to the top of the scoring charts with 14, two more than Reims striker Boulaye Dia.

Pochettino had been expected to be replaced by assistant coach Jesus Perez, who stood in for him in last Saturday's away win at Angers.

Unlike in previous PSG matches, however, Pochettino wore a face mask throughout.

In Saturday's games, fourth-place Monaco will look to make it six games unbeaten when it hosts sixth-place Marseille.