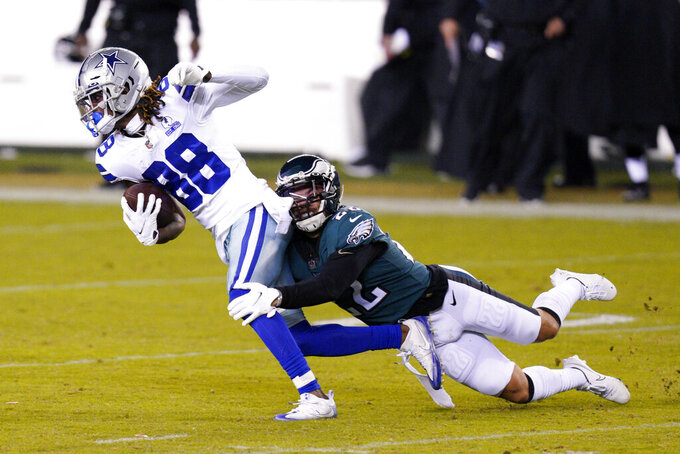 Dallas Cowboys' CeeDee Lamb (88) tries to get past Philadelphia Eagles' Marcus Epps (22) during the second half of an NFL football game, Sunday, Nov. 1, 2020, in Philadelphia. (AP Photo/Chris Szagola)

ARLINGTON, Texas (AP) — Mike McCarthy's first season as coach of the Dallas Cowboys is all but lost, in large part because star quarterback Dak Prescott's season-ending ankle injury triggered a sequence of four different starters in a span of five weeks.

A defense that took too long to adjust to a new scheme shares the blame.

The Cowboys had their best showing since the gruesome scene of Prescott's broken right ankle in Week 5 against the New York Giants, a game they rallied to win when Andy Dalton led a pair of drives to field goals in the fourth quarter.

But the 24-19 loss to undefeated Pittsburgh on Sunday was the fourth straight defeat without Prescott, and left Dallas (2-7) tied for last in the NFC East with the New York Giants. Philadelphia (3-4-1) leads the division with a losing record.

“I think we are making some good steps forward,” running back Ezekiel Elliott said. “You said we were in last place in the division? Is that what you said? I mean, we still got seven games left. So I think there is still a shot.”

Dalton should be ready for the visit to Minnesota on Nov. 22 after going from the concussion protocol to the COVID-19 list.

Rookie Ben DiNucci was overmatched in his only start after Dalton's concussion, and the COVID-19 development led to Garrett Gilbert making his first career start against the Steelers six years after he was drafted.

Gilbert brought enough life to the offense to give Dallas some degree of encouragement about the most important position for the remaining games. And McCarthy doesn't sound ready to concede going into the open week.

“We’ll spend time self-scouting it all, both individually for the players and all three phases,” McCarthy said. “We’ve got to get going. Everyone knows what our record is, so we need to get going and we need to start stacking wins.”

The Dallas defense gave up the most points in franchise history through five weeks and is still on pace to set a club record. But at least the pace is no longer more than 500 points (it's about 460).

With the pandemic eliminating any in-person offseason work to try to get familiar with the multiple looks and disguises in defensive coordinator Mike Nolan's scheme, the Cowboys blew assignments week after week before looking more sound the past two games.

“I do feel like we've raised a bar and we are getting better,” defensive end DeMarcus Lawrence said.

Even with all the issues at quarterback, there are signs the receiving corps can be as strong as Dallas hoped after CeeDee Lamb unexpectedly fell to them at No. 17 in the draft.

While Amari Cooper hasn’t been spectacular after signing a $100 million, five-year contract in the offseason, he’s been steady. Lamb was the first rookie since at least 1950 with five or more catches in each of his first six games, and Michael Gallup has shown he can be a threat.

The offense has to start finding the end zone if the Cowboys are going to have any hope of catching the Eagles in the second half. Dallas has one meaningful touchdown in four full games without Prescott: Gilbert's second-quarter connection with Lamb against the Steelers. The only TD in two Dalton starts was late in a blowout loss to Arizona.

Rookie cornerback Trevon Diggs had his first two interceptions in the Week 8 loss to the Eagles. He seems to be the best hope for the Cowboys to stabilize the NFL's worst turnover margin (minus-13). After four takeaways against Philadelphia, Dallas was back to zero against the Steelers. Diggs came out of that game with a foot injury; there's no word yet on the severity.

Barring a big turnaround, Elliott is going to have his worst full season as a pro. His per-carry average is under 4 yards for the first time in his career. The two-time rushing champion doesn't have a 100-yard game when he'd never gone more than two games without one to start a season in his first four years.

Elliott has 572 yards rushing and five touchdowns. At this rate, the chorus will only grow that the Cowboys shouldn't have given in during his 2019 holdout, which ended with Elliott signing a $90 million, six-year extension days before the opener.

Rookie center Tyler Biadasz is expected to miss at least two weeks after injuring his hamstring during warmups before the Pittsburgh game. Veteran Joe Looney, the starter at the beginning of the season before injuring a knee, has his job back for now. Cornerback Chidobe Awuzie is likely to return from a groin injury after the open week. But the loss of Prescott overrides everything.

1-8 — The Cowboys finally covered the spread for the first time this season against Pittsburgh. Dallas was the biggest underdog it had been at home in at least 31 years. The final spread was 15, and the Cowboys lost by five.

Baltimore is the only team remaining on the Dallas schedule with a winning record at the moment. But looks can be deceiving. Minnesota is playing better, Washington blew out the Cowboys at home and No. 1 overall pick Joe Burrow seems to be figuring things out after replacing Dalton, a nine-year starter in Cincinnati.