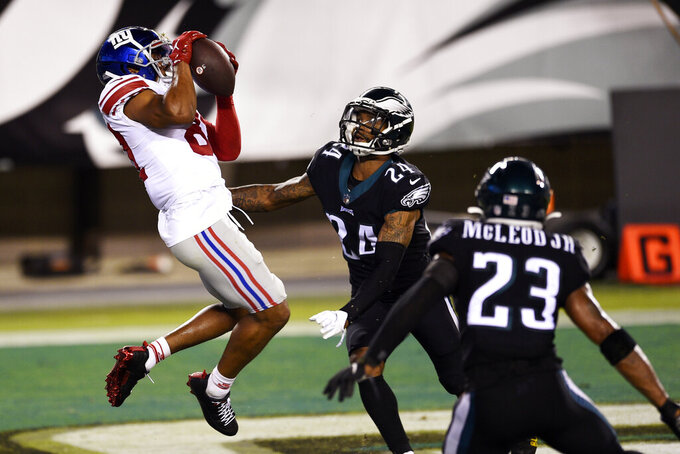 PHILADELPHIA (AP) — Philadelphia Eagles safety Rodney McLeod and several of his teammates rode on a double-decker bus and encouraged people to vote as they traveled throughout the city on Tuesday.

Using megaphones to address crowds along several routes, McLeod and his teammates emphasized the importance of voting and reminded everyone to wear masks to protect themselves from COVID-19.

“It has been amazing to see how excited and prideful everyone is about voting,” McLeod said. “When they see the bus and give us a thumbs-up that they voted, we are confident that change is going to come.”

“Go out there and vote. Make your voice be heard,” Hurts shouted to the crowd.

McLeod and his wife, Erika, developed a “My Voice My Vote” initiative in partnership with their Change Our Future Foundation to support and encourage civic engagement and voting in the city. They provided free shuttle service to polling locations in North Philadelphia and provided meals to volunteer poll workers.

City officials joined the McLeods and the Eagles players on the bus and a DJ turned the ride into a party atmosphere.

“It drew a great reaction out of people. They were happy to see some of their favorite Eagles in the middle of the hood,” said Pastor Carl Day, a Cowboys fan who was along one of the bus stops. “I didn’t care to see him after he scored a TD against my team, but it was cool of them.”

McLeod returned a fumble 53 yards for a touchdown in Philadelphia’s 23-9 victory over Dallas on Sunday night. The Eagles (3-4-1) are first in the NFC East and have a bye this week.