Medvedev in 5, finally, advances to 4th round in Australia 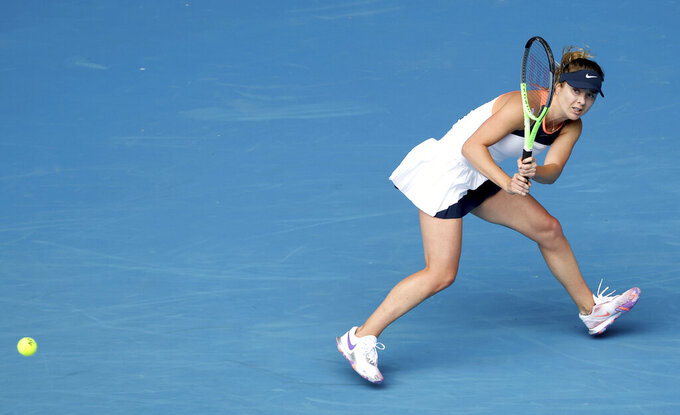 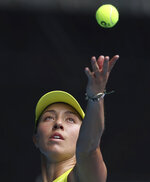 MELBOURNE, Australia (AP) — Daniil Medvedev finally worked out how to a win a five-setter. All by himself.

The fourth-seeded Medvedev was 0-6 in career five-setters, and his match against No. 28-seeded Filip Krajinovic looked like it was going all the way in the third round of the Australian Open.

After some angry outbursts from an increasingly animated and chatty Medvedev directed at his box in an otherwise empty Rod Laver Arena — fans have been banned as a COVID-19 precaution — his coach, Gilles Cervara, got up and left.

Medvedev had been bothered by a problem with his upper left leg and had a medical timeout for treatment late in the fourth set.

When he fell behind 5-2 in the fourth, Medvedev shouted, “I never saw something like this!”

He returned to better much play in the deciding set, smacking an inside-out forehand winner to a corner to close an 18-stroke exchange and break to go up 2-0.

He didn't drop another game as he seized the momentum back from Krajinovic, who was previously 4-1 in matches that went the full five sets.

“In contrary with previous matches where I could get tight . . . here I was really calm to finish the match," Medvedev said. “Really happy I got the five-set win."

The win stretched Medvedev’s winning streak to 17 matches, including his successful run to the title at the 2020 season-ending ATP Finals and with Russia last week at the ATP Cup.

Andrey Rublev had a 7-5, 6-2, 6-3 win over 39-year-old Feliciano Lopez and stayed on course for an all-Russia quarterfinal match against Medvedev.

Rublev and Medevedev both went unbeaten in the 12-team ATP Cup. The seventh-seeded Rublev, who will meet Casper Ruud of Norway in the fourth round, won a tour-high five titles in 2020 and, with a 41-10 win-loss record, finished the year equal with Novak Djokovic for most tour-level match wins.

Other winners from the warmup week are through on the women’s side.

Top-ranked Ash Barty, who won the Yarra Valley Classic last week for her second title on home soil, beat Ekaterina Alexandrova of Russia 6-2, 6-4 to reach the fourth round of the Australian Open for the third straight year.

She said while it felt strange not having fans in the stadium for the first time in her career at the highest level, there were some things she didn't mind.

“It feels a little bit like practice," she said, "so we’re pretty used to it.”

The No. 18-seeded Mertens won the Gippsland Trophy tuneup tournament at Melbourne Park in the week between players coming out of mandatory quarantine in Australia and when the year’s first major tournament started.

The 2018 Australian Open semifinalist will take a seven-match winning streak into her match against Karolina Muchova in the fourth round.

No. 25-seeded Muchova staged an astounding second-set comeback from a 5-0 deficit in near silence, which only made the turnaround seem more bizarre as she beat No. 6 Karolina Pliskova 7-5, 7-5.

Muchova played in an empty Rod Laver Arena. There were no fans in the stands due to the start of a five-day lockdown imposed by the Victoria state government in response to a COVID-19 outbreak at a quarantine hotel. Up to 30,000 spectators daily — 50% of capacity — had been admitted on previous days.

“It’s a big difference,” Muchova said. “I was actually getting, like, happy yesterday morning that I’m finally going to play on a bigger court and there’s going to be a crowd. But unlucky now for five days here. Hopefully then it’s going to be back again.”

No. 22 Jennifer Brady and No. 28 Donna Vekic had wins to advance to fourth-round showdown.

No. 61-ranked Jessica Pegula reached the fourth round by drubbing Kristina Mladenovic 6-2, 6-1.

Even Pegula seemed surprised by her best career showing at a major tournament, which started with a first-round win over two-time Australian champion Victoria Azarenka.

“I don’t really expect to be playing this good next match,” Pegula, the daughter of Terry and Kim Pegula, owners of the NFL Bills and NHL Sabres, said of her fourth-rounder against No. 5-seeded Elina Svitolina.

Svitolina, a tour veteran from Ukraine who has won 66 Grand Slam matches, needs one more win to match her best showing at Melbourne Park. She was a semifinalist at both Wimbledon and the U.S. Open in 2019.