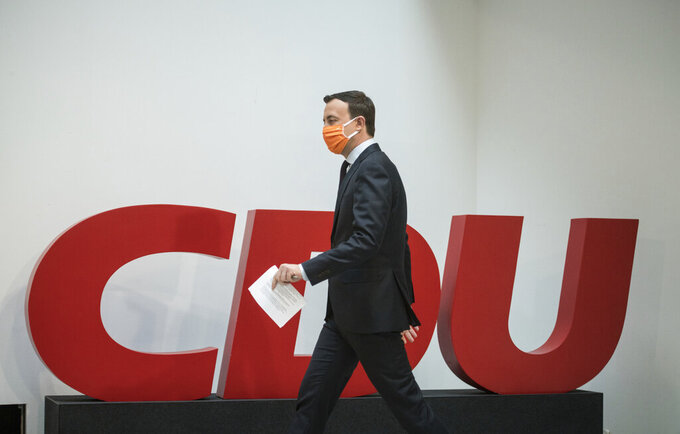 Paul Ziemiak, secretary general of the conservative Christian Democratic Union party, CDU,wears a face mask as he arrives for a news conference In Berlin, Germany, Monday, Oct. 26, 2020. German Chancellor Angela Merkel's CDU party said it would push back a congress planned for early December to elect a new leader due to a surge in coronavirus infections. The conservative party's top brass will reexamine the situation in mid-December to determine its next steps, Paul Ziemiak said. (Stefanie Loos/Pool via AP)

BERLIN (AP) — German Chancellor Angela Merkel's party on Monday delayed for the second time a decision on who will become its new leader, putting off a convention planned for December in a coronavirus-prompted move that irked one of the top contenders.

Whoever wins the Christian Democratic Union's leadership will be in pole position to become the center-right candidate to succeed Merkel as chancellor in a German election expected next fall, though that isn't guaranteed.

Current leader Annegret Kramp-Karrenbauer, Merkel's immediate successor as party chairwoman, took over in late 2018. She struggled to impose her authority before announcing in February that she wouldn’t run for chancellor in the 2021 election and would relinquish the party leadership.

A special April convention for about 1,000 delegates to choose the new CDU leader fell victim to the the first phase of the COVID-19 crisis. The party put off the decision until a regular convention in Stuttgart on Dec. 4.

With new virus infections rebounding in Germany as they are across Europe, and gatherings again being restricted in many places, officials concluded that the Stuttgart convention couldn't go ahead either.

The party's general secretary, Paul Ziemiak, said the leadership still hopes to hold a convention with delegates present. It hopes to decide Dec. 14 on when the choice will be made; and if not then, at a meeting scheduled for Jan. 15-16.

Deciding the issue with an online vote isn't currently legally possible, though the party is pushing for that to change. If nothing else is possible, the party could hold an online convention followed by a mail-in vote, Ziemiak said.

There are three main contenders for the CDU leadership: Friedrich Merz, 64, a conservative former leader of its parliamentary group who spent years away from front-line politics; Armin Laschet, 59, the more liberal governor of North Rhine-Westphalia state; and Norbert Roettgen, 55, who chairs parliament’s foreign affairs committee.

The CDU’s poll ratings have been bolstered by the Merkel government’s management so far of the pandemic, and it has a strong lead. But Merkel, 66, has vowed not to seek a fifth term as chancellor.

Surveys suggest that Merz, who narrowly lost to Kramp-Karrenbauer in 2018, is a favorite with the party's grassroots, but he holds no government or other formal political post to bolster his profile.

Merz had pushed for a vote in December. He criticized the delay before it was even officially announced, tweeting that it was “a decision against the CDU rank and file."

Earlier Wednesday, Merz — a one-time rival of Merkel, who ousted him as the party's parliamentary leader in 2002 — told ARD television “there are parts of the party establishment ... that want to prevent me from becoming party chairman.”

Ziemiak said that “there is no reason to assume that.”

“We stand together as a party, and that goes for everyone,” he said.

A decision on who runs for chancellor will have to be taken jointly with the Christian Social Union, the CDU's Bavaria-only sister party. The CSU leader, Bavarian governor Markus Soeder, 53, is also widely considered a potential candidate.