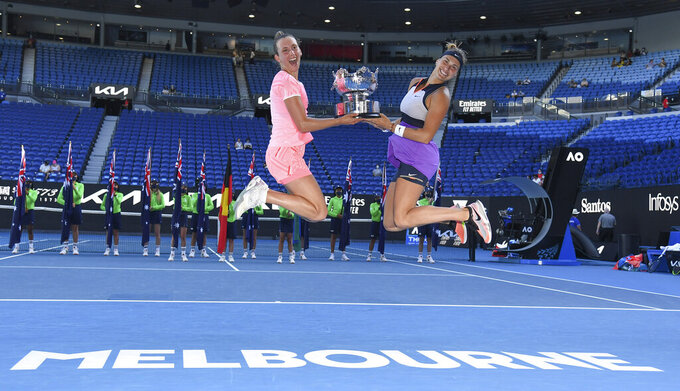 Belgium's Elise Mertens, left, and Aryna Sabalenka of Belarus celebrate with their trophy after defeating Barbora Krejcikova and Katerina Siniakova of the Czech Republic in the women's doubles final at the Australian Open tennis championship in Melbourne, Australia, Friday, Feb. 19, 2021.(AP Photo/Andy Brownbill)

It is likely to be their last for a while.

Sabalenka, a Top 10 player with nine WTA singles titles, wants to focus on the singles at the majors but plans to combine with Mertens for some Premier-level doubles events.

The 22-year-old from Belarus was the dominant player on court as she and Mertens, the U.S. Open doubles champions in 2019, combined for a 6-2, 6-3 win over third-seeded Barbora Krejcikova and Katerina Siniakova of the Czech Republic.

Krejcikova and Siniakova were the Wimbledon and French Open women's doubles champions in 2018, but struggled against two players who each reached the fourth round of the Australian Open singles draw before losing to eventual semifinalists.

No. 7-ranked Sabalenka lost to 23-time major winner Serena Williams in three sets. Mertens, who won a title at a tuneup tournament the weekend before the Australian Open began, lost to Karolina Muchova.

Mertens plans to keep playing doubles at the majors but Sabalenka is switching gears.

“I feel like it’s a little bit more stress (playing singles and doubles) in the Grand Slams. I just want to focus on singles and manage my energy,” Sabalenka said. "Still when you go out for doubles, you’re still there for competing, to put everything you have — sometimes it’s not really working well with me.

“I just want to save it for singles, try something different this year and see what happens on the Grand Slams."

The Australian Open has had some unprecedented challenges for players because of regulations in place for the COVID-19 pandemic, including a 14-day quarantine for all international arrivals in the country.

It was more difficult for 72 players who were forced into hard lockdown — not allowed to leave their quarantine accommodation for any reason — after possibly coming into contact with people on their charter flights who tested positive for the coronavirus after landing in Australia.

Krejcikova has another chance at a title in Australia after combining with American Rajeev Ram to secure a spot in the mixed doubles final on Saturday against Australian wild cards Sam Stosur and Matthew Ebden.

Ram is also in the men's doubles final on Sunday with teammate Joe Salisbury against Ivan Dodig and Filip Polasek. Ram and Salisbury are the defending champions.