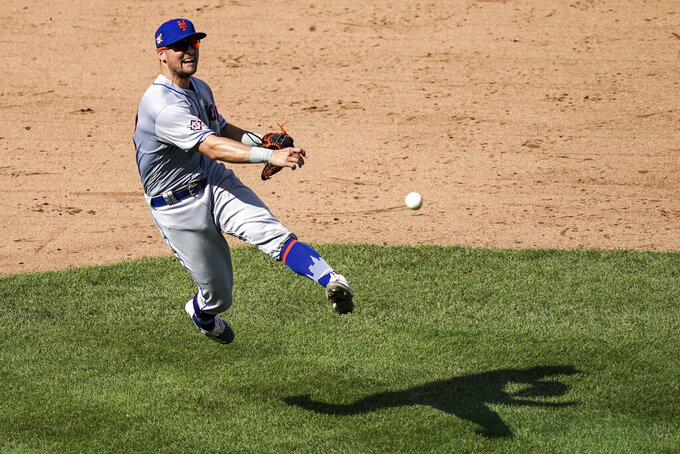 FILE - In this Aug. 29, 2020, file photo, New York Mets third baseman J.D. Davis (28) throws out New York Yankees' Aaron Hicks at first after fielding a ground ball during the eighth inning of a baseball game in New York. Davis and the Mets argued the first of 13 scheduled salary arbitration cases this month. The third baseman and outfielder asked for a raise from $592,463 to $2,475,000 during Tuesday’s hearing before Gil Vernon, Mark Burstein and Jeanne Vonhof. The Mets argued for $2.1 million. Davis is eligible for arbitration for the first time. (AP Photo/John Minchillo, File)

The decision by Gil Vernon, Mark Burstein and Jeanne Vonhof was announced Friday, three days after they heard the case. Because of the pandemic, hearings are being conducted by Zoom for the first time rather than in person.

Davis, 27, hit .247 with six homers and 19 RBIs during the pandemic-shortened season.

Santander gets a raise from $572,500 to $2.1 million rather than his $2,475,000 request, the same figures exchanged by Davis and the Mets. Santander’s case was heard Wednesday by arbitrators Melinda Gordon, Richard Bloch and Frederic Horowitz.

Santander, 26, hit .261 with 11 homers and 32 RBIs in the pandemic-shortened season. He was eligible for arbitration for the first time.

The 29-year-old Choi receives a raise to $2.45 million instead of the Rays' $1.85 million offer. Margaret Brogan, Gary Kendellen and Brian Keller heard the case Thursday.

Right-hander Jack Flaherty went to a hearing with St. Louis on Friday, asking for a raise from $604,500 to $3.9 million. The Cardinals argued for $3 million to arbitrators Howard Edelman and Steven Wolf and Walt De Treux.

Teams won seven of 12 hearings last year, including six of the first seven, and had a winning record for the fourth time in six years.