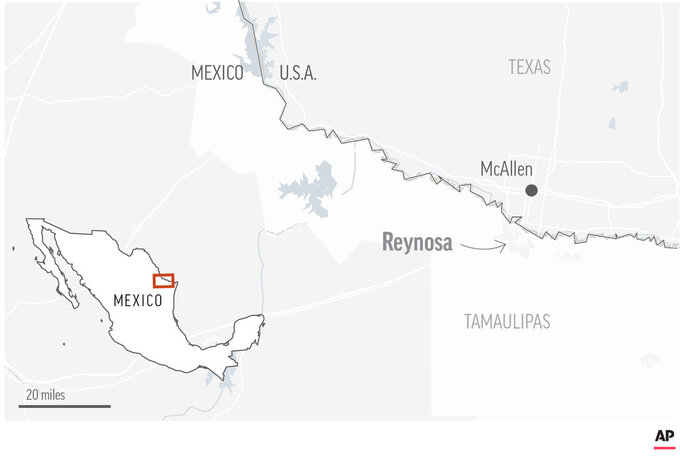 CIUDAD VICTORIA, Mexico (AP) — Mexico’s president vowed to investigate the border shootings that left 19 people dead over the weekend, even as the latest homicide figures showed a rebound in killings nationwide.

President Andrés Manuel López Obrador said evidence indicated that 15 of the victims were innocent bystanders. The other four dead were suspected gunmen from a group that drove into the northern border city of Reynosa and opened fire indiscriminately.

“Everything indicates that it was not a confrontation, but rather a commando that shot people who were not involved in any conflict," López Obrador said.

The government of Tamaulipas state, where Reynosa is located, said in a statement there was evidence the killings involved “organized crime,” which in Mexico is generally used to refer to drug cartels. Cartels in the Reynosa area have become increasingly involved in migrant trafficking or charging protection fees to migrant traffickers.

Raymundo Ramos, who leads one of the state's most active human rights groups, said he believed the killings were related to the June 6 elections that chose new mayors for Reynosa and most other Mexican cities and towns.

“This is clearly an act of post-electoral terror directed at the people of Reynosa, and probably a warning for the rest of the townships in Tamaulipas,” wrote Ramos. Drug gangs in Mexico rely heavily on intimidating or coopting local governments to extort money or gain protection from municipal police.

Reynosa is located across the border from McAllen, Texas, and has been the scene of fighting between factions of the Gulf cartel. But those disputes usually target rival gunmen or security forces. The dead in the Saturday attack included taxi drivers, workers and a nursing student.

On Monday, federal prosecutors said they were taking over the case, in which one suspect has been arrested. The Attorney General's Office said the attack was “the result of territorial disputes between gangs from Rio Bravo, Tamaulipas and the cartels that operate in Reynosa.” Rio Bravo is located just to the east of Reynosa.

Authorities are still investigating the motive, though in the past, drug cartels have sometimes used random killings of civilians to turn up the heat on rival gangs, or intimidate local authorities.

María Elena Morera, director of the civic anti-crime group Common Cause, said many people have become inured to such violence.

“Mexicans have become accustomed to all these atrocities, without there being any real reaction," Morera said. “In the face of so much violence, people prefer not to let the pain in, and turn away.”

The killings Saturday in Reynosa, and the latest nationwide homicide figures, suggest that López Obrador's “hugs not bullets” crime strategy is doing little to decrease killings.

The government says homicides declined 2.9% in the first five months of 2021 compared to 2020, but that may be because January and February of this year were marked by Mexico's worst coronavirus wave, when public activities were curtailed.

“This is nothing,” Morera said of the drop. “It is as if you keep a patient in a coma and then say he's doing very well.”

Tamaulipas Gov. Francisco García Cabeza de Vaca called the Reynosa victims “innocent citizens," and said “Criminal organizations must receive a clear, explicit and forceful signal from the Federal Government that there will be no room for impunity, nor tolerance for their reprehensible criminal behavior."

García Cabeza de Vaca belongs to the rival National Action Party and is himself being investigated by the federal prosecutor’s office for organized crime and money laundering - accusations he says are part of plan by López Obrador’s government to attack him for being an opponent.

On Sunday, he said “the people were quiet as if nothing had happened, but with a feeling of anger because now crime has happened to innocent people.”

The attacks sparked a deployment of the military, National Guard and state police across the city.

The area’s criminal activity has long been dominated by the Gulf cartel and there have been fractures within that group. Experts say there has been an internal struggle within the group since 2017 to control key territories for drug and human trafficking. Apparently, one cell from a nearby town may have entered Reynosa to carry out the attacks.

Earlier this month, López Obrador praised the drug cartels for not disrupting the June 6 mid-term voting, even though three dozen candidates were killed during the campaigns.