A microphone for Fowler, but it's not for everyone on tour 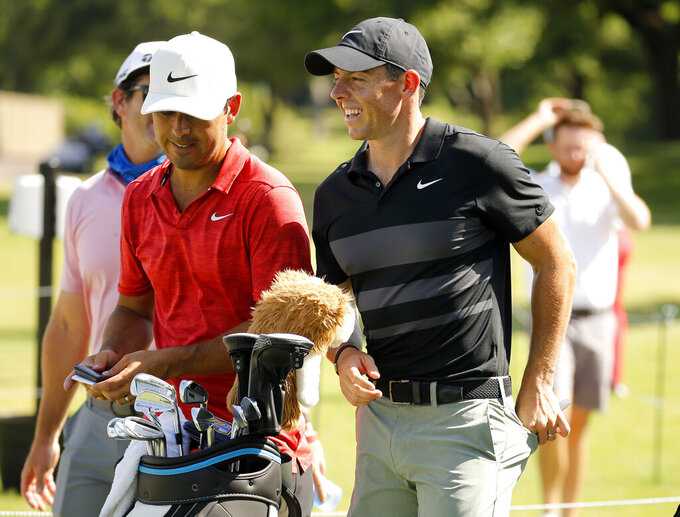 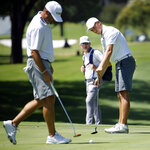 FORT WORTH, Texas (AP) — CBS Sports says it was more aggressive in trying to get players to wear microphones on the PGA Tour, and it appears to have at least one volunteer for the Charles Schwab Challenge.

Justin Thomas is opposed to the idea. Jordan Spieth wants to see how it goes before deciding, though he said one player in his group will be wearing a mic at Colonial. Spieth is playing with Thomas and Rickie Fowler.

In a conference call leading up to the PGA Tour's return, CBS laid out plans to have players speak briefly to a camera set up near a tee during the round and to get more players to wear mics during competition.

Mics are typical in exhibitions, like the charity matches last month. Players generally have resisted wearing mics over the years, and there still are those who aren't interested.

“That's not me,” Thomas said, adding that his conversation with caddie Jimmy Johnson and other players in his group “is none of anybody's business, no offense.”

Plus, he figures the boom mics on the course might pick up what he says, sometimes to his detriment.

“If I want somebody to know what I say, I'll say it in a press conference, I'll say it in an interview or put it out on social media, whatever it is," Thomas said. “But I personally am not one that would care to get mic'd out there.”

Jon Rahm could barely stifle a laugh. His emotions can be strong enough that they don't need words, and he often vents to himself to clear the air. But to have that on TV?

“You're asking me?” he said. “Honestly, I see the point, and I think people expect us to talk about much more interesting things than what we really do, so I don’t think it would be as entertaining as people think. Now, selfishly, because of who I am and I know how I am on the golf course, I wouldn’t support it, just because they might need a 20-, 30-second difference from live — might be a little bit delayed."

Spieth wonders if the mic would be a distraction to the game, though he sees the merit, especially in the first month or so on the PGA Tour without spectators.

“I also see what an advantage it could have for the game if you're able to mic some guys up, especially given there's no crowd noise, so you get a little extra commentary from the players,” he said. “For me, I'd probably be quieter than I normally am if I'm mic'd up so I don't keep on rambling, which might be a good thing for me.”

PGA Tour Commissioner Jay Monahan had gone 13 years since making a hole-in-one. Not only did his drought end while he was trying to put together the tour schedule during a pandemic, he made two in a span of six holes.

Monahan urged people when golf shut down to support the game by playing. One Sunday afternoon on the TPC Sawgrass, he made an ace on the island-green 17th hole. Three days later, Monahan’s brother was in town, and so after another conference call with his staff, he headed out to the back nine of the Stadium Course to join him. On the 13th hole, he made another hole-in-one.

That was his fifth hole-in-one. The last one before the pair? Monahan had to think. “What year did the Patriots lose the first Super Bowl to the Giants?” said Monahan, a New England native. Turns out it was 2007 at Desert Mountain in Arizona.

These aces were different from the other three in one regard.

“Both balls came to rest on top of Styrofoam,” he said.

The LPGA Tour is still six weeks away before resuming its schedule, but two of its members had that winning feeling last week in state opens against solid competition.

Kupcho, a Colorado native, won $50,000. She played only three LPGA events last year as a rookie in which she earned more, the biggest for $290,778 for her runner-up finish at the Evian Championship.

It was her first professional victory.

Sungjae Im was playing golf at the TPC Tampa Bay during the COVID-19 shutdown when another player on the course recognized him and asked for a photo.

It was Hyun-jin Ryu, the South Korean lefty who starred for the Los Angeles Dodgers until signing as a free agent with the Toronto Blue Jays.

“I thought it was really cool that such an accomplished athlete and a mega star in South Korea — and here, as well — recognized me and wanted to take a picture with me,” Im said. “He didn’t really give me any advice, but we did talk and it was very cool getting to meet him.”

Im was a top performer in the Presidents Cup, won the Honda Classic and is leading the FedEx Cup standings.

Jimmy Walker once switched to a 43-inch driver to help with accuracy. He returns to competition this week with another throwback. Walker will be the first player in six years to use a driver with a steel shaft.

“It all started a couple of months ago,” Walker said. “We got home and there was nothing to do so I got out my original Titleist 970 fairway metal, started hitting it and was blown away by how well it worked. I remember it was the first club I ever had built by Titleist when I qualified for the Byron Nelson as an amateur in 2001. It was the first PGA Tour event I ever played. I had that club in the bag for the longest time.”

He called J.J. VanWezenbeeck at Titleist with the odd request, a box of shafts was found collecting dust and Walker received first a fairway metal and then the driver.

Augusta National has acquired a 169,000-square-foot shopping center for $26 million, which The Augusta Chronicle reports is the club's most expensive real estate purchase. The shopping center is across from Washington Road from the club's northwest boundary. The newspaper says Augusta National, through affiliated companies, has acquired more than 110 acres of property surrounding the club in the last 20 years. ... Jordan Spieth has a new look on his golf bag for the next two weeks — purple in tone with “HBO MAX,” the live streaming service purchased by AT&T, with whom Spieth has a longtime endorsement. ... Ryan Palmer is in the winner's category when it comes to the draw and when he tees off. As a member at Colonial, he was put in the first group so he could hit the opening tee shot.

Colin Morikawa has played 21 PGA Tour events without missing a cut, one as an amateur. He is in the field at Colonial.

“Everyone is going to try to find the worst in everything, and the best we handle ourselves in this situation, the least we’ll hear about that.” — Harold Varner III on the PGA Tour returning following the COVID-19 shutdown.