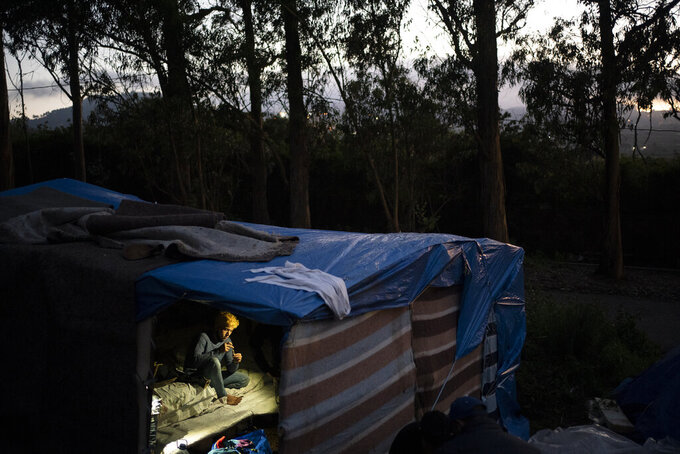 A migrant rests in Las Raices camp in San Cristobal de la Laguna, in the Canary Island of Tenerife, Spain, Wednesday, March 17, 2021. Several thousand migrants have arrived on the Spanish archipelago in the first months of 2021. Due to the terrible living conditions and the poor quality of food and water at the Las Raices camp, some migrants have decided to leave the camp and sleep in shacks in a nearby forest instead. (AP Photo/Joan Mateu)

SAN CRISTOBAL DE LA LAGUNA, Spain (AP) — While Spain has criticized Europe for not sharing responsibilities on migration, the country is finding itself under fire from migrants, local officials and human rights groups on the Canary Islands, where thousands who made hazardous sea crossings from Africa say they are stuck in inadequate camps.

More than 23,000 people from Morocco and West Africa arrived on the resort archipelago in the past year as authorities cracked down on previously popular routes on the Mediterranean. Spain has sought to keep what it sees as economic migrants, mainly from Morocco and Senegal, from continuing their journeys to the mainland by stopping them from boarding planes and ferries, while allowing through potential asylum-seekers and the most vulnerable.

When existing reception centers on the islands filled up, the government put up to 8,000 people in tourist hotels left empty by the coronavirus pandemic and built six large temporary camps to house 6,300.

The largest of these on Tenerife is Las Raices, located in San Cristobal de La Laguna, at the foot of a mountain on the volcanic island. Built with European Union funds, it can hold up to 2,400 in its rows of white tents.

Problems have plagued the camp since it opened, with complaints that it is cold and crowded, lacks adequate hot water and serves inedible food. Police detained several residents this month amid tensions over food. Some have decided to leave the camp to sleep in shacks in a nearby forest.

Papa Seck, a Senegalese fisherman who was transferred to the camp a month ago, fled his hometown of Joal-Fadiouth in October because he could no longer make a living due to overfished waters.

“The ocean is dead. We have nothing left,” the 30-year-old told The Associated Press, adding that he sold many of his possessions — including his pirogue, or long canoe — to seek a new life in Spain. His two-week crossing was arduous, he said, and several of the 140 passengers died of thirst and hunger before landing on the island of El Hierro in the Canaries.

About 23,000 arrived in the islands in 2020, up 750% from the year before, and at least 849 people died or disappeared on the way, according to the U.N. migration agency. The Atlantic route regained popularity after North African countries stepped up border controls and interceptions in the Mediterranean with support from the EU.

When Seck and those with him landed, they were tested for the coronavirus and quarantined before being moved to reception centers or hotels, and then to Las Raices. While nothing compares to their dangerous crossing, Seck said life in the camp has been difficult and he is frustrated he cannot continue on to continental Europe.

The camp's larger tents can hold up to 64 people but are divided into smaller sections, according to Accem, a nongovernmental organization contracted by the government to run the facility. The camp's occupancy is at just over 50% of its maximum capacity, the group said.

Even with the subdivisions, Seck said: “Twenty-four people in a tent is horrible.”

More people are expected to be moved into the camp, and it shouldn’t be long before it fills up.

José Luis Escrivá, Spain’s minister of inclusion, social security and migration, said more than 1,000 migrants who are still in island hotels will move to the camps by the end of this month.

For many in Las Raices, it is hard to imagine what more people will mean, especially with already hour-long waits at dawn for the showers. The migrants said the warm water quickly turns cold.

Accem acknowledged that one of two water heaters in the camp was broken and was being repaired.

Food was the biggest complaint. Seck said they were served a kind of potato broth. Accem admitted “the quality and quantity of the food provided needs improving,” and has told the government ministry.

But Escrivá vehemently denied that living conditions at the new camps were poor and rejected allegations the food was inadequate.

“That is false, simply false,” he told lawmakers recently at a hearing on his management of migrants in the Canaries.

Dozens of young men — mostly from Morocco — have moved to the outskirts of Las Raices, building makeshift shelters of tree branches, cardboard and plastic.

Roberto Mesa, a member of a migrant support group in Tenerife, criticized Spain’s decision to hold them on the islands, saying they are kept out of sight of the rest of the population.

“These people are not going to leave the Canary Islands (for Europe), and these macro-centers have been prepared … because these places are not very visible to the population. This way they cannot see what is happening here,” said Mesa, whose group provides migrants with food, clothes and other services, including legal help for those seeking asylum and Spanish lessons.

José Manuel Bermúdez, the mayor of Santa Cruz de Tenerife and an opposition lawmaker who visited the camp, called for its immediate closure because it was "an offense to Spain, and I’m ashamed it is happening on our islands.”

“There is no legal reason to stop these people from continuing their journey to other parts of the Spanish territory or relocate them to other regions with more humane conditions," he tweeted.

Escrivá, the migration minister, questioned the migrants’ decision to sleep in the streets rather than the camp, saying they were “induced by certain organizations to put up a show,” amid heightened expectations of a better life in Europe, when many of them faced a return to their homelands.

Spain has bilateral agreements with African nations to eventually return migrants to their countries of origin or those they passed through.

Spain, Greece, Italy, Malta and Cyprus have pressed for the new European Migration and Asylum Pact to force other EU members to establish an equitable relocation system and a centralized return mechanism.

Estrella Galán, head of Spain’s Commission to Help Refugees, pointed out the contradiction in the government’s public comments and policies at a recent hearing in Brussels of the European Parliament Committee on Civil Liberties, Justice and Home Affairs.

“We are surprised because we are seeing that in the Canaries the same policies that Spain rejected so strongly are now being applied. It is true that the Canaries are not Lesbos, they are not Lampedusa, but the politics of policing and blocking are the same,” she said, referring to islands housing migrants in Greece and Italy

For Seck, a return to Senegal isn't an option.

“We prefer to die rather than return,” he said.