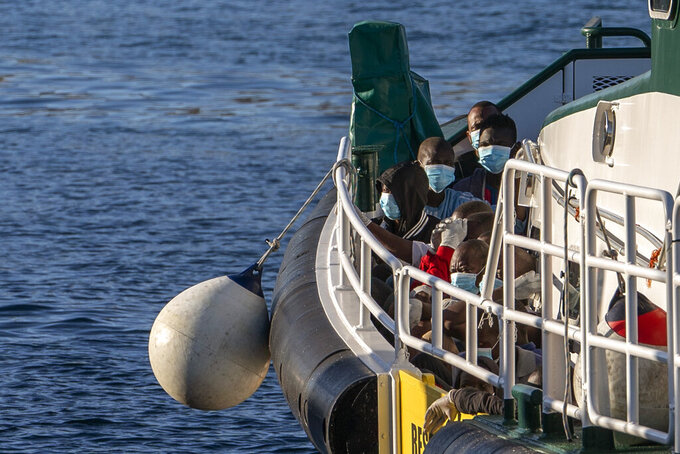 Migrants wearing face masks sit on the deck of a police rescue boat as they arrive at the Arguineguin port in Gran Canaria island, Spain, after being rescued in the Atlantic Ocean on Thursday, Aug. 20, 2020. More than 250 people are known to have died or gone missing in the Atlantic route so far this year. (AP Photo/Emilio Morenatti)

FUERTEVENTURA, Spain (AP) — Migrants are increasingly crossing a treacherous part of the Atlantic Ocean to reach the Canary Islands, a Spanish archipelago near West Africa, in what has become one of the most dangerous routes to European territory.

About 4,000 people have survived the perilous journey this year. More than 250 others have died or gone missing, according to the International Organization for Migration. That’s already more than the number of people who perished trying to cross the Western Mediterranean in all of last year.

In the week that The Associated Press spent in the Canary Islands to report this story, at least 20 bodies were recovered.

The increase in traffic to the Canaries comes after the European Union funded Morocco in 2019 to stop migrants from reaching southern Spain via the Mediterranean Sea. While arrivals to mainland Spain decreased by 50% compared to the same period last year, landings in the Canary Islands have increased by 550%. In August alone there were more than 850 arrivals by sea to the Canaries, according to an AP tally of numbers released by Spain’s Interior Ministry and reports by local media and NGOs.

Hawa Diabaté was fleeing her native Ivory Coast by boat with her 2-year-old daughter, Noura, to what she believed was continental Europe. The only person who wasn’t crying on the boat was Noura.

Unlike the 60 adults on board, only Noura was oblivious to the risks of crossing the open waters of the Atlantic Ocean in an overcrowded rubber dinghy.

On August 19, 15 lifeless Malians were spotted inside a wooden boat by a Spanish plane 148km, 92 miles from the island of Gran Canaria and towed back to port. At nightfall, workers pulled the bloated corpses, one by one, out of the boat with a crane. The next day, police collected what was left behind as evidence: a wallet, a dozen cell phones, windbreakers and waterproof boots.