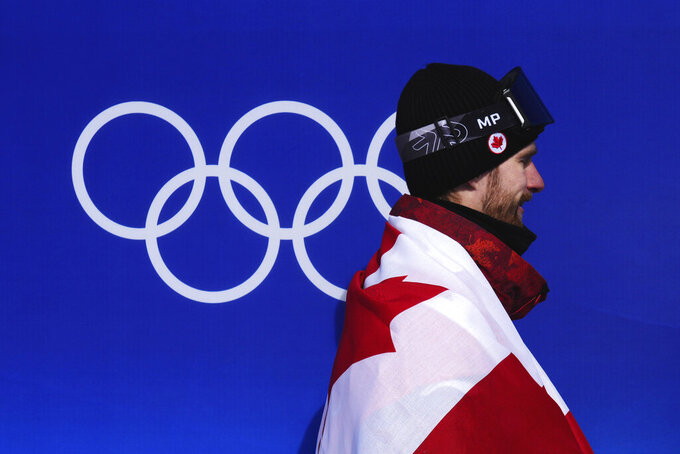 BEIJING (AP) — It was a miserable day on the mountains outside Beijing for American stars Mikaela Shiffrin and Red Gerard.

Shiffrin’s opening race in the Beijing Olympics ended quickly with a rare mistake and a rare DNF — Did Not Finish. Favored to defend her gold medal in the giant slalom, Shiffrin instead crashed out a few seconds and five gates into the race. She lost control coming around a left-turn gate and fell onto her hip on a course known as The Ice River at the Yanqing Alpine Skiing Center.

The missed gate meant she was done early in the opening run of the two-leg event.

While Shiffrin is expected to have four more chances to add to her collection of three Olympic medals, including two golds, she said Monday’s wipeout will always stick with her.

“I won’t ever get over this,” Shiffrin said. “I’ve never gotten over any.”

Her stunning exit was her first DNF in a GS in more than four years, a streak of 30 races. Her last one was three weeks before she won the gold at the 2018 Pyeongchang Games.

“That’s what drives me to try to keep working and improving, so I can try to make it (so) those things don’t happen,” she said. “But sometimes they still do happen and, unfortunately, it happened today. I felt like there was a lot to look forward to, but, well, now we need to reset.”

Shiffrin plans to race again Wednesday in the slalom, which she won as an 18-year-old at the 2014 Sochi Games. It’ll be her next chance to become the first Alpine ski racer from the United States to win three Olympic golds across a career.

“I’m not going to cry about this because that’s just wasting energy,” she said.

On the slopestyle course, Gerard not only failed to defend his gold medal, but he was knocked off the podium entirely. A run by Canadian rival Mark McMorris dropped Gerard into fourth.

“There’s nothing you can really complain about and I don’t want to be a judge or anything,” Gerard said. “There were a lot of landed runs out there, and it’s hard. But yeah, I would’ve liked to have been up there for sure.”

Three years after feeling a cancerous lump in his neck, Canadian snowboarder Max Parrot completed an inspiring comeback by winning the gold medal in men’s slopestyle on a course that includes replicas of the Great Wall of China.

Parrot’s victory run was highlighted by his second jump, when he approached the kicker from an angle instead of straight on — the only competitor to do so — and flipped backward for 1440 degrees of spin, then stomped the landing.

“By far, the biggest run of my entire career,” he said.

Just like his battle back from being diagnosed with Hodgkin lymphoma 10 months after winning the silver medal at the 2018 Pyeongchang Olympics. He underwent 12 chemotherapy treatments during the span of six months.

“I had to stop everything to fight,” he said. “I went through hell. It was the first time I ever put my snowboard in the closet. I felt like a lion in a cage.”

Su Yiming of China earned the silver and Mark McMorris of Canada took the bronze.

McMorris was happy for his countryman.

“Max beat (expletive) cancer and it’s pretty sick to see him do well,” McMorris said. “And he didn’t come to any slopestyle this year. It’s not his strong suit. Big air is, and he just won slopestyle today.”

Beat Feuz of Switzerland won the gold medal in the men’s downhill, the one major victory that was missing from his impressive career accomplishments.

“I can’t think of anything more beautiful than flying home with a gold medal around my neck,” said Feuz, the four-time reigning World Cup downhill champion who won the silver medal in super-G and the bronze in downhill at the 2018 Olympics.

Dutch speedskater Ireen Wüst became the first athlete to win individual gold medals at five different Olympics when she took the 1,500 meters in an Olympic-record time of 1 minute, 53.28 seconds at the Ice Ribbon oval.

She now has six gold medals, five in individual events that are evenly distributed over each of the Olympics she’s competed in. She’s the most- decorated speedskater in Winter Olympic history with 12 medals.

“I don’t know what it is. I just see the rings and something magical happens,” said the 35-year-old Wüst, who plans to retire after the Beijing Games.

Ren Ziwei of China survived a wild finish to win the men’s 1,000 meters in short track speedskating. Liu Shaolin Sandor of Hungary crossed the line first but was penalized twice and earned a yellow card. That elevated Ren, who crossed second, to the gold medal.

Liu appeared to bump Ren in taking the lead late in the race. Ren grabbed Liu approaching the finish line. Liu still managed to cross first before going down. The referee assessed the penalties to Liu.

Earlier, Arianna Fontana of Italy burnished her legacy as short track’s most decorated skater with her second Olympic medal in Beijing, the gold in the women’s 500. She let out a yell as she crossed the line to earn her 10th career medal.