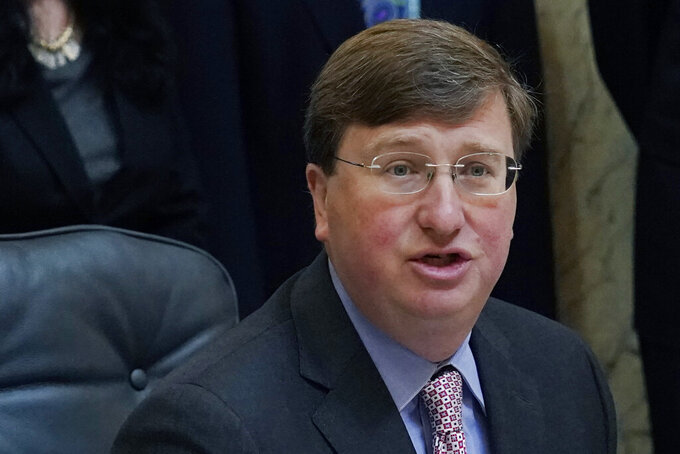 FILE - In this March 11, 2021, file photo, Mississippi Gov. Tate Reeves speaks with reporters after signing a bill at the Capitol in Jackson, Miss. A new Mississippi law will make more inmates eligible for the possibility of parole. Gov. Reeves signed Senate Bill 2795 on Thursday, April 22, 2021, and it becomes law on July 1. (AP Photo/Rogelio V. Solis, File)

JACKSON, Miss. (AP) — Mississippi legislators are not in session now, so it could be months before they start deciding how to spend $1.8 billion in the latest round of pandemic relief from the federal government.

Mississippi will receive part of the money this year and the rest next year.

The U.S. Treasury Department on Monday released details about how much money state and local governments are receiving under the American Rescue Plan signed into law by President Joe Biden, and how the money may be spent.

The Treasury Department said state and local governments may use the federal money for public health, including efforts to mitigate the spread of COVID-19. They may use it to address economic problems that the pandemic has caused for workers, households, small businesses, industries and government. They also may use some of the money to replace tax revenue that was lost because of the pandemic and to provide extra pay for essential workers.

Other acceptable uses are for improvements to water and sewer systems and expansion of broadband access, the Treasury Department said.

States are not allowed to use the money to cut taxes, shore up pension funds or rainy day funds, make payments on long-term debt or pay off legal settlements, under the Treasury rules.

Some states can receive their full share of federal relief money this year and others will receive it in two payments a year apart. The 20 states receiving the full share this year have unemployment rates at least 2 percentage points higher now than in February 2020. Mississippi is among the 30 states with an unemployment rate that has not climbed to that level, so it will receive its money over two years.

Mississippi legislators' next regular session begins in January. Republican Gov. Tate Reeves could call them into special session, if he wants, to decide how to spend the federal money.

Hopson, a Republican from Vicksburg, said Monday that he does not know whether the governor will call a special session.

Payments to cities and counties will be split into two batches — some this year and some next year.

In addition to the $1.8 billion that is going to Mississippi state government, Mississippi is receiving $268 million that will be split among cities and towns with fewer than 50,000 residents. During their 2021 session, legislators created a state fund where this money will be sent. The state will distribute the money to those communities.

Counties are receiving money based on population. Mississippi’s largest county, Hinds, is receiving $45 million. The only Mississippi counties receiving less than $1 million are both sparsely populated. Issaquena will receive $257,754 and Sharkey, $839,304.