Mississippi reckons with ending pay boost for the unemployed 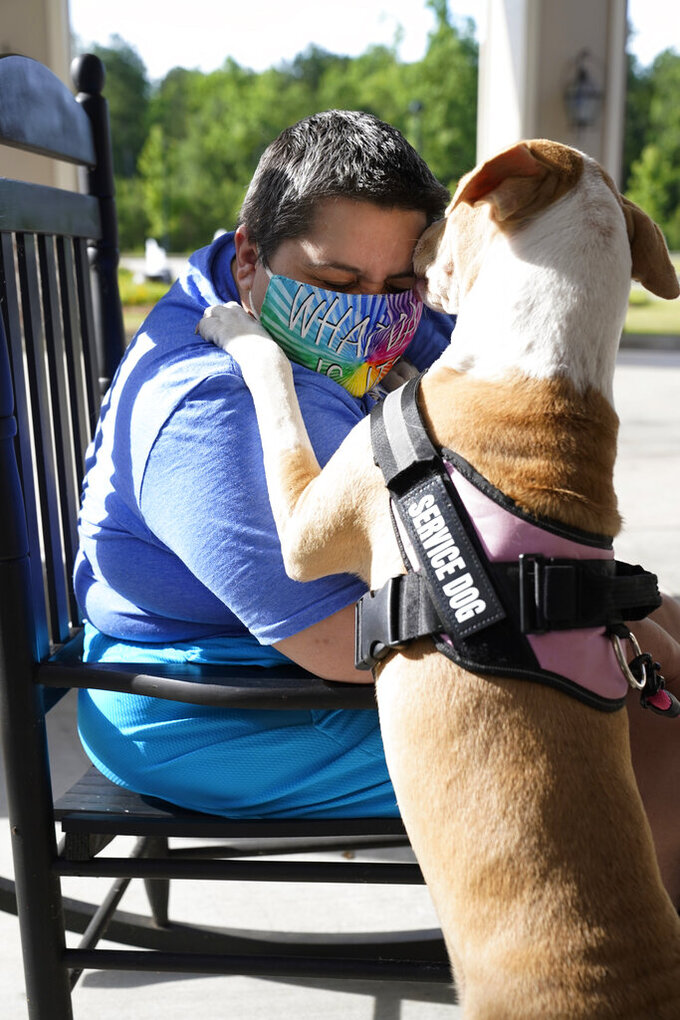 Katrina Folks hugs her service dog, Princess, and speaks about her efforts to find work since losing her job in September because of the coronavirus pandemic, Friday, May 28, 2021, in Hattiesburg, Miss. Folks, the mother of an 11-year old son, used to do data entry at a law firm, but she has health issues that require her to work from home. Mississippi Gov. Tate Reeves announced May 10 that the state will opt out of the $300-a-week federal supplement for people who lost their jobs during the COVID-19 pandemic, as well as other programs that offered extended support for the unemployed, actions, directly affecting Folks. (AP Photo/Rogelio V. Solis) 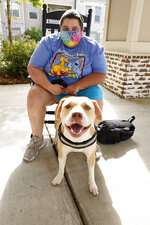 JACKSON, Miss. (AP) — Katrina Folks says she has tried everything she can think of to find work since losing her job in September because of the coronavirus pandemic.

The 39-year-old mother from Hattiesburg used to do data entry at a law firm, and she has health issues that require her to work from home.

She said she has been doing three interviews a week and bought WiFi and a computer to try to make herself a stronger job candidate. But she hasn't been able to find work that will accommodate her weekly doctor’s appointments.

“Every time I put in an application and they call me, I seem to hit a brick wall,” she said.

Mississippi Gov. Tate Reeves announced May 10 that Mississippi will opt out of the $300-a-week federal supplement for people who lost their jobs during the COVID-19 pandemic, as well as other programs that offered extended support for the unemployed.

At least 24 Republican-led states in the U.S. have now decided to end federal unemployment benefits early, months before they were set to expire in September 2021. That means millions of people will lose support. People in Mississippi, one of the poorest states in the country with the lowest-paying jobs, will be among the first to lose benefits.

Folks said the governor's decision means her current weekly check of $491 will go down to nothing.

About 90,000 people were receiving the $300 unemployment supplement for reasons related to the coronavirus pandemic at the start of May, according to the Mississippi Department of Employment Security.

Reeves, a Republican, said he made the decision to stop accepting the federal supplement after consulting with business owners and employees.

Even though most capacity restrictions and other coronavirus regulations have been lifted for businesses, they still aren't able to recover fully because they can't find employees, said Erma Cook, director of the office of re-employment assistance at Mississippi Department of Employment Security.

“Employers are reaching out to us asking for additional assistance because they have work available, but they did not have individuals coming in to interview for positions,” Cook said. "They don’t have the workers to provide the service that they offer."

The department has taken to social media in recent weeks to encourage businesses to report applicants who refuse job offers while still collecting unemployment. The state set up an online portal where employers can submit applicants for investigation.

Cook says reports have surged since the state began pushing employers to make them.

Charita McCarrol is human resources manager at Great Southern Industries, a packaging company in Jackson. She said she has used the state's portal to make reports and she sees a lot of people abusing the system.

“You can’t get people to come to work," McCarrol said. “It has been an absolute nightmare in the world of staffing agencies."

McCarrol's company has about 69 of its 89 positions filled. Sometimes, it can't run all of its machines because it doesn't have enough employees, or it has to shut down a shift. Supervisors are running machines and driving forklifts because they can't find people to fill the roles.

At the Half Shell Oyster House seafood restaurant in Flowood, manager Jalen Loggins said he has had similar experiences. The restaurant is hiring for all positions.

“We’ve had people show up to orientation, do the 2 1/2 hour orientation, and then never show back up," he said.

Like many businesses, Half Shell started an incentive program, offering a $300 sign-on bonus and another $300 after three months.

Many places are taking creative approaches to attract employees.

Workers are demanding more than they were before the pandemic, employers say.

Matt Roberts, general manager at Shaggy’s Biloxi Beach, said the restaurant is fully staffed since it raised pay to a guaranteed $15 an hour for every full-time position, adding medical, vision and dental benefits. The Biloxi restaurant is one of five Shaggy's locations and has about 90 employees.

“There’s a lot of coast restaurants that are having to close on certain days of the week because they don’t have enough employees that want to get paid, you know, $7.25 an hour to cook in the kitchen,” Roberts said.

He said he wants employees to know they are valued.

“Have a little empathy, you know?" Roberts said. "We just want to make it so employees have a livable wage where they not only just take care of themselves, they can take care of their families."

Folks said she's losing hope of finding a job before the June 12 deadline. Tasks like buying clothes for her 11-year-old son have become a source of stress.

"I’m literally having to go to churches and beg them to help," she said. “It's embarrassing, I’ve worked my whole life, and now I have to ask people for help, and I’m not one to do that.”

Folks said there's a misconception that people still on unemployment from the pandemic are lazy, and that they don't want to work. She said that's not true for her.

“I’m just stuck between a rock and a hard place right now," Folks said. "It feels like there's no way to get me out of it."