A mix of hope and dismay as religious leaders assess Biden 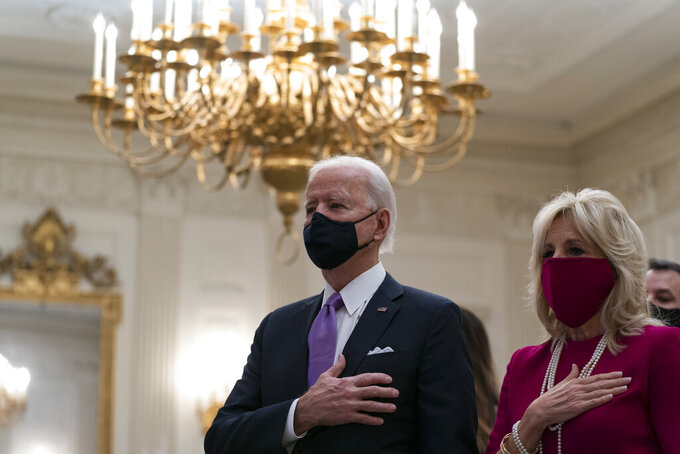 FILE- In this Thursday, Jan. 21, 2021 fiel photo, President Joe Biden, accompanied by first lady Jill Biden, places his hand over his heart during a performance of the national anthem, during a virtual Presidential Inaugural Prayer Service in the State Dinning Room of the White House, in Washington. Donald Trump's departure from the White House and the start of Biden’s presidency have stirred new hopes among many religious leaders in the United States, while causing dismay among others. For leaders of the two largest Christian denominations — the Roman Catholic Church and the Southern Baptist Convention — the paramount concern about the Biden administration is its strong support for abortion rights. (AP Photo/Alex Brandon, File)

Donald Trump's departure from the White House and the start of Joe Biden’s presidency have stirred new hopes among many religious leaders in the United States, while causing dismay among others.

Here’s a look at some of the issues that major faiths will be grappling with as the new administration takes shape.

For leaders of the two largest Christian denominations in the U.S. — the Roman Catholic Church and the Southern Baptist Convention — the paramount concern about the Biden administration is its strong support for abortion rights.

Biden, a practicing Catholic, already has rolled back some Trump policies aimed at curbing abortion access. On Jan. 22, the 48th anniversary of the Supreme Court decision establishing a nationwide right to abortion, Biden and Vice President Kamala Harris said they would seek to enshrine that right into federal law to protect it from court challenges.

That stance was assailed by Archbishop Joseph Naumann of Kansas City, Kansas, who chairs the U.S. Conference of Catholic Bishops’ Committee on Pro-Life Activities.

“It is deeply disturbing and tragic that any president would praise and commit to codifying a Supreme Court ruling that denies unborn children their most basic human and civil right,” he said.

The Rev. Albert Mohler, president of the Southern Baptist Theological Seminary, said in a recent radio broadcast that Biden "is entirely, unquestionably sold out to the abortion rights movement.”

Clergy of other denominations who support abortion rights, including from mainline Protestant churches and the Reform and Conservative branches of Judaism, will likely embrace the administration’s efforts to expand access.

“We’re not pro-choice in spite of our faith — we’re pro-choice because of our faith,” said the Very Rev. Katherine Hancock Ragsdale, an Episcopal priest and president of the National Abortion Federation.

They say such measures — some already taken and others expected later — could infringe on religious freedom for faiths that oppose same-sex marriage and question the inclusion of gender identity in nondiscrimination policies.

In a recent statement, five prominent bishops warned about “the imposition of new attitudes and false theories on human sexuality which can produce social harms.”

Massimo Faggioli, a Villanova University theology professor who authored a book about Biden and U.S. Catholicism, said these issues will fuel serious tensions. The bishops, he said, fear Catholic institutions will lose their right to provide government-subsidized social services if they do not abide by certain nondiscriminatory policies.

Francis DeBernardo of New Ways Ministry, which advocates for LGBTQ Catholics, predicted that Biden will find a balance even as he bolsters LBGTQ rights.

“As a person deeply committed to his church, he is not likely to trample on the religious liberties of faith institutions,” DeBernardo said.

Leaders of The Church of Jesus Christ of Latter-day Saints, another conservative denomination, may be relieved at Trump’s departure and willing to work with Biden on some issues, said Matthew Bowman, chair of Mormon studies at Claremont Graduate University in California.

Bowman said they would likely ask that any new nondiscrimination initiatives provide expansive exemptions for religious institutions, however, including faith-based schools such as Brigham Young University.

Faith-based groups have called for raising the annual cap on refugee admissions to the U.S. and relief for beneficiaries of the Deferred Action for Childhood Arrivals program, or DACA, which shields some young immigrants from deportation.

Evangelical organizations that assist refugees offered advance praise for Biden’s expected raising of the admissions ceiling after what one called “numerous harmful changes” under Trump'.

Leaders of the Catholic bishops’ conference cheered Biden for shoring up DACA on his first day in office, while urging him to go further by creating a path to citizenship for its beneficiaries as a “first step” toward a broader overhaul.

More action is set to come from the White House as soon as this week, and lawmakers also vow to pursue it through legislation. Whether religious groups can maintain their support for future immigration measures may depend on the specifics.

Many denominations in the U.S. have committed to combating racial injustice. Their leaders were critical of Trump’s divisive rhetoric and expect Biden and Harris to make substantive efforts to reduce racial inequality.

“It’s my hope that the administration will do everything they can to promote racial justice, truth-telling and healing,” said Michael Curry, the first African American to serve as presiding bishop of the Episcopal Church. He added that criminal justice and education are areas where racial disparities must be addressed.

The Rev. Terri Hord Owens, the first African American to lead the Disciples of Christ, was encouraged by the Biden transition team’s extensive outreach to faith leaders and hopes the administration can address economic inequality in ways that will simultaneously combat racial injustice.

The chairman of the Catholic bishops’ Committee on Racism, Bishop Shelton Fabre of the Houma-Thibodaux diocese in Louisiana, said differences with Biden over abortion won’t prevent cooperation on race-related matters.

“While we have strong disagreements regarding abortion and other issues … I nonetheless look forward to working together to address racism as it impacts society and individuals,” Fabre said.

The Rev. Russell Moore, head of the Southern Baptists’ public policy arm, acknowledged that some white evangelicals don’t consider racial inequality a high-priority issue. But he argued that it's crucial to develop a “Christian vision of racial justice” and said an increasing number of multiethnic evangelical churches share his view.

The Jan. 6 insurrection at the U.S. Capitol lent fresh urgency to the debate over combatting domestic security threats, including hate crimes targeting houses of worship in recent years.

Faith-based groups such as the Jewish Orthodox Union lauded an increase in federal grant money for protection at religious institutions, aid that’s distributed through a program Biden vows to strengthen.

But discussion of expanding legal authority to prosecute alleged domestic terrorists has raised alarms among civil rights groups, including Muslim organizations that fear it could be unduly deployed against minority communities.

Among the 135 groups signing a letter last month opposing establishment of a new domestic terrorism charge or “other expansion of existing terrorism-related authorities” were six Muslim American groups, three Jewish American groups, and the United Church of Christ.

Religious leaders have played a central role in aiding communities wracked by the pandemic, and their representatives have stepped forward in recent days to seek more help from Washington.

The Circle of Protection, an influential alliance of Christian leaders, wrote to the White House and Congress last week to offer proposals for prioritization in any future pandemic relief package.

The Circle urged that any direct relief payments be focused on people “beneath or near the poverty line” and that the package include boosts to nutrition aid and the Earned Income Tax Credit and help for fighting the coronavirus abroad in poor nations.