Mize 87 yards shorter than DeChambeau and has the same score 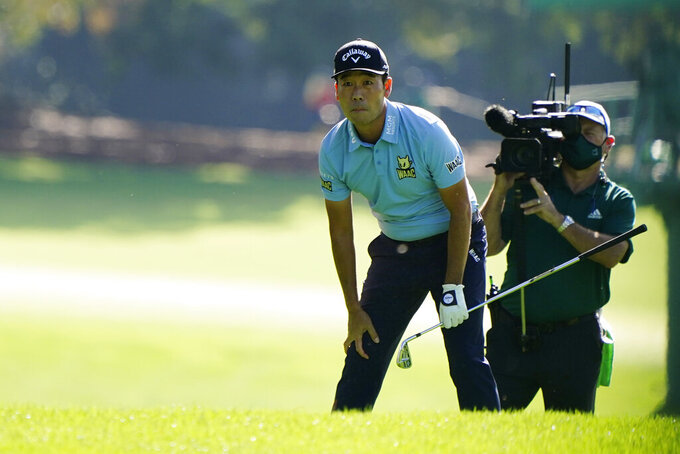 Kevin Na looks after his shot on the first fairway during the first round of the Masters golf tournament Thursday, Nov. 12, 2020, in Augusta, Ga. (AP Photo/Matt Slocum)

AUGUSTA, Ga. (AP) — Larry Mize is 33 years removed from the Masters victory that allows him to play as long as he likes. He is 62, and his average distance off the tee on the two measured drives Thursday was a paltry 247.4 yards.

Bryson DeChambeau can hit an iron that far. In fact, DeChambeau’s average driving distance was 334.6 yards.

It was a thrill for Mize, especially after making three straight birdies early in his round and looking up to see his name on the leaderboard.

“I did happen to see that,” Mize said. “Wow, that’s kind of cool. I’d like to be there more often. It’s always fun to see your name up on the leaderboard here. I’m sorry I couldn’t keep it. But it was nice to come back and finish really well on the back nine. I played really solid coming in and really felt good.”

It was the first time he broke par at the Masters since opening with a 67 in 2009. It will be tough to keep that up, and Mize is aware of that.

For one day, at least, it was a thrill. And it could have been better, or at least louder.

“The fans are such a big part of this place,” he said. “To not have any roars out there today and no patrons, no fans, it is different. But it’s still special. It’s still awesome to be here. The course is beautiful. Fans or not, it’s awesome to be here playing.”

Sure, it would have been fun to make his six birdies before a crowd that remembers his 1987 Masters victory. Then again, it would be hard to replicate that day. He became the first Augusta native to win a green jacket when he holed a 140-foot chip at No. 11 in the second hole of a playoff to beat Greg Norman.

One week after Tiger Woods won the Masters, C.T. Pan captured his first PGA Tour title by winning the RBC Heritage at Hilton Head. That qualified him for his first Masters, and he couldn't wait.

And then he had to wait longer than anyone in Masters history to hit his first tee shot.

The COVID-19 pandemic shut down golf a month before the Masters, which was then postponed until November. That meant 571 days from the time Pan qualified until he heard, “C.T. Pan now driving. Fore, please.”

“It was definitely worth the wait,” Pan said after opening with a 2-under 70. “And it was a long, long wait, trust me. I've been imagining this day since I was 5. So that has been a long wait.”

It gets better. Thursday was his 29th birthday.

“And I played solid, too,” he said. “First round at Augusta, I posted a low number. So that's good.”

With only a handful of spectators allowed at the Masters, it’s easy to hear what the players are saying.

Kevin Na came through loud and clear during a frustrating seventh hole.

After a booming drive, Na misfired on his approach shot and watched the ball stop at the edge of the green.

“You’ve got to be kidding me!” he bellowed.

Na needed three putts to get down, settling for a bogey.

“Three-putt, three-putt, thank you,” he muttered, apparently referring to a similar misadventure on the greens earlier in the round.

Na wound up shooting a 1-over 73, hardly an encouraging start in the favorable scoring conditions. Fifty of the 92 players were under par when the first wound was halted because of darkness.

Jack Nicklaus won more major tournaments than anyone in history, but he was known to be gracious in defeat as well.

So the six-time Masters champion was asked on Thursday what advice he would give to President Donald Trump, a friend, on losing his bid for re-election. The Republican incumbent has refused to concede the race or participate in the transition even though Democrat Joe Biden has won enough states to earn the majority of delegates to the electoral college.

Nicklaus, who met with the media after taking part in the honorary first tee shot ceremony at the Masters, declined to comment.

“I think I’ve said enough about that,” said Nicklaus, who endorsed Trump in the week before the election and said he had already voted for him. “I don’t think this is a place for politics.”

The Masters Club dinner Tuesday night has changed from when Gary Player first started going in 1962 as the defending champion. The idea of a champions' dinner came from Ben Hogan.

Player said he was sitting next to Hogan when Horton Smith, the first Masters champion in 1934, began passing a book around for all the champions to signed. Player signed it and passed it over to Hogan.

Hogan stood up and banged the book on the table.

“He said, ‘Who passed this book up here?’ Horton Smith said, ‘Ben, I did. I’ve got a junior at my club, and I want to encourage him,'” Player said. “He said, ‘Horton, this is the Masters Club, not some autograph session club. Don’t you ever do that again.’

“And now, you see at the dinner hundreds of flags being signed for all the different charities, which is marvelous."

Player said he doesn't think Hogan would even attend the dinner now, with all the flags being signed. Jack Nicklaus agreed that the dinner has become an “autograph session,” but he wouldn't go that far.

“I would say it would be different,” Nicklaus said. “But the Masters dinner is always great fun for all of us.”

Nicklaus said the turnout was as low as it has ever been because of the pandemic and the difficulty of traveling.