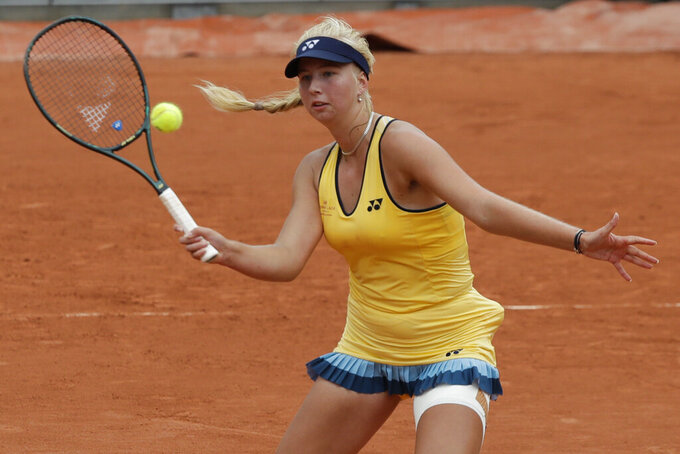 Denmark's Clara Tauson plays a shot against Jennifer Brady of the U.S. in the first round match of the French Open tennis tournament at the Roland Garros stadium in Paris, France, Tuesday, Sept. 29, 2020. (AP Photo/Alessandra Tarantino)

PARIS (AP) — Kristina Mladenovic's first match since her nightmarish end to the U.S. Open produced another collapse and a controversial umpire's call at the French Open on Tuesday.

The French player lost to Laura Siegemund of Germany 7-5, 6-3 after serving for the first set at 5-1.

Mladenovic was furious with chair umpire Eva Asderaki for not spotting a double bounce on set point. During a 10-stroke exchange, Mladenovic hit a drop shot that Siegemund ran for and got back over the net -- although a TV replay showed the ball bounced twice. Mladenovic slowed up, looked confused, and wound up touching the net, which automatically gave the point to Siegemund.

For Novak Djokovic, though, his first Grand Slam action since his disqualification at the U.S. Open went as smoothly as can be.

The top-ranked Serb, who is bidding for a second title here and an 18th major title overall, beat Mikael Ymer of Sweden 6-0, 6-2, 6-3 under a closed roof at Court Philippe Chatrier. The first set lasted just 20 minutes and Djokovic broke the 80th-ranked Ymer nine times overall.

Djokovic was defaulted from his fourth-round match at the U.S. Open this month for accidentally hitting a line judge in the throat with a ball hit in anger after dropping a game.

On Tuesday it was was Siegemund who faced questions of unsportsmanlike conduct for not acknowledging the double bounce that should have handed Mladenovic the first set.

“If she would have done it, she would have all my respect and be super fair play,” Mladenovic said. “But she’s not the one responsible. I think the chair umpire is the one that should be really focused on that call.”

Siegemund also said it wasn't up to her to make the call, and that she wasn't sure right away whether the ball had bounced twice.

“I can maybe understand a little bit that (Mladenovic) is getting at me, but I think she should get at the umpire. She had plenty of other opportunities,” she said. “I’m coming running full speed, if in that call I say ‘Oh, it was a double bounce,’ and later I see on the video it was not, I would be angry at myself.”

“It would be great and we’d avoid a sad scenario like I had today,” Mladenovic said.

It wasn't quite as sad as Flushing Meadows, though, where she served for the match at 6-1, 5-1 against Varvara Gracheva then lost a tiebreaker and lost 6-0 in the third set.

She called that the most painful loss of her career. Four days later, she was part of the top-seeded women’s doubles team dropped from the U.S. Open for having been potentially exposed to COVID-19.

Public health officials who oversaw her tournament hotel said she was at risk after playing cards in a group including Benoit Paire, the Frenchman removed after testing positive for the virus. She had to go into quarantine.

In other women's first-round matches, second-seeded Karolina Pliskova beat Mayar Sherif 6-7 (9), 6-2, 6-4. Sherif was the first Egyptian player to qualify for the main draw at Roland Garros.