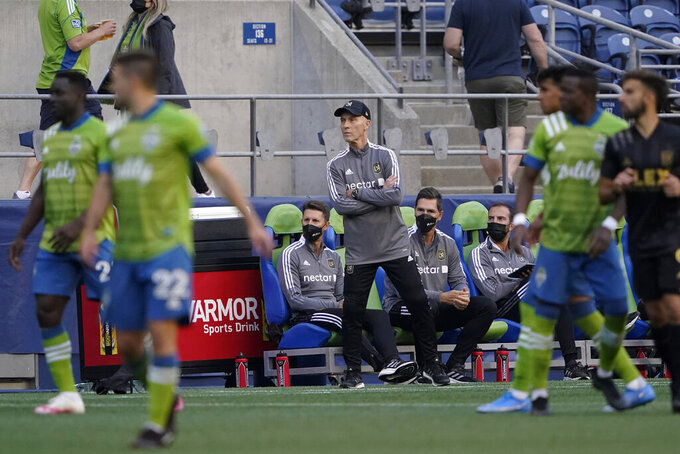 Los Angeles FC head coach Bob Bradley watches from the sideline during the second half of an MLS soccer match against the Seattle Sounders, Sunday, May 16, 2021, in Seattle. The Sounders won 2-0. (AP Photo/Ted S. Warren)

LOS ANGELES (AP) — It will take place more than a year later than originally scheduled, but a match between the top players in Major League Soccer and Mexico's Liga MX is on.

The two leagues announced Wednesday that the MLS All-Star Game will be played Aug. 25 at Banc of California Stadium, home of Los Angeles FC of the MLS.

The game was originally scheduled to take place last July 29 and coincide with MLS’s 25th season until the coronavirus pandemic curtailed those plans.

MLS Commissioner Don Garber said planning for the game did not intensify until the past month after both leagues were able to make sure the top players could participate, along with ensuring the game could be played in a full stadium. California stadiums and arenas are cleared to go to full capacity beginning Tuesday.

“There is a rivalry that exists between the United States and Mexico as it relates to soccer. The game the other night in Denver (the CONCACAF Nations League final) just adds to this rivalry,” Garber said.

The upcoming game represents a departure from the format for the past 15 MLS All-Star games that had the best players in the league facing European clubs. Los Angeles is a fitting location for the game — not only does it have one of the largest Latino populations in the world but it is a battleground for both leagues.

Garber noted the cooperation between both leagues is vital when it comes to improving the stature of CONCACAF on the world stage.

“To have our region become more important and influential in the football world, the two big leagues need to collaborate together,” he said. “The connection between our leagues and countries goes back to the start of MLS. For many years, we have been looking at ways to bring our leagues together to grow our fan bases and learn from each other.”

Mikel Arriola, who took over as Liga MX's executive president at the start of the year, said the game represents a good showcase for the league as its continues to navigate the challenges of playing during a pandemic.

“We’re excited to play here because of the full attendance due to the fact that your vaccination strategy is the best of the world,” he said. “This is a great opportunity for us in order to recover. And I think that we could normalize our operation around the fourth quarter of the year.”

The match will be broadcast in the U.S. on Fox Sports 1 and Univision and on ESPN throughout Mexico and Latin America.

This will be the second MLS All-Star Game in the Los Angeles area following a 3-1 win by the league’s All-Stars over Chivas in 2003 at the home of the LA Galaxy in Carson. The All-Star Game switched to an East vs. West format in 2004, then the following year to MLS playing a European club preparing for the start of its season.

Liga MX holds its Campeón de Campeones, matching the winners of its Apertura and Clausura split-season tournaments, and Supercopa MX in Carson as well as holding its season-ending awards ceremony in Los Angeles.

The All-Star Game should be a showcase for players from both leagues. LA Galaxy star Javier “Chicharito” Hernandez leads MLS with seven goals and LAFC's Carlos Vela was the league MVP two years ago.