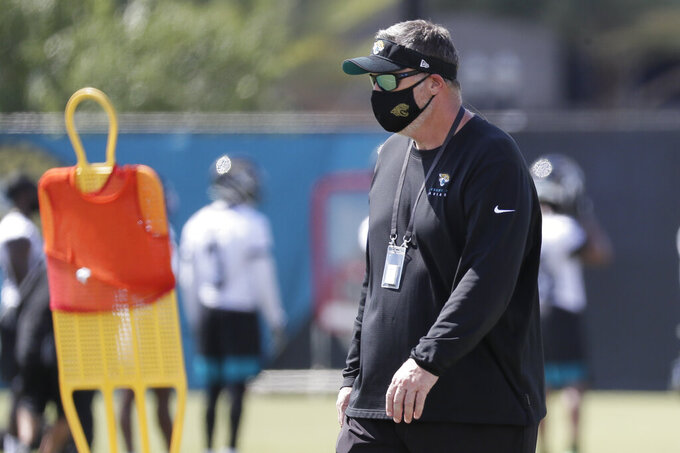 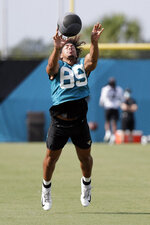 JACKSONVILLE, Fla. (AP) — Jacksonville Jaguars coach Doug Marrone should be used to this by now.

Marrone has endured a three-year run of daunting setbacks, a lengthy list that includes losing four left tackles, four tight ends and a starting receiver — most of them early — in 2018, and then losing his starting quarterback during the opening series last season.

Now, the Jaguars are without five defensive linemen before they even put on pads in training camp. Rodney Gunter, signed in free agency to replace five-time Pro Bowler Calais Campbell, became the latest and most significant missing defender.

Jacksonville placed Gunter on the reserve/retired list Monday, one day after he was forced to walk away from football because of an enlarged aorta. The team signed veteran defensive tackle Timmy Jernigan to help fill the void.

“It’s just an awful feeling, it really is,” Marrone said. “It’s just tough. … These are the things that are very difficult. Things come up that are out of your control and takes away what you love and what you want to do.”

Marrone offered Gunter a position on his staff once “this very tough period calms down.” Gunter signed a three-year, $18 million contract in free agency after spending his first five years in the league with Arizona.

“I told him, ‘Hey, get everything (settled). There’s a lot going on. We have all the support here for you. We don’t want you to feel like you’re left out alone,’” Marrone said. “That’s a credit to obviously (general manager) Dave (Caldwell) and Shad (Khan), ownership, to have that kind of understanding in a league at times that is business-oriented and, for lack of a better term, sometimes cutthroat.

“I feel proud that we’re doing the right thing.”

Marrone also announced Monday that tight end Josh Oliver broke a bone in his left foot while running a day earlier and will have surgery Tuesday. A third-round pick in 2019, Oliver missed 12 games as a rookie because of hamstring and back issues. He finished with three receptions for 15 yards.

“You just chalk it up to being a bad break,” Marrone said. “He was in shape. He was doing really well. We were real excited. He’s devastated, obviously, because it shows that he put a lot of working in coming in.”

The Jags signed oft-injured tight end Tyler Eifert in free agency and have James O’Shaughnessy returning from a 2019 knee injury, so they have depth at that position.

They’re running out of options along the defensive front, though.

Veterans Al Woods and Lerentee McCray opted out because of the coronavirus pandemic. Second-year pro Dontavius Russell (hip) and fellow defensive tackle Brian Price (knee) were hurt in the opening days of camp and placed on injured reserve.

“Some of these young guys that we have, have to step up, and we have to get them ready to go,” Marrone said, adding that the team could find help by signing players cut by other teams or via potential trades.

Gunter saw several heart specialists in the last three weeks and was told if he continues to play football with his condition he could possibly rupture or tear his aorta, which could cause death or a severe stroke.

He added that surgery was an option, but his aorta isn’t large enough to meet the criteria. So he walked away from football for now — quite possibly for good.

Jernigan visited last week, signed Monday and was on the practice field an hour later in a No. 98 jersey — the same one he watched John Henderson don as a kid growing up in Jacksonville and nearby Lake City.

“I was glad I was able to come out and start knocking the rust off a bit and getting acclimated to everything: the scheme, the climate, all that good stuff,” Jernigan said.

Jernigan is the fourth defensive linemen to sign with Jacksonville in the last week or so, a string of injuries (along with a couple of opt outs) that have left Marrone in an all-too-familiar spot. Whether it's bad luck or karma, Marrone said he's never experienced anything like it during his nearly three decades of coaching.

“Part of the challenge,” Marrone said.