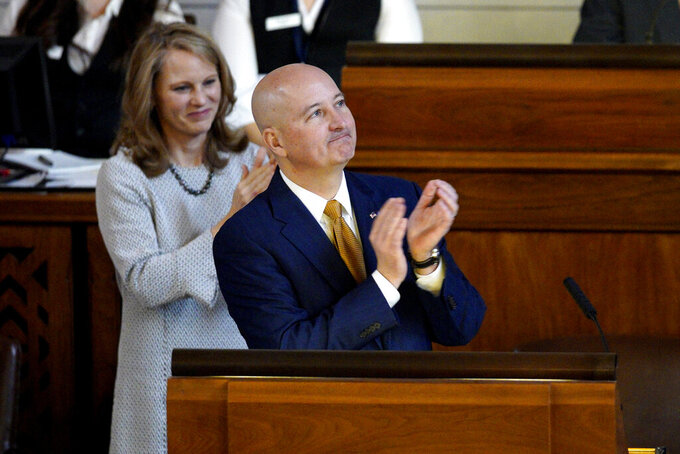 FILE - In this Jan. 15, 2019 file photo, Neb. Gov. Pete Ricketts, with first lady Susanne Shore behind him, acknowledges veterans sitting in the visitor's balcony during his annual State of the State address to lawmakers in Lincoln, Neb. Gov. Ricketts and first lady Susanne Shore have gone into quarantine after both were exposed to a person with the coronavirus, the governor's spokesman announced Tuesday, Nov. 10, 2020. (AP Photo/Nati Harnik File)

OMAHA, Neb. (AP) — More Nebraska cities are passing mask mandates as the number of virus cases continues to surge across the state, but Gov. Pete Ricketts continues to reject the idea of a statewide mask mandate.

Kearney and Beatrice passed mask requirements Tuesday to join Lincoln and Omaha as Nebraska cities that require people to wear masks. Several other cities, including Grand Island and Hastings, are also considering approving mask rules, according to the Omaha World-Herald.

“In my heart of hearts this is something we need to do to defeat this. COVID is something you don’t want to mess with,” Kearney Mayor Stan Clouse said before the City Council voted unanimously to enact the mask ordinance. Kearney's rule will go into effect Monday and last at least through Feb. 23.

Statewide, masks are required at businesses where employees and customers are in close contact for more that 15 minutes, such as at salons and barbershops, but Ricketts continues to resist requiring them in all circumstances. The Republican has said he believes educating people about the benefits of wearing masks is more effective than a mandate, which he believes will generate resistance.

In Beatrice, the local Board of Health passed a rule requiring masks in all indoor public spaces because virus cases have been rising steadily in the area. But Beatrice Police Chief Bruce Lang said he doesn't expect to be ticketing people for not wearing masks.

“I can’t stress this enough that our hope is that we have voluntary compliance,” he said.

Nebraska officials said 2,204 new virus cases were reported Tuesday to give the state 103,805 cases. There were also 19 new deaths reported to push the state's total up to 816, according to the state's online virus tracker.

The number of people hospitalized with the virus set another new record Tuesday when it increased to 978 from the previous day's 938. The number of hospitalizations is straining hospital capacity across the state, and it has more than quadrupled since the start of October.

Ricketts has said he will impose additional social distancing restrictions if the number of hospitalizations approaches 1,200 because that would mean that COVID-19 patients account for 25% of all hospital patients statewide.

Nebraska continues to have the sixth-highest rate of new cases in the country. Over the past week, one out of every 120 people in the state has been diagnosed with COVID-19.

The number of deaths the state is reporting is also on the rise. On Tuesday, the seven-day rolling average of deaths reported each day was 12.43, up from 7.57 per day on Nov. 3.