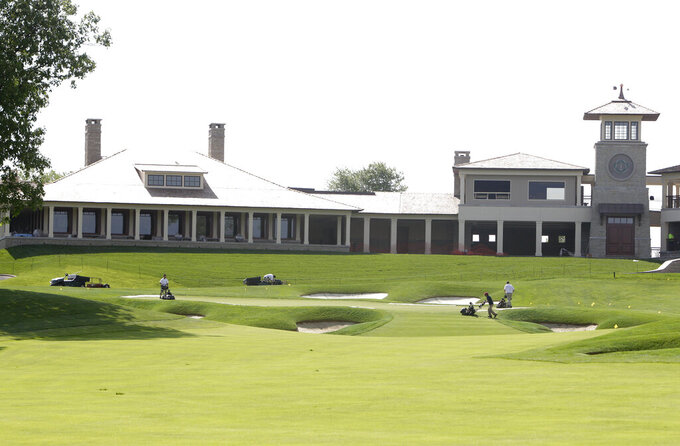 FILE - This Wednesday, May 22, 2013, file photo shows the clubhouse and 18th fairway at Muirfield Village Golf Club in Dublin, Ohio. The challenge for the PGA Tour is to make it feel different to the players who will be in Dublin, Ohio, the next two weeks. For the first time in 63 years, two PGA Tour events are being held on the same golf course in consecutive weeks.(AP Photo/Jay LaPrete)

Notes: Tiger Woods is playing for the first time since the Genesis Invitational at Riviera on Feb. 16, when he finished in last place. ... Woods is a five-time winner at the Memorial. He needs one victory to set the PGA Tour career record that he shares with Sam Snead at 82. ... This is the second straight week for a PGA Tour event at Muirfield Village. Last week's Workday Charity Open was a one-time event that replaced the canceled John Deere Classic. ... The 133-man field features 89 players at Muirfield Village last week. ... Brooks Koepka was planning on skipping the Memorial until he missed the cut last week. He now plans at least five in a row through the PGA Championship at Harding Park. ... The world ranking is so close at the top that Webb Simpson will have a mathematical chance at reaching No. 1 for the first time in his career. ... Muirfield Village will close after the Memorial for major renovations, mainly redoing all of the greens. ... Harris English returns to competition after testing positive for the coronavirus. ... Bryson DeChambeau is coming off a three-shot victory in Detroit. He did not play last week. ... The winner gets a three-year exemption.

Next tournament: LPGA Drive On Championship on July 31.

Next tournament: The Ally Challenge on July 31.