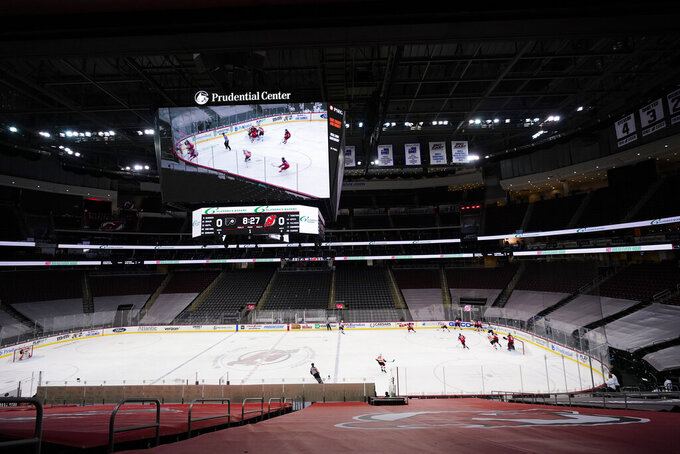 FILE - In this Tuesday, Jan. 26, 2021 file photo, the Philadelphia Flyers play the New Jersey Devils at a nearly empty Prudential Center during the first period of an NHL hockey game in Newark, N.J. New Jersey Gov. Phil Murphy says fans will be allowed to attend sports and entertainment events at the state’s largest facilities in limited numbers starting next week. Speaking Monday, Feb. 22 on the WFAN sports radio station, the Democratic governor said that New Jersey venues with an indoor seating capacity of 5,000 or more will be allowed to have 10% of those seats occupied by fans starting on March 1. (AP Photo/Frank Franklin II, File)

He also relaxed limits on the number of people that can gather for religious services.

New Jersey venues with an indoor seating capacity of 5,000 or more will be allowed to have 10% of those seats occupied by fans starting on March 1, the Democratic governor said on the WFAN sports radio station.

Murphy said he decided to allow the limited in-person attendance after reviewing a vast array of coronavirus-related statistics including hospitalizations, the number of hospital admissions versus discharges, overall positivity rate for COVID-19, and the rate of transmission, and determining that small crowds can be permitted safely.

He said face coverings and social distancing will be required at these venues.

The order applies to the state's major arenas, including the Prudential Center in Newark, where the NHL's New Jersey Devils play, and outdoor stadiums including MetLife Stadium in East Rutherford, home to the NFL's New York Giants and Jets.

The governor said about 1,700 to 1,800 fans should be allowed to attend Devils hockey games under the new rules.

“This is a day toward which our entire staff has been planning, working and looking forward to for the past 11 months," said Devils President Jake Reynolds. “Those who enter the building will feel confident that our process and protocols are focused on making their safety the number one priority."

Murphy said he is optimistic that by the time the NFL season begins in September, capacity limits may be further raised, barring any major setbacks in dealing with the pandemic.

The Giants and Jets issued a joint statement praising the move and hoping for additional leeway before the season starts.

“As the months go on, we are hopeful that the data will continue to be positive and the number of people allowed into MetLife Stadium will steadily increase,” they said. “We missed seeing our loyal fans at stadium events this past year and are excited to welcome them back in 2021.”

Rutgers University, however, said it is bound by tighter restrictions that will prevent them from selling tickets to the general public, at least for now.

“Despite this increase, Rutgers athletics will abide by the Big Ten Conference requirement that fan attendance be limited to the four tickets allotted to each coach and student-athlete for family members only,” the university said in a statement after Murphy's announcement.

The order also applies to large concert venues, although it remains to be seen how many acts will play to a 90% empty hall.

“It truly comes down to the artist that is willing to play selling only 10% of the room, which will determine the number of acts we can accommodate,” said Joe Lupo, president of the Hard Rock casino in Atlantic City, whose concert arena seats 6,000 — and which would only be able to sell 600 tickets for a show. “The production costs and travel, along with a much smaller gate, will inhibit the number of acts until the number gets much larger.”

In a related announcement, Murphy also said parents or guardians of collegiate athletes will be able to attend their children's games effective immediately, a step that was recently taken for high school athletics.

Later in the day, Murphy also announced that greater numbers of people will be able to gather for religious services.

Such events, including wedding ceremonies, funerals, and memorial services that involve a religious service, will be able to operate at 50% capacity of the room in which they are held, with no cap on the number of individuals permitted to attend. Services were previously limited to 35% of the room, up to 150 individuals.