Natiruts, Marley, Aparicio sing for unity of the Americas 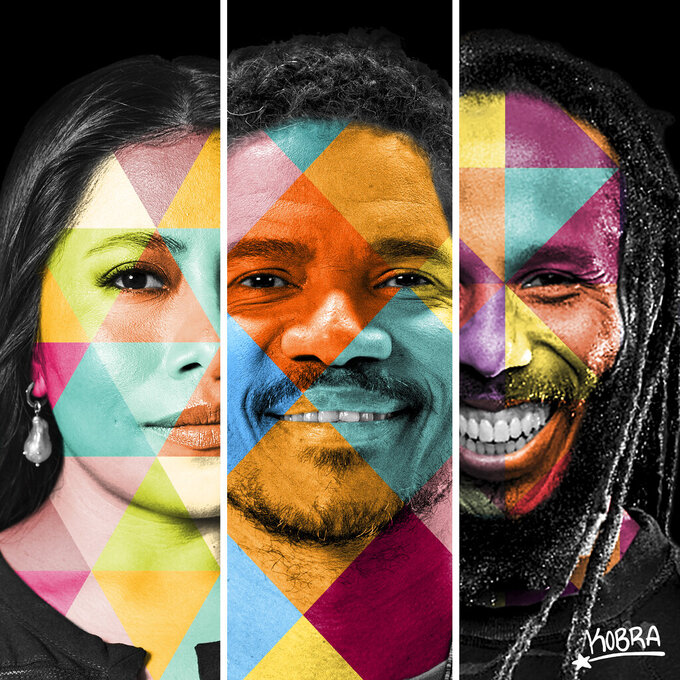 NEW YORK (AP) — With a trilingual song that calls for the people of the Americas to unite in a more fair and loving world, Brazilian reggae band Natiruts, Jamaican musician Ziggy Marley and Mexican actress Yalitza Aparicio hope to make the whole continent vibrate.

“América Vibra” was released Wednesday — the day of President Joe Biden's inauguration — as a nod to a new beginning.

“We don't want walls. We are bridges,” recites the Oscar-nominated actress in Spanish before Marley and Natiruts vocalist Alexandre Carlo sing about social justice and environmental protection in English and Portuguese, respectively.

“América Vibra” includes a musical video directed by Rick Brombal which combines images of the Brazilian Senate, the White House and other iconic places covered or surrounded by vegetation in an allusion to the power of nature over that of men. The single's cover image, which shows the faces of the three artists painted in colorful geometric figures, was developed by Brazilian muralist Carlos Eduardo Fernandes Léo, better known as Kobra.

“The idea (for the song) arose in 2019, before the pandemic,” said Carlo in a recent interview with The Associated Press from his home-studio in Brazil's capital, Brasilia. Natiruts, a reggae band with a career of over 25 years, planned to include it in a DVD recorded at the Luna Park in Buenos Aires, Argentina, after playing in Mexico, Paraguay, Chile and Puerto Rico, but the coronavirus pandemic disrupted the plan, he explained.

Months later they decided to continue on.

“The purpose was the same, the unity of the Americas,” Carlo said.

And with this in mind they invited an English-speaking colleague based in the United States to give more “legitimacy to the song” — the son of legendary Bob Marley, like his father a musician and an activist.

For the Spanish part of the song, they wanted a woman, and Aparicio, an actress and activist of Mixtec origin, provided even greater representation.

For the “Roma” star, her spoken music debut — she says she cannot sing — was about “experimenting another phase and discovering what would happen.”

“What drew me to this project was the message that it carries... the intention of sharing with the world something as important as unity, and what better way than doing it through a trilingual song, through music,” Aparicio said in a Zoom interview from Mexico City.

“Besides, it's a collaboration with two big reggae stars. No one could have said no!” she added with laugh.

In a press release, Marley said that collaborating with Natiruts and Aparicio was “a great pleasure.”

“My lyrics is talking about realizing what’s going on with the environment and wanting to see some justice in the world,” he said. “We have to take care of the planet, take care of each other and just build a better world together.”

The decision to release “América vibra” the same day as Biden’s inauguration had to do with the hope for change.

“It's the victory of dialogue, the victory of calmness, the victory of unity over other leaders that emerged in the world that have a way of communication that is more violent, more aggressive, more denying of science, for example; intransigent,” Carlo said.

“I know that we can expect a lot from the incoming administration, but we can do more than sit and wait, we need to act," added Aparicio. “Everyone can do a bit from where they stand if we want to see a real change.”