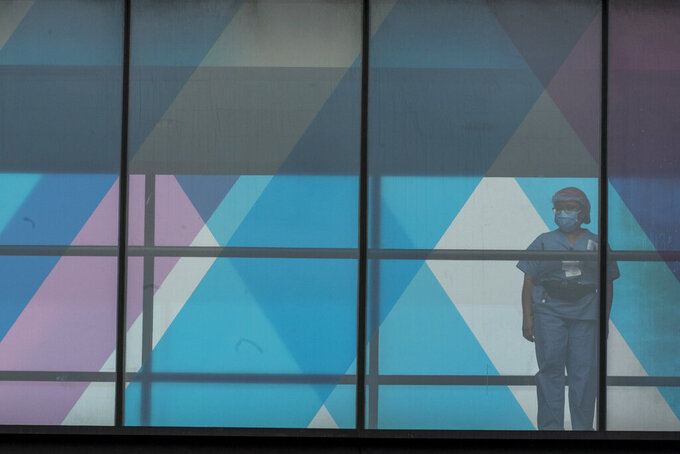 FILE - In this Tuesday, March 16, 2021, file photo, a health care worker watches a rally by New York State Nurses Association nurses from New York Presbyterian and Mount Sinai from an overpass at Mount Sinai Hospital, in New York. The Biden administration has exempted most employers from long-awaited rules for protecting workers from the coronavirus, angering labor advocates who have have spent more than a year lobbying for the protections. The Labor Department included only health care workers in its new emergency temporary standard published on Thursday, June 10, 2021. (AP Photo/Mary Altaffer, File)

NEW YORK (AP) — The Biden administration has exempted most employers from long-awaited rules for protecting workers from the coronavirus, angering labor advocates who had spent more than a year lobbying for the protections.

The rules require employers to draw up a virus protection plan, and tighten requirements for recording and reporting COVID-19 cases among workers. They also require employers to provide workers with paid time off for COVID-19-related absences, including getting vaccinated and recovering from the shot's side effects.

Rather than issue mandatory rules for other workplaces, the Biden administration released new nonbinding guidance that relaxed some recommendations. Most workplaces where people are fully vaccinated no longer need to provide any protection from the coronavirus, according to the guidance issued by Occupational Health and Safety Administration, the federal agency responsible for protecting workers. In separate order, Biden government also lifted a 25% cap of employer capacity inside federal buildings, though it kept in place flexible remote work policies.

The decision comes as many stores and other companies are already relaxing mask and other protection policies in response to new guidance from the Centers for Disease Control and Prevention. But it also represents a step back from President Joe Biden's earlier indications that he would reverse the Trump administration's refusal to issue mandatory protection rules for workers.

The new standard “represents a broken promise to the millions of American workers in grocery stores and meatpacking plants who have gotten sick and died on the frontlines of this pandemic,” Marc Peronne, president of the United Food and Commercial Workers Union, which represents 1.3 million workers, said in a statement.

Debbie Berkowitz, a former OSHA official who now works at the National Employment Law Project, said the new rules fail to protect many low-wage workers, such as slaughterhouse employees who work shoulder-to-shoulder on production lines.

"We are glad that OSHA is finally moving to protect health care workers, but disappointed that they failed to protect all other workers at risk,” Berkowitz said.

Biden raised expectations for an emergency standard covering all workplaces when he signed an executive order soon after taking office, giving OSHA until March 15 to issue the rules. But the Labor Department missed that deadline, and the landscape surrounding the pandemic shifted, with vaccination rates rising and the CDC relaxing its own guidance surrounding distancing and masking.

Labor Secretary Marty Walsh cited the changed reality and the new CDC guidance in a House Education and Labor Committee hearing Tuesday, where he faced questions from Democratic lawmakers about why the standards would not cover workers outside health care.

OSHA had no rules for workplaces to navigate disease outbreaks on the scale of a pandemic. While some state agencies issued temporary emergency standards, the Trump administration issued only guidance for how employers should protect workers.

Labor advocates had hoped new federal standards would signal Biden's commitment to strengthening OSHA, which has been criticized for conducting few inspections and issuing fewer citations over COVID-related complaints.

In statement, U.S. Rep. Bobby Scott, the Democratic chairman of the House Education and Labor Committee, criticized the new standard as “too little, too late for countless workers and families across the country.”

OSHA said the standard, which will be in place for six months, was justified for healthcare workers because the virus poses “a grave danger” to them. The agency noted nearly 500,000 health care workers have contracted the virus as of May 24 and more than 1,600 of those had died.

Jonathan Snare, a former acting assistant secretary of OSHA during the George W. Bush administration, said the federal watchdog must prove that a situation poses “grave danger” when issuing emergency temporary standards. Snare, a partner at Philadelphia-based global law firm Morgan Lewis, said the Biden administration likely felt it could face legal challenges from other workplaces if it imposed stringent regulations as the pandemic starts to recede.

Many employers, however, had hoped for a firm set of rules since the start of the pandemic, said Brian Kropp, chief of research of consulting firm Gartner’s human resources practice. The latest nonbinding guidance adds more uncertainty, especially for companies grappling with when and how to bring employees back to offices, Kropp said.

Only a small fraction of companies, for instance, plan to ask employees about their vaccination status before returning to work. That makes it hard for companies to decide whether they can drop safety standards for vaccinated employees, Kropp said. The new guidelines say employers should implement distancing and provide masks for unvaccinated workers, customers and visitors.

“What employers want is simplicity and clarity and hard-and-fast rules they can follow,” Kropp said. “It allows them to say they are just following rules, rather than having difficult conversations with employees about one set of activities versus another. It lets them pass the buck."