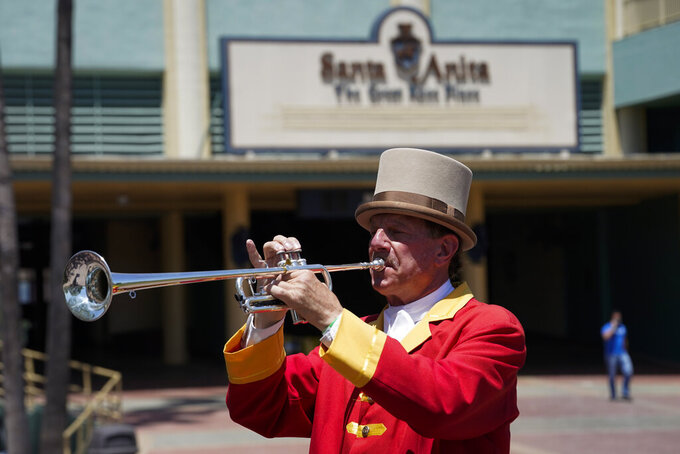 In this Friday, May 22, 2020 photo, bugler Jay Cohen blows "Call to the Post" to the empty grandstand, a tradition maintained for those watching via simulcast, during a day of horse racing at Santa Anita Park in Arcadia, Calif. Horse racing returned to the track after being idled for one and a half months because of public health officials' concerns about the coronavirus pandemic. (AP Photo/Ashley Landis)

ARCADIA, Calif. (AP) — Horses are thundering down the stretch again at Santa Anita. There are no fans or owners cheering them on. No photos in the winner’s circle. No bets placed at the track's windows.

Still, it’s a win for the sport to be back racing against the backdrop of the San Gabriel Mountains after being idled for 1 1/2 months because of the coronavirus pandemic.

“We were going to be willing to do whatever it took to get it open,” said Bob Baffert, the two-time Triple Crown-winning trainer.

From March 12-27, the track northeast of Los Angeles raced without spectators. Then the Los Angeles County Public Health Department shut it down, saying it wasn’t an essential business.

“It was sort of disappointing that we didn’t get any acknowledgement that we’re so safe here,” said Baffert, who at 67 is among an age group considered vulnerable to COVID-19.

Baffert compared Santa Anita’s stable area to a hospital with a similar level of disinfecting that goes on.

“If anybody was prepared for something like this, it’s the backside,” he said. “We always keep a very clean environment back there because we don’t want viruses to come in and get the horses sick. Our grooms wore masks and gloves before this started.”

Santa Anita received approval to resume racing May 15 with new protocols in place.

Without fans eating, drinking and gambling, track owner The Stronach Group has let go half of Santa Anita’s workforce, mostly on the hospitality side, according to Aidan Butler, TSG’s executive director for California racing.

Face coverings and daily temperature checks are mandatory, and everyone who passes inspection slips on green wristbands. Social distancing is required, too, although with 320 acres to spare, there’s little chance of overcrowding in the Art Deco grandstand or stable area that houses about 1,700 horses and 750 workers who live onsite.

“I think it’s a little overkill,” said Baffert, who lowered his bandana during an interview while keeping his distance. “It’s the same people working with the same horses everyday. We’re all educated enough now to figure out what we need to do.”

“I don’t see anybody not wearing a mask back there, I don’t see anybody congregating. That’s not so everywhere else,” Mandella said from behind a white mask. “We’re leading a pretty good example. I just think racing should get some credit.”

Saddling and prerace routines have changed to increase physical distancing.

Jockeys aren’t allowed in the stable area, so they don’t interact with trainers, who used to give them a leg up on their mounts in the paddock. Now the horses are led by grooms from their stables to the receiving barn. Then they join up with a pony to accompany them through the paddock and onto the track.

Bugler Jay Cohen blows “Call to the Post” to the empty grandstand, a tradition maintained for those watching via simulcast.

“We miss the fans so much,” Mandella said. “To come over here and to have empty stands and nobody here is a sad feeling.”

One of the benefits to being the only game in town is an increase in wagering via simulcast and online. The total handle for nine races on May 15 was $11,207,076. That’s a huge boost from the same day in 2019 when the handle was $6,974,738 for eight races. Bettors typically focused on the NBA and NHL playoffs and major league baseball this time of year have no action to wager on, so they’re turning to horse racing. Many casinos have yet to reopen, too.

“You got to take the positives out of the negative,” Butler said.

In an effort to comply with public health officials, Santa Anita created a so-called restricted zone, housing 24 jockeys, valets and other personnel who must test negative for COVID-19 to gain access. Butler leaves a house overlooking the track where he lives with his wife to stay in the compound on racing days.

They reside in plush trailers — the same ones used for actors on television and movie sets — located in a parking lot next to the regular jockeys’ room. They’re divided by a wall, allowing two riders to share the same trailer but with separate entrances, living areas and bathrooms. Veteran rider Aaron Gryder shares a trailer with Triple Crown-winning jockey Mike Smith.

They’re required to live at the track on racing days, which meant Smith bid farewell to his wife of 16 months on Friday. The couple won’t reunite until after Monday’s races. Gryder joked about overhearing Smith, including his mushy phone calls.

“I got to tell Mike to keep his singing down,” Gryder cracked. “He’s not real good.”

“I’m sure other sports are looking at the success we’ve had over the last week and they’ll want to model what we’ve done,” Gryder said.

After the races, the track hosts the riders for dinner catered by local restaurants and movies in the 100-to-1 Club perched three floors above the first turn. It’s spacious enough for them to keep their distance from each other while still swapping stories or playing video games.

“I feel like I’m on vacation,” said Victor Espinoza, who rode American Pharoah to the Triple Crown in 2015.

Last weekend, Smith, Espinoza and Gryder counseled their younger counterparts about saving their earnings and investing.

“It’s been kind of neat to be all together after the races are over,” Smith said. “It’s brought us all closer together. I’ve gotten to know a lot more about these boys and I’ve known them for several years.”

While enjoying the track’s five-star trailer park, Smith and the others know that racing without cheering fans, grumbling bettors clutching losing tickets and owners who pay the bills isn’t anyone’s idea of a good time.

Los Angeles County has been the hardest hit by coronavirus among California’s 58 counties. As a result, many businesses have been slow to reopen, restaurants remain mostly drive-through or takeout, and other professional sports have yet to resume.

Mandella hopes that once fans are free to return, track attendance swells and pent-up excitement bubbles over.

“There’s nothing like taking something away from somebody to make them want it more,” he said. “I’m hoping that’s the good that’s going to come out of this fiasco we’re going through.”